I’m not what you’d call the biggest sci-fi fan in the world. I mean, I suppose you could call me that if you wanted, but you’d be wrong. Even though it’s not my favorite, or even third or fourth favorite genre, however, I can still find plenty to enjoy in a sci-fi story as long as it’s written well and is filled with interesting characters. Great writing can transcend genre preferences, but unfortunately, the first issue of Dark Horse’s new series, The Quantum Age doesn’t quite grab me the way I had hoped. It’s not a bad read by any means; just one that left no real impact.

The main culprit here is probably the fact that the story feels so familiar. We are centuries into the future when the book starts. After years of war, the world is now run by a fascist government which is hostile to outsiders. In this case, Martians. However, a rogue Martian sneaks about looking to recruit those who would help him in some sort of resistance against the government and the officials that work for it. Sound familiar? Yes. Yes it does. It’s the same kind of plot that we’ve seen, read, listened to, etc. for so many years and I was a little disappointed that a story that was filled with so many colorful characters was content to reside in the same trope-filled narratives that have been done thousands of times before. 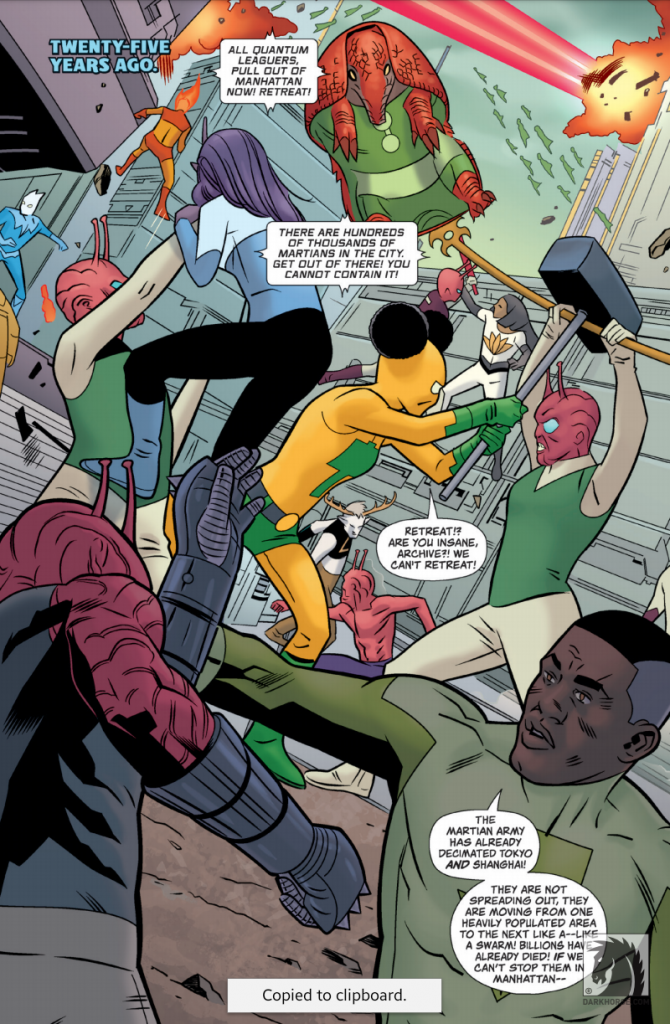 The characters that writer Jeff LeMire and artist Wilfredo Torres have created for The Quantum Age are easily the highlight of the book; at least from an aesthetics perspective. There’s a high level of gleeful creativity on display here and I was instantly interested in spending some time with these crazy looking space heroes. Many of them are reminiscent of comic book characters we’ve known for years, but it seemed to be done in way of homage to them as opposed to ripping them off. There’s Storm Girl, Hammer Lass, Archie V, Modular Lass, just to name a few. Their names are even a little tongue in cheek in a way that references the golden age of comic book characters, which I think is a great touch. The best one, however, is a floating space armadillo named Erb who, incidentally, seems to be the most powerful one. In case you need to know why he’s such a cool character, see my previous sentence. Floating Space Armadillo. Unfortunately, it seems as if many of these guys were a factor some 25 years before the story of issue #1 started and even though a few of them showed their face by story’s end, there’s no telling how much more we’ll get to see them, if at all. 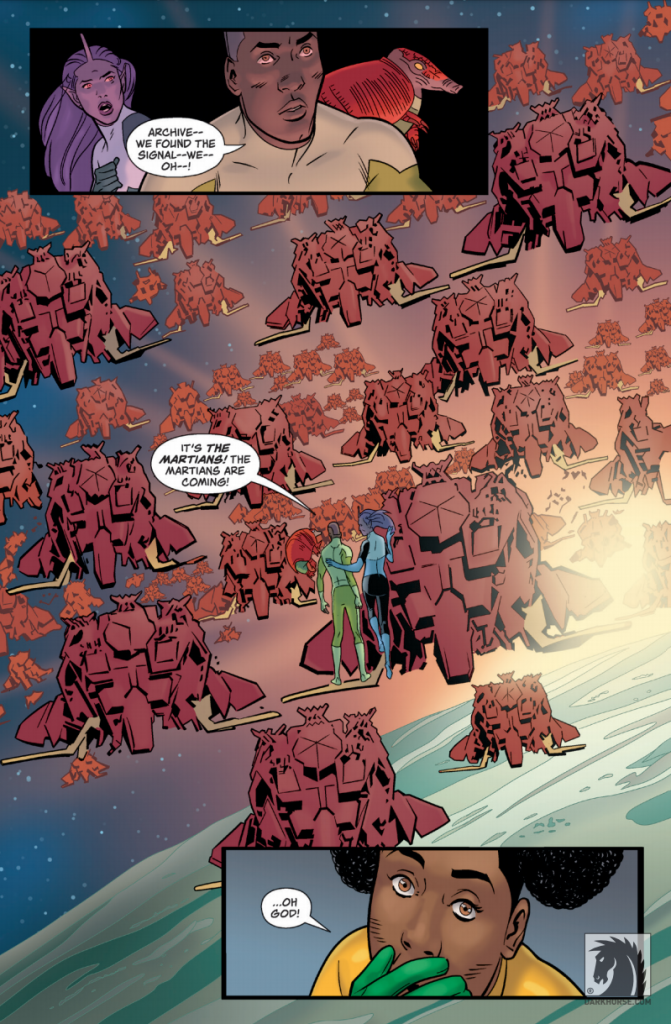 The artwork compliments the colorful characters sufficiently as well. It’s a simplistic style and there’s not a large amount of detail on the character models or on the backgrounds, but this isn’t a failing as it seems to be a stylistic choice. The story of The Quantum Age is advertised as being set in the world of Dark Horse’s other comic line, The Black Hammer, so obviously the two need to match somewhat aesthetically, so it makes sense whether you like the art style or not.

When it’s all said and done, however, this story is, sadly, just largely forgettable. As soon as I was done reading it, I had a hard time recalling what had just happened in the book, and that’s never a good thing. It probably has a lot to do with the fact that the story is just far too familiar to really jump out and grab you. The characters are great and I love their design, but the world they’re playing in is just too devoid of new ideas so far to get me excited about reading more. Again, it’s not a bad story by any means and if you love sci-fi and don’t need a lot of new ideas to be entertained, you may really dig it. For me though, I’ll have to remain skeptical until I see the narrative go somewhere else.