It’s difficult to condense Captain America’s exploits down to a bite size “best of” list. After all, the man’s been around since World War II and he’s been a part of some amazing storylines, as well as some…. not so great ones. With that being said, we here at Bounding Into Comics are never ones to shrink from a challenge! Knowing that “best of” lists can never and will never be completely objective, this here is my PERSONAL list of what I view as Captain America’s greatest stories. Not all of you will agree, and heck, not even everyone who writes for this website will agree, but that’s OK; everyone has the right to be wrong if they want to. 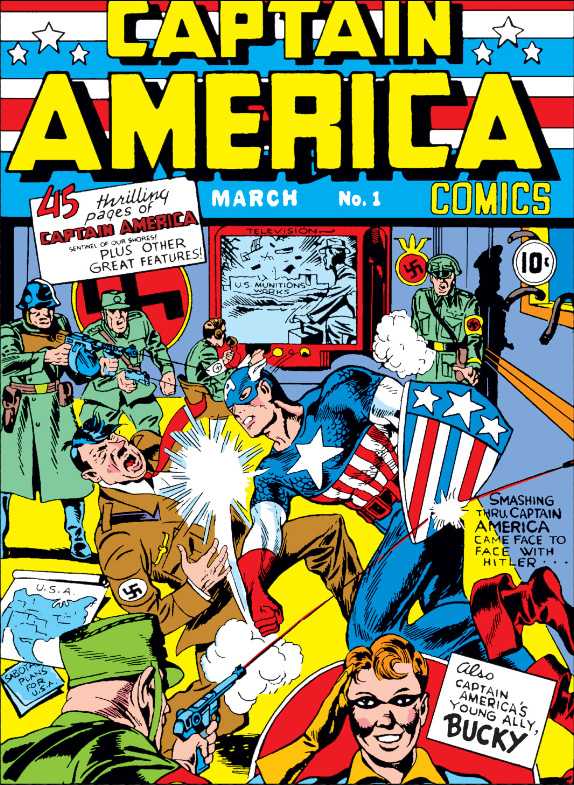 Let’s just start with the classic first issue and get it out of the way. This baby gets points on several things without even taking into account whether or not the actual storyline is any good (it’s actually a collection of several short stories, which was the style at the time). Boasting one of the most famous covers in the history of comics on which the incomparable Jack Kirby depicts Cap decking Hitler, this issue makes the list on legacy alone. While the altercation with Hitler never actually took place in this comic, the issue is notable as it gives the world the first appearance of Cap himself, Bucky, Agent Phillips, Agent X-13, and others on top of showing us Cap’s origin story. 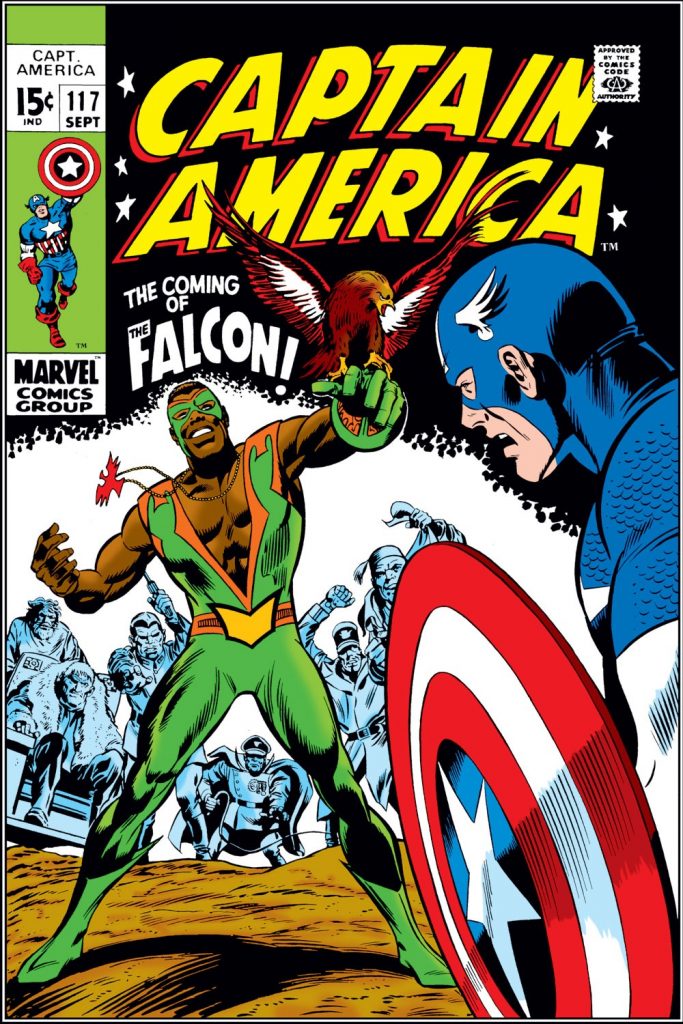 Another issue that makes the list mainly because of its historical significance. Bucky Barnes/Winter Soldier will probably always be Steve Rogers’ most famous sidekick, but Sam Wilson/Falcon is a close second. This issue was written by the great Stan Lee and is significant for its introduction of Falcon, who is an African American character and that is a distinction that was far more ground-breaking back in the late 60’s than it is today. Besides that, the story is actually a lot of fun as well as it is one issue in a longer arc which saw Red Skull fidgeting around with cosmic cubes and switching bodies with Captain America. 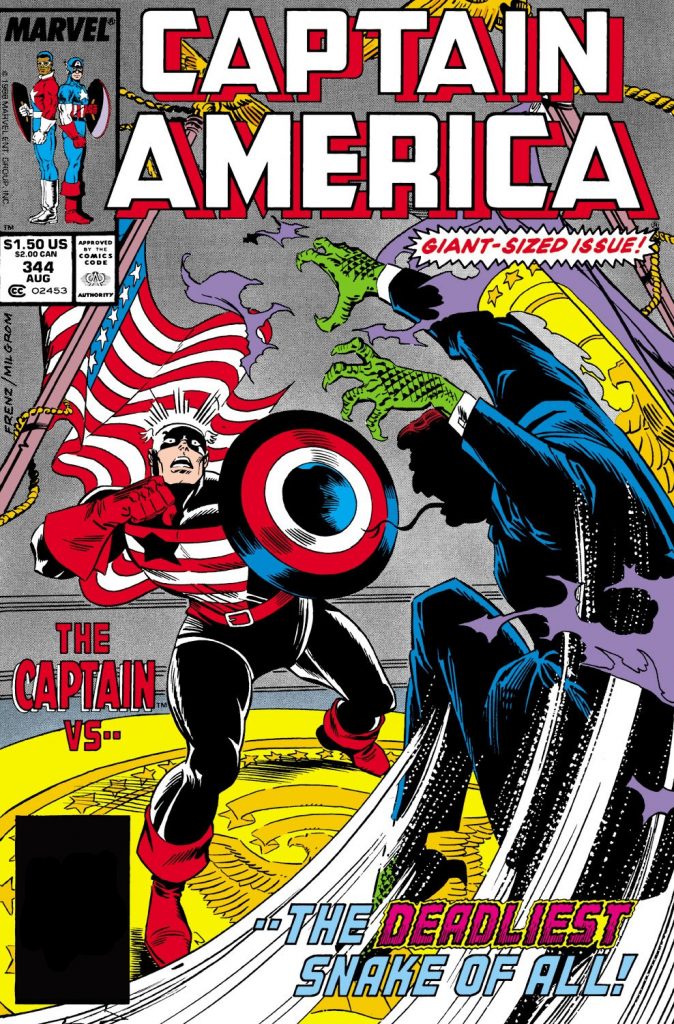 This beauty was a giant size issue that had all sorts of amazing things going on. Steve Rogers, at this point was carrying the moniker of simply, The Captain, but this jam-packed issue also included the then-current Captain America John Walker, Falcon, Diamondback, the entire Serpent Society, but most importantly, POTUS Ronald Reagan! The story revolved around the Serpent Society poisoning the water supply and turning the populous into horrible snake people. The most infamous of their victims was Reagan himself and Cap and the Commander in Chief (as a snake-person) threw down in the Oval Office. It’s a crazy premise that was done completely straight-faced, which makes it all the more awesome! 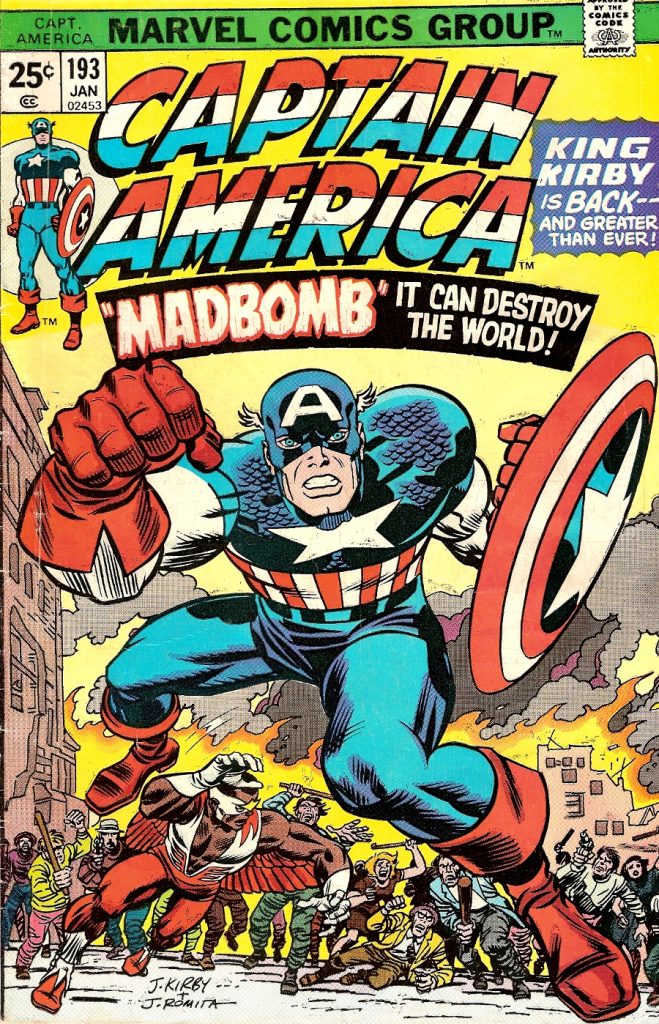 The Madbomb story arc was covered in Captain America #193-#200. The story was entertaining and expansive with Cap and Falcon tracking down a series of Madbombs which were sonic devices that ranged in sizes from tiny to humongous and caused anyone in their range to go crazy and begin attacking one another. These devices were designed by mustachioed Mason Harding, who would go on to earn notoriety by implanting a bunch of false memories into the mind of Steve Rogers. The storyline is so well remembered that it was originally going to be used as the plot for the Captain America 3 movie before they decided to go with Civil War. The best thing about this comic run is that it was written and drawn by The King, Jack Kirby. Also, I have a soft spot in my heart for this story because I have the cover of the first issue on a T-shirt. 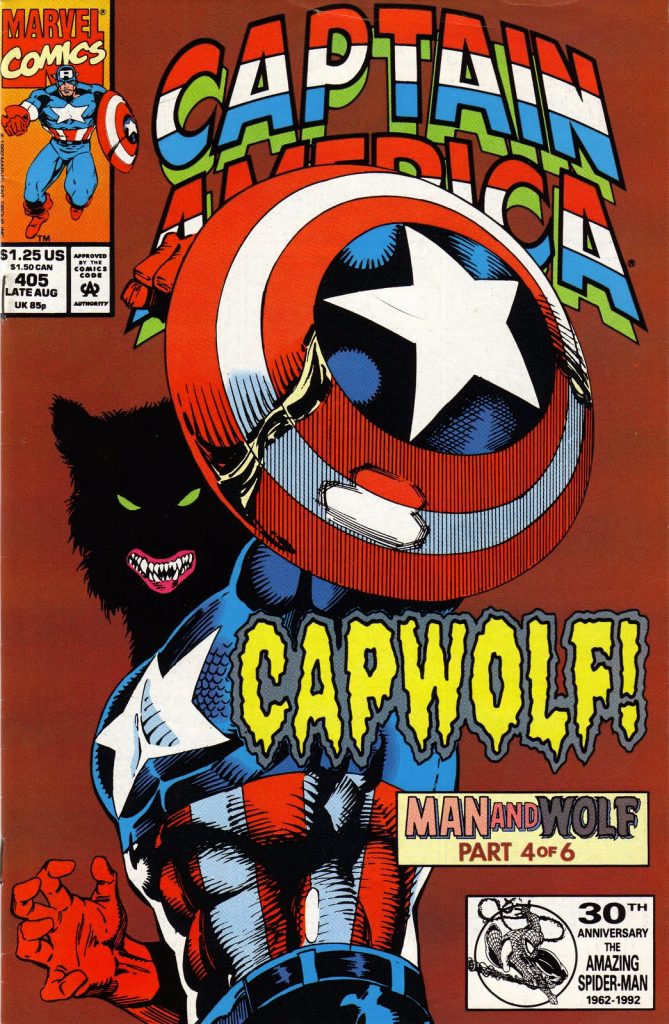 What happens when you take Marvel Comics’ greatest hero and combine him with folklore’s greatest monster? Well you get Capwolf, of course! There have been some strange goings on in the world of comic books, but this one is right up there at the top of both the strange meter as well as the awesome meter! In a story that not only involves Captain America becoming  a werewolf, we also get Wolverine, Cable, John Jameson (Jonah J.’s son) and more. We also get a healthy dose of druid magic and the best part of the storyline is that as a werewolf, Cap kept his wits about him which allowed him to actually be a functioning Capwolf instead of a stark raving animal. Good, crazy, comic book stuff! 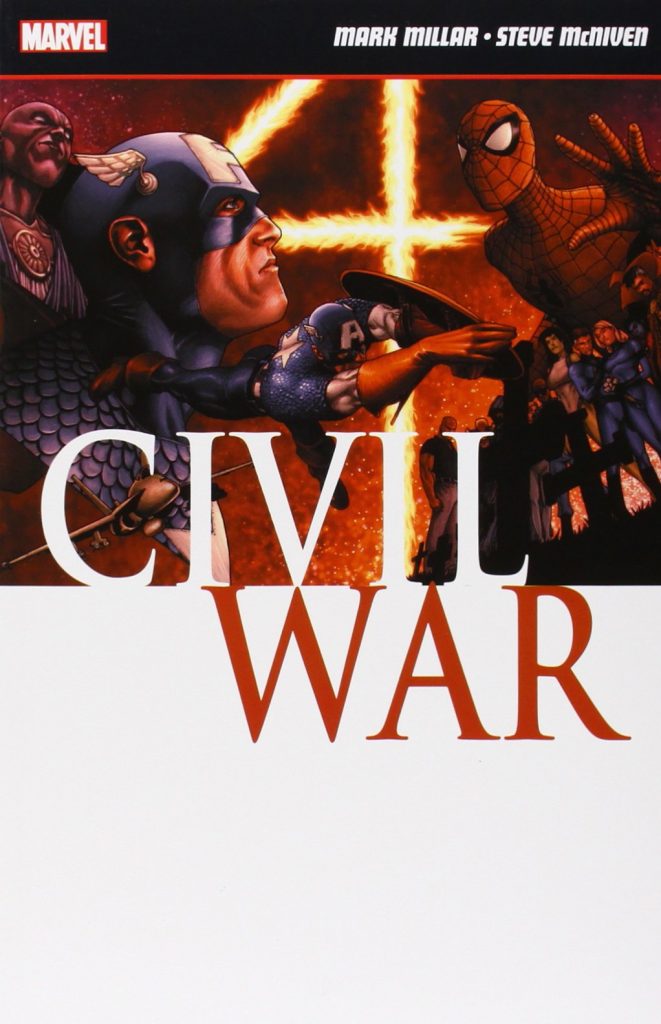 Civil War is one of the best known Marvel Storylines of all time. Thanks in no small part to the film, the comic book version of the story is much more expansive, includes loads more characters, and is more emotionally impactful; especially the finale. Captain America is typically always right, no matter who disagrees with him and we see that on display in this stroy more than any other. Even heroes who were on Stark’s side eventually begin to see things Cap’s way by the final issue. In no other story do we get to see Cap’s determination to do what he believes is right, no matter who stands against him, displayed more emphatically than we do in Civil War. Willing to make the ultimate sacrifice for those around him, Captain America is never more the selfless hero than he is here. 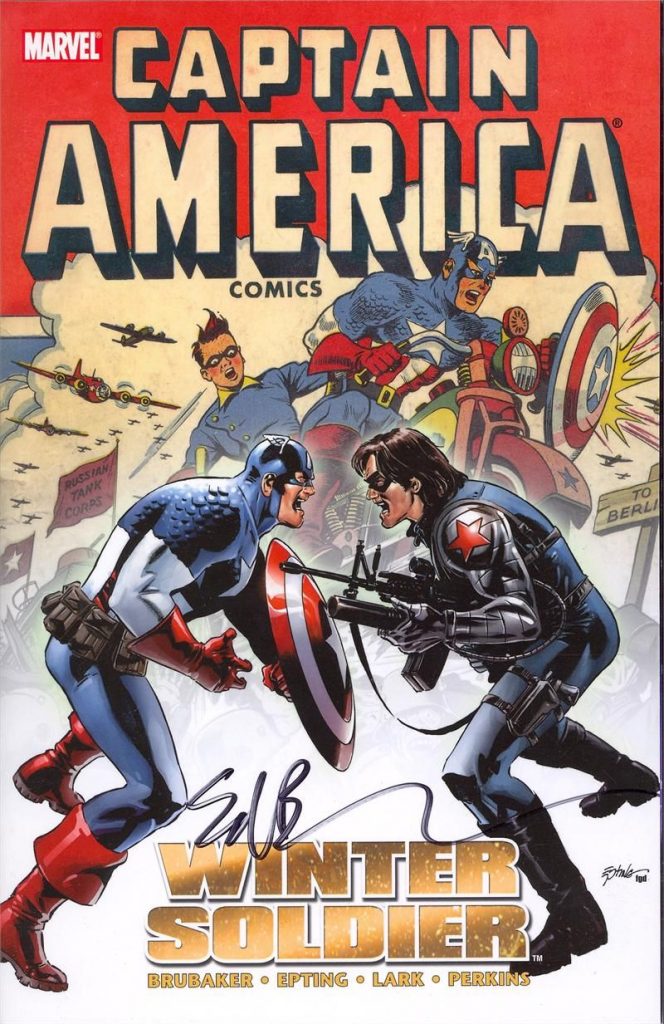 At this point in pop culture, the Winter Soldier is well-known and well regarded as a friend and occasional enemy of Captain America. However, when the Bucky Barnes character first died in the comic, he actually stayed dead for a very long time, especially by comic book standards, for forty years! When he finally came back, lots of fans didn’t know exactly who he was, but his emotional connection to Steve Rogers, coupled with his tragic torture and transformation into a cold-blooded killer, adhered him to fans all over and the rest, as they say…is history 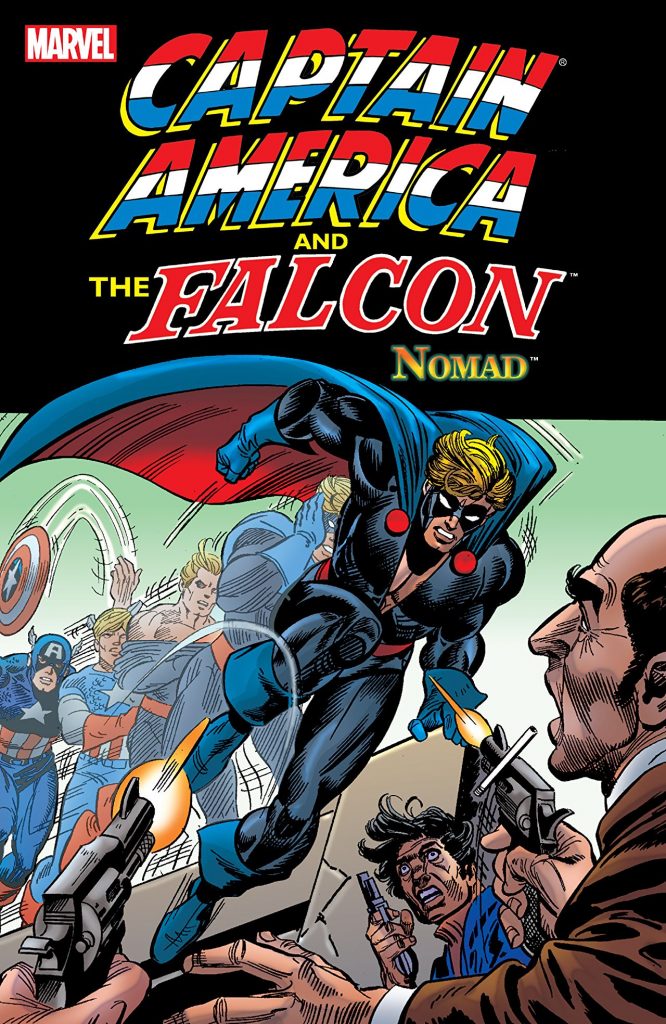 Some people have forgotten (or at least tried to forget) that one of Steve Rogers monikers when not Captain America was The Nomad. Now, Rogers has dropped the whole “Captain America” thing before for various reasons, but none more fantastic than when he did so in order to become The Nomad! Of course, by story’s end he’s back to being Captain America, but for a short time Steve Rogers loses faith in our government and instead of parading around in the ‘Red-White-and-Blue’, he suits up in an absolutely TERRIBLE costume. It’s awful, over-the-top 70’s style over indulgence, and that’s why I love it. It’s so far removed from what you would imagine Steve Rogers to be wearing, but he maintained that classic Cap attitude, which made him still easy to root for, even if he did dress like one of the Village People on Halloween. 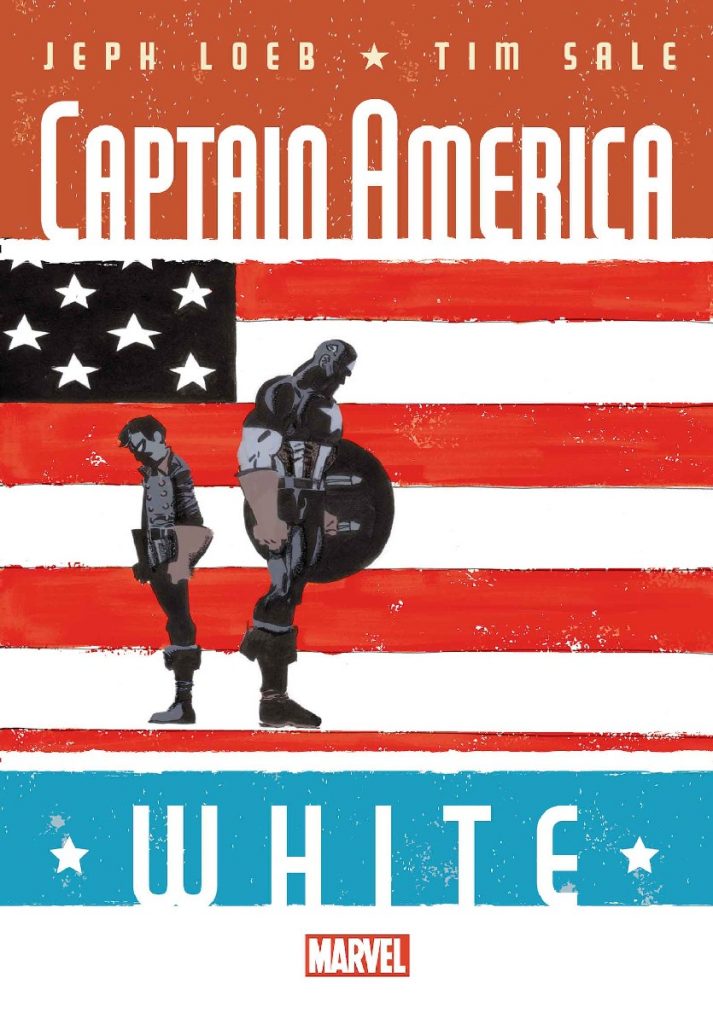 Jeph Loeb and Tim Sale have, together, amassed an impressive library of comic book goodness. Probably best known for their Batman: The Long Halloween/Dark Victory storylines, the storytelling prowess of Loeb and the distinctive beauty of Sale’s artwork make them the best duo in comic books. Besides that stuff though, the story itself is very, VERY good. What sets it apart is that instead of highlighting Cap’s exploits in the current day, White takes place in Steve Rogers’ glory days of World War II. Fighting alongside Bucky, we get an entirely self-contained story that hits some appropriately emotional highlights concerning duty and sacrifice. 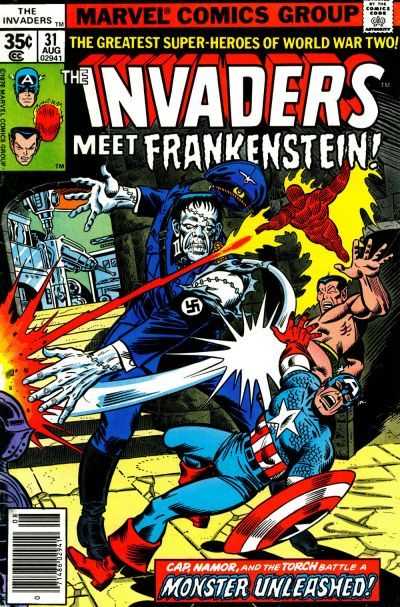 Adding the Sub-Mariner and the Human Torch to a Captain America story should be enough to make it a super-cool tale, but adding in Nazi Frankenstein’s Monster is just icing on the crazy cake. This issue would make my list based on concept alone, but it’s actually a fun read! A bunch of Nazi scientists resurrect the Monster and reprogram him to fight alongside them. It’s a ridiculous premise, but it’s done with a completely straight face and it is one of the purest examples of why I love and appreciate the comic book storytelling medium so much. 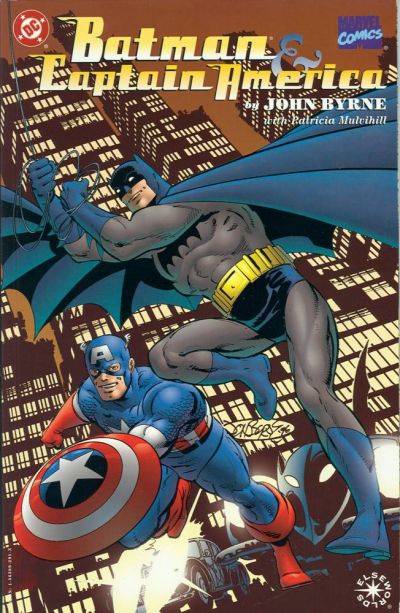 Come on, people, just look at the title for this one. Even if the story sucked, it has Captain America AND Batman in it. Marvel’s best meets DC’s best! Luckily for us, this Elseworlds title is actually very good! Written, drawn, lettered and colored by the great John Byrne, the first meeting between The First Avenger and The Caped Crusader hearkens back to the Silver Age of comics and eschews the more darker elements to give us an optimistic look at these two heroes teaming up (along with Bucky and Robin) to thwart Red Skull and the Joker. This story is famous, in particular, for the scene in which The Joker turns on Red Skull after learning he’s a Nazi. It’s an extremely silly concept, but it sure does make for fun reading!

Well, there you have it, folks. My list of the best Captain America stories. I am quite certain that ALL of you would pick a completely different list, but I feel that these stories do a fantastic job of portraying just how versatile a character Captain America is. Whether he’s fighting for truth and justice, questioning democratic authority, or eating his shield… oh crap! I forgot about the time he ate his shield! Why didn’t I put that one on here!?