Warner Bros. and DC Films are rolling out the hype train for the James Wan-directed Aquaman film. A newly released magazine cover from Den of Geek gives us a whole lot to chew on including Ocean Master and Black Manta’s helmets!

Take a look at this fantastic piece of artwork by DC Comics artists Ivan Reis, Joe Prado, and Marcelo Maiolo: 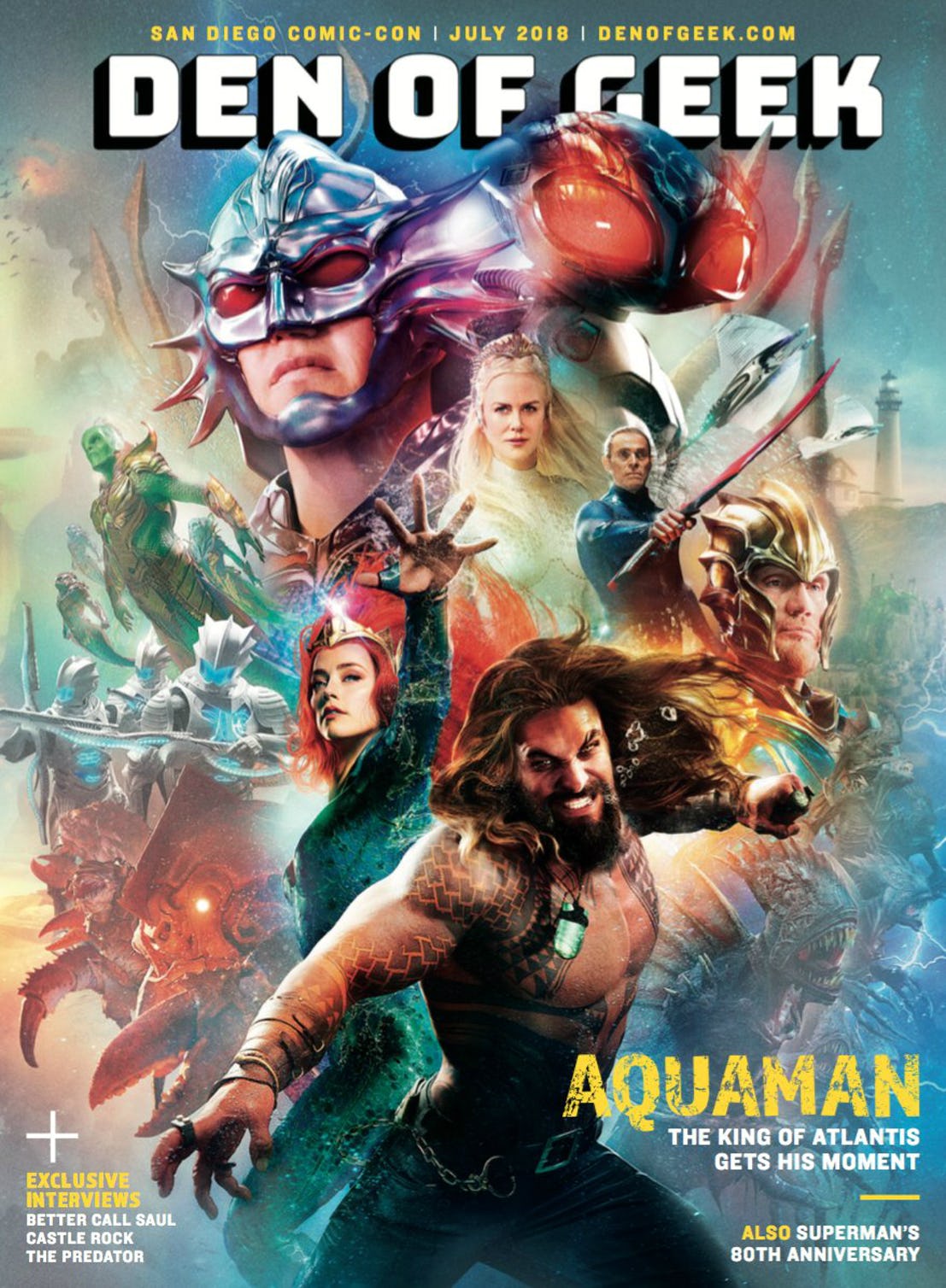 Behind Aquaman stands Mera with her arm extended and her crown shining bright. It definitely appears she is wielding her aquatic abilities. Above Aquaman’s left shoulder is Dolph Lundgren’s King Nereus, who in a major change from the comics is expected to play Mera’s father. Just above him we get our first look at Willem Dafoe’s Vulko, who will more than likely play a trusted advisor to Aquaman. Directly above Aquaman is his mother Queen Atlanna dressed in all white. Finally, at the top of the poster we get an excellent look at Patrick Wilson’s Ocean Master and his helmet. It looks stripped right from the comics! Beside him is Black Manta in what looks to be full regalia. Although this could be the prototype that was recently featured in Entertainment Weekly.

There’s a whole lot more going on in this poster. In the right of the poster you can see a lighthouse. In the comics, this lighthouse is called the Curry Lighthouse and was located just north of the Arthur Curry’s home town of Amnesty Bay.

The poster also features plenty of Aquatic monsters and even Aquatic races. You can see the Fisherman King and his people just below Ocean Master. But there are a number of new creatures we haven’t seen before. There are some kind of crab-like humanoids right next to Mera. Above them appear to be almost future-like warriors. On the right side there are some very prehistoric aquatic creatures that look absolutely menacing.

We know there are seven realms under the water and it’s quite possible a number of these creatures are from the various realms. Collider revealed six of those kingdoms include Trench, Brine, Xebellian, the Fisherman kingdom, the Atlanteans, and the Missing Kingdom. From Collider’s set visit they reveal the Brine are crustaceans that live on the bottom of the ocean. It’s more than likely they are the crab-like creatures on the left. The Trench don’t have eyes and live in the Marianas Trench. They appear to be on the right of the poster.

And if you look right above Vulko’s head you can see some stingray shaped vessels! There’s so much going on in this poster!

Producer Peter Safran described the film,”The movie is in the vein of Indiana Jones. James [Wan] wanted to tell this swashbuckling, fun, quest movie. Just, it’s a great time for everybody to see. So the relationship is a little bit Michael Douglas-Kathleen Turner in Romancing the Stone, which is ultimately a romantic action movie. But, I wouldn’t say it’s actually a romance.”

What do you think of the poster? Are you excited for Aquaman?