Children’s book creator Jed Alexander, who wrote and drew (Mostly) Wordless and Red went after a number of comic book professionals and called them “white supremacists.”

Alexander targeted writer Chuck Dixon, artist Dave Dorman, and creator Ethan Van Sciver on a public Facebook post by Howard Chaykin. Chaykin merely posted the cover to his Image Comics series The Divided States of Hysteria and commented, “I told you last year, but did you listen?”

“There are white supremacists in your industry. They are your peers. I’m talking about: Chuck Dixon, Dave Dorman and Ethan Van Sciver just for starters. Dixon who collaborates with Vox Day, a known white supremacist, on a comic called Alt Hero, an Alt Right superhero. Dorman, who will soon be collaborating with Dixon, and is a supporter of “Comicsgate.” Ethan Van Sciver who has put himself at the center of “comicsgate” a movement that actively harasses and threatens women, people of color and trans people in or related to the comics industry.

It’s easy to say this is none of your business, you know nothing about these people, this has nothing to do with you. But this is your industry. You are known for being outspoken about what matters to you. About racism, about anti-semitism, about right wing extremism. This is your industry and publishers have become quiet enablers. You don’t have to be.

Right now you’re writing a comic about the comics industry. Whether you like it or not, this is a part of that story. You have a voice.“

“I’m with them Howard… Unless they renounce Trump, we should all renounce all supporters/enablers of fascism. Push has come to shove.“

From there Alexander would make it clear he wasn’t targeting Van Sciver, Dixon, and Dorman for being Trump supporters:

“With these guys it’s more than Trump. I’m not just calling out Trump supporters. I did not choose these names casually or arbitrarily. They’re actively supporting white nationalism and white sypremacism.”

Alexander would go on to claim that Van Sciver, Dixon, and Dorman are causing “harm.” He then labeled them as “Alt-Right activists.”

“These individuals are using their voices and positions to cause harm. They’re not your cranky Trump supporting neighbor. The are Alt Right activists.“

He then insinuates that they are sending death threats to people like Lea Seidman.

“This has been the popular way to pretend this isn’t happening for a long time. In the meantime, the death threats keep coming. The harassment continues.

For some people, like Lea H. Seidman, this isn’t hypothetical. They’ve experienced the harassment.“

He would then double down that he specifically targeted Dixon, Dorman, and Van Sciver.

“I deliberately pointed out those individuals because I knew they were unambiguously causing harm. I don’t point at every Trump supporter I see and cry, “Nazi.” And I am under no illusion that I’m going to convert anybody.

But when DC quietly ends their professional relationship with Van Sciver without saying why— without taking a stance— I find that cowardly. Pretending or allowing others to pretend it’s for any other reason than his bigotry, is cowardly. And that’s why I think it’s important for those of us who know, to speak up.

Dixon just broke a record for writing more comics pages than anyone alive in the US. That’s no exaggeration. There’s no pretending his work doesn’t have influence. So I think it’s important that we say: this guy’s behavior is unacceptable. You don’t have to say it, but I’m saying it.

Ignoring these people does not take away their power. It just lets them get away with their behavior under a cloud of ignorance. And this only lets them further twist the narrative in their favor.”

When questioned for proof that Dave Dorman was a white supremacist, he provided a cover image of Barack Obama holding a pistol and sub machine gun, with the seal of the United States cracked in the background. 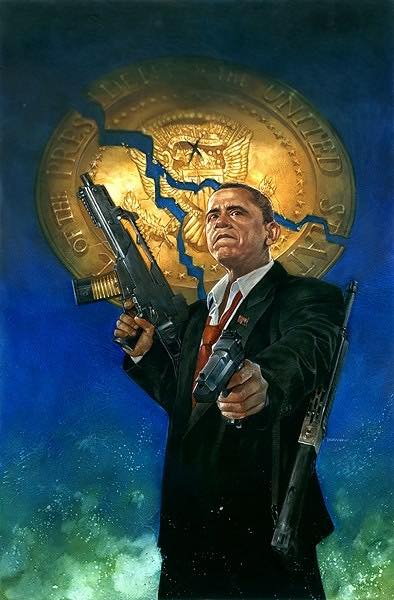 He then claimed the image is proof that Dave Dorman is a “racist enabler of white supremacists.”

He would add, “He’s a big comicsgate supporter and is going to collaborate on a project with Chuck Dixon with an Alt Right agenda. … Very active on the Comicsgate Twitter feeds.”

The cover in question was actually a variant cover for a comic book called The Other Dead by Joshua Ortega and Digger T. Mensch which was published by IDW.

“The world’s first Zombie Animal epic is here! A deadly hurricane threatens New Orleans just as a frightening and mysterious outbreak hits the animal kingdom! Join all-star creators Kevin Eastman (Teenage Mutant Ninja Turtles), Joshua Ortega (Gears of War), and Digger T. Mesch (Agent 88) for the beginning of this year’s most anticipated new horror series! With art by rising star Qing Ping Mui, The Other Dead is destined to be the most talked-about zombie book since The Walking Dead!”

Alexander would admit he jumped to a conclusion. But what’s even more telling is that he admits he doesn’t even know Dave Dorman. However, he would still try and paint Chuck Dixon as a white supremacist.

“Thank you for the context of that image. Obviously I jumped to a conclusion regarding it.

What I know about Dorman, is that he is active on Richard C. Meyer’s threads and pages and supports what Meyer does. Meyer is unambiguously racist and that’s why I found this troubling. I didn’t say Dorman was a white supremacist. I did say Chuck Dixon is collaborating with a white supremacist, Vox Day, on Alt Hero. That is factual. But I made no such claim about Dorman.

I think you’re right: throwing Dorman in with someone like Dixon is not fair in this context.”

“I also found Dorman’s involvement with this project, troubling. Particularly since Dixon is also involved.“

Jed Alexander would then try to explain why he labeled Dave Dorman a “white supremacist” without any evidence and without knowing him at all.

“Again, I don’t know Dorman, but I want to give you some idea of why I came to the conclusions I did. Not that Dorman is a white supremacist, but that he has involved himself with people that have abhorrent and bigoted views about immigrants, gender identity, and race.”

He specifically mentions Timothy Lim and Dixon as people Dorman is involved with.

“I’m being very specific here (because I have to be). Dorman’s involvement in the Lim and Dixon project in the posted link. Not generalizing. It’s why I brought up specific names in the first place.“

Given that Jed Alexander didn’t know Dave Dorman personally, it’s more than likely he doesn’t know who Timothy Lim is either. He’d probably bite his own tongue if he found out that Timothy Lim is an Asian American of Chinese and Filipino descent.

And a basic Google search on Vox Day who Chuck Dixon is collaborating with for Arkhaven Comics’ Avalon project had this to say on the subject:

“The answer isn’t white supremacy because white supremacy simply isn’t true. Whites are not superior, but whites are the only tribe willing and able to maintain Western civilization because they are the only tribe that truly values it. The answer for those who support Western civilization, regardless of sex, color, or religion, is to embrace white tribalism, white separatism, and especially white Christian masculine rule.”

Now, you can interpret that as you may, but it’s pretty clear when he says “whites are not superior.” That pretty much debunks the whole idea of Chuck Dixon being a white supremacist because of his business dealings with Vox Day.

As for Ethan Van Sciver, he’s faced these accusations from the likes of Tim Doyle and Kieran Shiach before and has promptly denied them.

“There are strange people on twitter who are pretending to believe that I am a ‘white supremacist’ or a ‘Nazi’ because I’m a rare thing in comics: a Republican. It’s intolerable. It’s ridiculous to have to even declare that I’m none of these things.

To me, white supremacists are villains from movies. They aren’t me, they aren’t my family, and I deeply resent these calculated efforts to make me feel unwelcome in the industry that I’ve given my life to, and by the way, which has profited greatly from my work. This industry isn’t them or me. It’s us.”

Jed Alexander’s baseless accusations show just how much of this nasty poison from Tim Doyle, Kieran Shiach, and Asher Elbein has infected the comic book industry. You have children’s book authors calling people white supremacists without any evidence. He literally thought a variant cover of President Obama looking like a badass was an example of Dave Dorman being a “white supremacist.” It’s just absurd.

This is truly sickening behavior and we will continue to expose and shine a light on it.