For the first time in a decade The Incredibles are the talk of the summer! Well.. them and dinosaurs. Oh, and Infinity Stones. OK, well, let’s just say that The Incredibles are A talk of the summer. The new movie made a bundle of money and the reviews from both audiences and critics are overwhelmingly positive. It just makes sense that a comic publisher would jump into the ring with an adaptation and Dark Horse Comics has done just that with their first issue, Incredibles 2: Crisis in Mid-Life! & Other Stories Part One! I know… long title.

The first issue itself is not one story, but rather three short stories in one: Crisis in Mid Life! Part One, Bedtime Story Part One, and A Relaxing Day at the Park. They are all three short and move very quickly, which is probably to the advantage of the book considering this title’s obvious age demographic. All three are, for the most part, Mr. Incredible-centric and revolve around his ability (or lack thereof) to sufficiently care for his three kids which seems appropriate considering the theme of the most recent Incredibles movie. 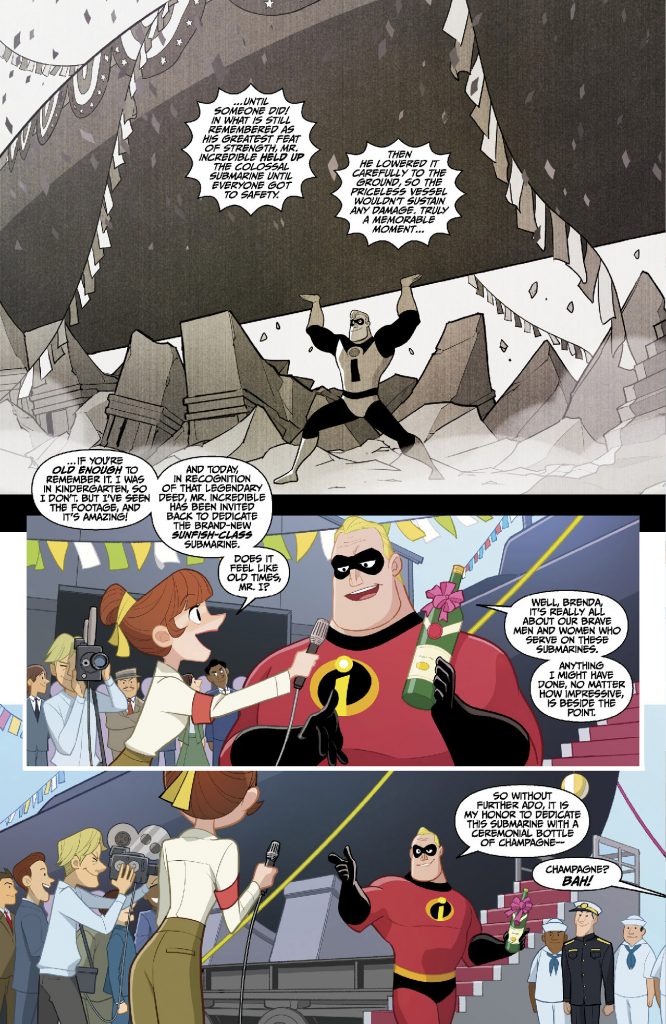 Crisis in Mid-Life is the most substantial of the trilogy of stories as it tells a larger scale story and includes cameos from other well known characters and is better poised to tell a longer story. It focuses around Mr. Incredible’s inability to replicate a heroic act that he performed in his younger days and segues into a personal story that deals with him coping with his ever increasing age and the truth that we all face in that we will all grow old and lose abilities that we once had. In a surprisingly sweet turn, Mr. Incredible take his mid-life crisis as an opportunity to impart needed knowledge and structure to his kids as he instructs them how to be better people and superheroes.

Bedtime Story is a fun first half of a story that sees Mr. Incredible attempting to read a bedtime story to Jak-Jak. Story time ends up being a chance for dad to tell Jak-Jak about some of his early exploits as a young hero. His stories are called into question by Dash and Violet and we’re left on a cliffhanger as he prepares to tell them an even more fantastic version of his story. Part one ends before his story starts, but I’m genuinely interested in seeing what he has to tell his kids. Seems like it could be the opportunity for some over-exaggerated comedic elements.

A Relaxing Day at the Park is the one self-contained story in the issue and is also the least substantial of them all. It’s harmless, fluffy fun, but it’s little more than a mild diversion and a chance to show off some of Jak-Jak’s entertaining powers, his spunky attitude, and, once again, Mr. Incredible’s inability to properly supervise him. It’s fun stuff, but it’s so short and nothing of any relevance happens at all, so it’s actually a bit of a downer to leave off on. 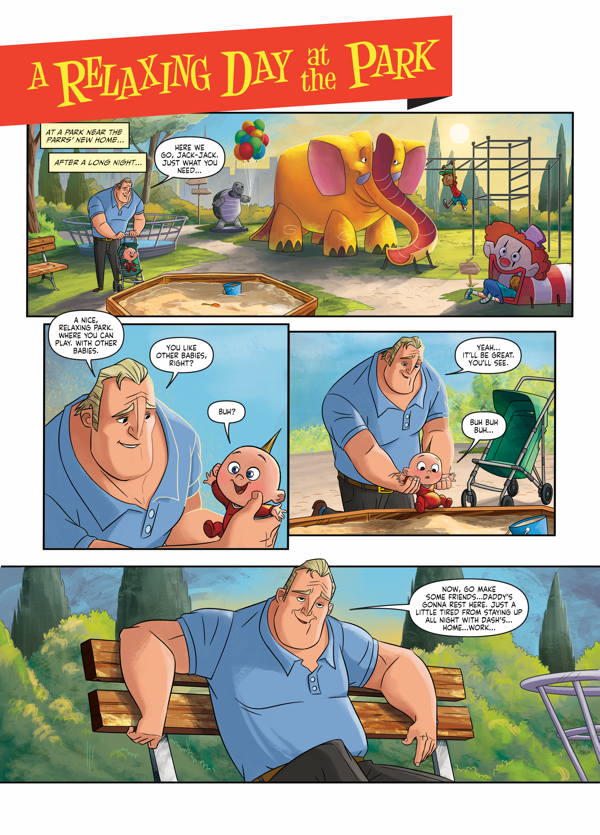 All three stories have different artists and they each bring something different and distinct to each of their tales. The first story is, in my opinion, the prettiest. It’s illustrated by Gurihiru and is as beautiful as you’d expect from that artist. The panels seems to jump right off of the movie screen. Artist J Bone is on duty for the second story and while it’s not as professional looking as the first, it’s charming and hearkens back to classic comic book art. Last is Andrea Greppi who finishes the book on a high note with panels worthy of Pixar themselves.

The Incredibles probably has at least as many adult fans as it does kid fans by now. With that being said, I wish there was something just a tad weightier or more substantial here. I would have preferred the book as one continuous story as the characters and universe are certainly strong enough to warrant it. As it is though, Incredibles 2 #1 is breezy fun that requires very little thought or commitment to enjoy the stories that it’s telling. It’s obviously crafted with a younger audience in mind and to that end, it succeeds admirably.