Thanos creator Jim Starlin, who recently severed ties with Marvel Comics over a dispute with Marvel Comics’ Senior Vice President of Publishing and Executive Tom Brevoort, took to the defense of James Gunn in a recent Facebook post.

Starlin would write on his public facing Facebook fan page:

“After giving it a couple days to think over this James Gunn/Disney controversy, I’ve come to the conclusion that the Mouse got played. Yes, Gunn’s decade-old tweets were distasteful and stupid, but clearly meant to be foolishly provocative rather than taken as advocacy. The whole uproar over them was plainly ginned up by two Breitbart hatchet men, John Nolte and Mike Cernovich, in response to Rosanne Barr’s firing for her repeated hate-filled and racist tweets. I have to agree with Dave Bautisa on this one. Disney accepted a ridiculous apple and oranges argument and made one hell of a bad call.”

Dave Bautista initially responded to Gunn’s firing by saying he was “NOT ok with what’s happening to him.” But he did say he would have more to say.

On Sunday he would elaborate.

What will you do when the #cybernazis attack you? Who will stand by you? Who will cowardly distance themselves from you? Who will punish you for horrible JOKES in the past instead of defending you for INSPIRING millions? MILLIONS!!! #Redemption #injustice @JamesGunn

What happened here is so much bigger then G3, @JamesGunn ,myself,@Disney etc. This was a #cybernazi attack that succeeded. Unless we start to unite together against this crap, whether people are offended are not! …it’s going to get much worse. And it can happen to anyone https://t.co/AMZEd0tfqb

Gunn was fired from Guardians of the Galaxy Vol.3, Marvel Studios, and Disney after he faced serious allegations of “promoting child rape” after a number of rather sickening Tweets were uncovered by Mike Cernovich, Jack Posobiec, and others. But the Tweets weren’t the only things they uncovered. There were a number of blog posts on his website that might have been worse than a number of his Tweets. In fact the popular entertainment website Crazy Days and Nights hints that Gunn might have actually been in possession of child pornography. Granted they don’t name any names, but the description they give appears to be of Gunn. And the site has been proven a valid source on a number of celebrity scandals.

“The offensive attitudes and statements discovered on James’ Twitter feed are indefensible and inconsistent with our studio’s values, and we have severed our business relationship with him.”

What’s even worse is that Bautista appears to have taken a play out of the playbook of radical comic book professionals by attacking those who exposed Gunn’s sickening Tweets. Bautista clearly labels those who find Gunn’s Tweets repulsive and disturbing as “#Cybernazis.” This is the same tactic we’ve seen Tim Doyle and Kieran Shiach use in an attempt to get Ethan Van Sciver fired. They’ve also used it to try and silence Diversity & Comics and trivialize his critiques of the comic book industry. They would label them “Nazis” and “white supremacist” in the hopes that the sickening label would stick despite evidence to the contrary. Those attacks have backfired as Van Sciver left DC Comics on his own accord and launched an IndieGoGo project for Cyberfrog: Bloodhoney which has raised over $450 thousand dollars. Diversity & Comics has launched two IndieGoGo campaigns. The first for Jawbreakers – Lost Souls made over $366 thousand, and the second Iron Sights has made over $61 thousand.

Gunn’s tweets are sickening and Disney explained rather clearly why he was fired. That type of behavior is inconsistent with their values.

But the accusations stemming from those Tweets is far worse. However, Gunn should still be presumed innocent until proven guilty.

But as Gunn himself stated when Roseanne was fired by Disney:

“Roseanne is allowed to say whatever she wants. It doesn’t mean @ABCNetwork needs to continue funding her TV show if her words are considered abhorrent.” 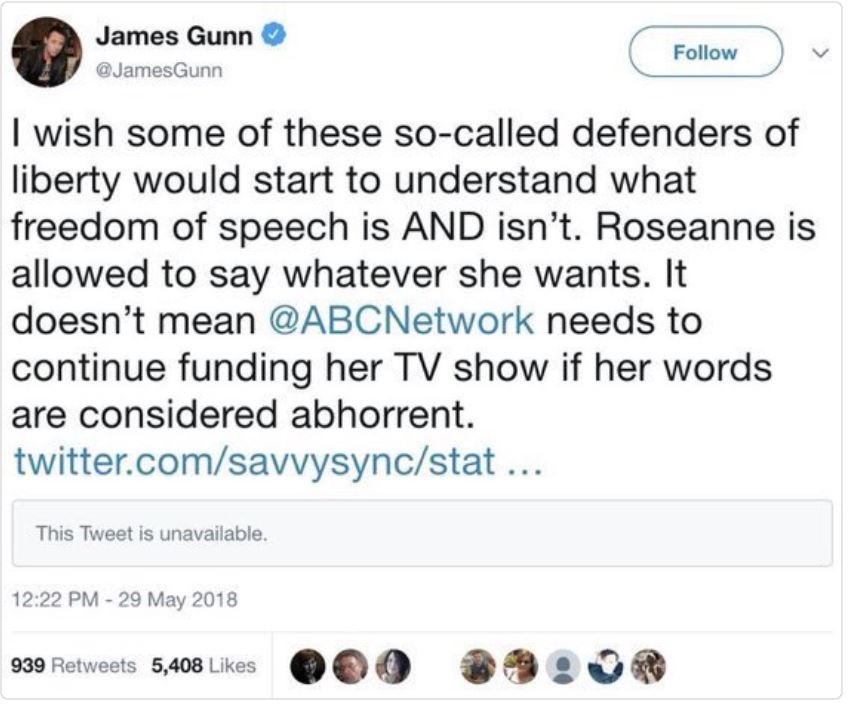 Disney appears to be consistent in their policy. Will Jim Starlin and Dave Bautista begin defending Roseanne Barr moving forward?