“I understand. You think your will is stronger than the ugliness inside.”

Scott Snyder is on a roll. One of the biggest blockbuster names in comics has delivered yet another fascinating and astounding issue of Justice League. The story continues down a rabbit hole of beautiful art and faithful DC storytelling. The Legion of Doom have begun to reveal their master plan. Finally, Lex Luthor is the villain he was always meant to be: creating horrifyingly awesome traps for DC’s greatest heroes. It can be hard to watch your heroes go through the difficult trials and tribulations that take place in Justice League #4. Scott Snyder isn’t giving any of his characters a break after throwing them through the ringer in Dark Nights: Metal.

Artist Jorge Jimenez is on a roll himself. Every single issue he illustrates delights the eyes in every possible way. With an intimidating talent for iconic imagery, it should come as no surprise that he has created the most beautiful issue of Snyder’s Justice League. Not a single bit of space is wasted, with the colors of Alejandro Sanchez making Jimenez’s work even more alluring.

Though the world is in a dire situation, the future of DC couldn’t look more bright under the writing of Scott Snyder.

One of Scott Snyder’s talents is on full display in Justice League #4. As the Justice League fight a multi-front battle, many characters often get ignored. That’s never the case in a Scott Snyder comic. From Superman to Hawkgirl, from the Flash to Aquaman, every hero is here and well-utilized. Some characters might just get a line or two, but it does wonders to make this feel like a real Justice League team-up.

Superman and Martian Manhunter fight a massive space battle inside the totality. Batman leads a small crew on a ship within Martian Manhunter. It’s ridiculous, insane, and simply fantastic. 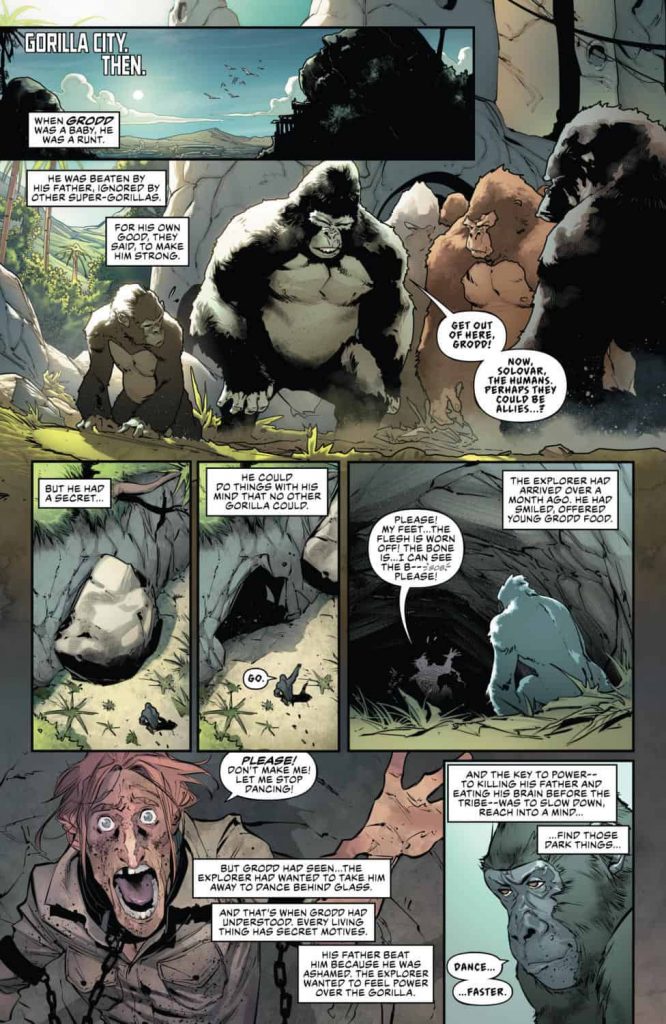 There isn’t really a central character in Justice League #4. Of course, this being a team book, that’s kind of the point. However, the single most important figure in the comic is none other than Lex Luthor. While his true motivations are unclear, this entire issue is dedicated to his master plan. Scott Snyder doesn’t make your root for the bad guy, but Luthor’s master-mayhem makes for an amazing read. Every single one of our heroes is tested, sometimes by having to face their greatest villains.

Flash speeds towards an overpowered Gorilla Grodd; Superman is manipulated by his worst enemy. Some of the story arcs can get a little confusing. In particular, John Stewart’s “battle” with Sinestro is odd, but will likely build to some important story detail. While some of the pages can raise some eyebrows, they do little to deter from the amazing story of Justice League #4.

“What the hell did you see in there?”

Batman, Superman, Lex Luthor and Wonder Woman all have plenty to do in Justice League #4. But it’s artist Jorge Jimenez that’s the star of the show. For the last couple of years, he’s been delivering some of the most beautiful and remarkably consistent work in comic book history. He keeps getting better and better. Justice League #4 somehow outdoes the work of previous series artists Francis Manapul and Jim Cheung. 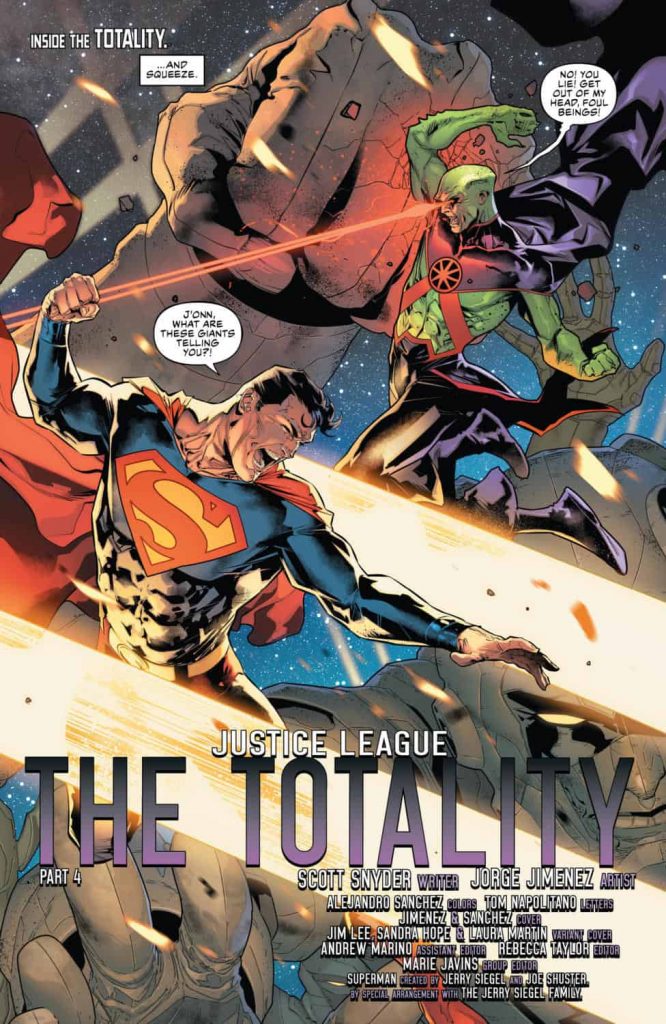 Jimenez’s latest work is one of the most breathtaking interpretations of the Justice League ever. Your favorite heroes have never looked more proud and powerful; your most hated villains have never looked more menacing and vicious. Alejandro Sanchez provides amazing colors, giving a celestial and cosmic touch to the already splendid illustrations. In just two issues, Jimenez and Snyder have become one of the best creative teams working today. Let’s hope they can continue to make much more magic together.

Writing a Justice League comic is no easy task. Every character needs to be represented. There needs to be an interesting plot. Hopefully, some interesting villains show up. Making each of those elements unique is one of the biggest challenges in writing team books. Somehow, Scott Snyder excels at every single one of them. Where most writers falter, he proves himself to be one of the best of all time. With Justice League #4, Scott Snyder has already solidified the significance of his latest series.

Every hero and villain get plenty of “screen time.” Although the heroes are at the forefront of the story, it’s really Lex Luthor who’s pulling all the strings. His master plan is unfolding in the most damaging ways imaginable: wreaking havoc across the universe, from within Superman’s own body. A devious plan that only Luthor, and writer Scott Snyder, could conjure up. Justice League #4 continues a series that feels like it’s been years in the making. Yes, Snyder has probably planted seeds for his Justice League run in previous work. But the “years in the making” refers to the mastery of comic writing that Scott Snyder has developed.

A skill that helps Jorge Jimenez create some of the most beautiful DC illustrations in recent memory. The insanely intricate display of detail and action will keep readers lingering on every single page. There’s no such thing as wasted space in a Jorge Jimenez comic, because every bit of detail is worthy of the reader’s attention. Justice League #4 has a few too many storylines, but they’re all leading in an amazing direction.

Scott Snyder obviously has an amazing plan for the DC Universe, and every fan should be reading.