A multitude of celebrities, directors, and others in the entertainment world have come to the defense of James Gunn. To them, his firing from the next Guardians of the Galaxy movie is nothing more than a cyber lynch mob gone wrong. And people should “evolve.”

In a now-deleted Tweet, Blair asked: “Marvel: RE-HIRE JAMES GUNN – Sign the Petition! https://chn.ge/2JIuUrB via @Change. Because if people are punished despite changing, then what does that teach people about owning mistakes and evolving? This man is one of the good ones.(sic)” The petition Blair linked to currently has over 300,000 signatures as of this writing.

Gunn was fired after a number of sickening Tweets were brought to light involving pedophilia, child rape, and molestation.

While Blair might have deleted her Tweet advocating for James Gunn to be rehired, she would still Tweet support for the director and even post an article claiming Gunn is not Roseanne and Disney should know it.

In a moment of irony, Gunn had actually Tweeted support for Disney and ABC’s decision for firing Roseanne. It seems life comes at you pretty fast because the director found himself in a very similar situation because of his use of the platform: 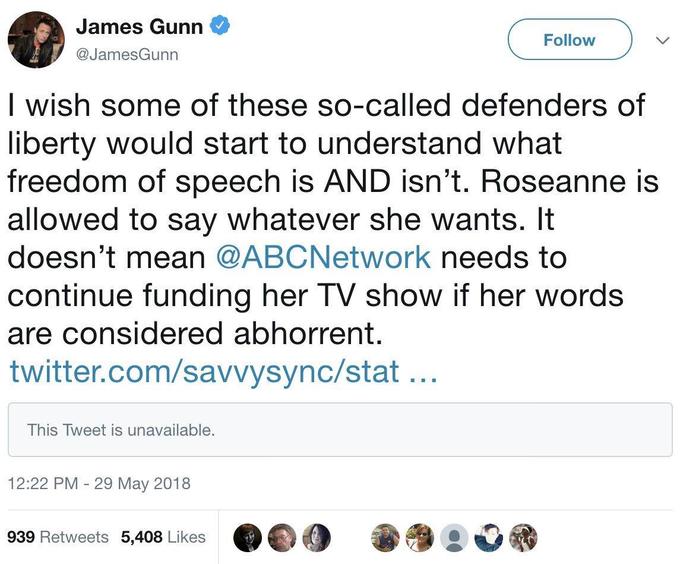 Selma Blair continued in a following tweet where she shared an article criticizing Mike Cernovich and painting him solely as a troll.

This is why we can’t have nice things. #JamesGunn being one of them. This is what will push a nobody like me off of Twitter. https://t.co/7Zorjmnh2Y

Just yesterday she posted a link to a YouTube asking, “Could Disney ever have the werewithal to reverse a decision made so rapidly?” She would add, “Whatever the case #IStandWithJamesGunn and those who have changed for the better.”

James Gunn & Guardians of the Galaxy 3: What Happens Now? https://t.co/iufDISpBIV via @YouTube. Could Disney ever have the wherewithal to reverse a decision made so rapidly? Whatever the case #IStandWithJamesGunn and those who have changed for the better

In another moment of irony, Selma Blair has accused director James Toback of threatening to kill her after an alleged sexual harassment encounter that took place in 1999.

In an interview with Vanity Fair, Blair described her first encounter with Toback was a meeting in his hotel room where she was auditioning for a role as a lawyer in a project called Harvard Man. Blair claims that Toback asked her to perform the lines naked. She then describes a sexual encounter with the director. After the encounter the director allegedly threatens to kill her if she spoke about the encounter by kidnapping her and then tying cement blocks to her feet and throwing her in the Hudson River.

Toback responded to Blair and fellow actress Rachel McAdams’ allegations by telling the LA Times, “I have nothing to say about anything.”

He had previously been accused by 38 other women and had denied the accusations to the LA Times. He said he had never met any of the women and that if he had met them it “was for five minutes and have no recollection.” He also told them that it has been “biologically impossible” for him to engage in the behavior they accused him of for the past 22 years. He pointed to diabetes and a heart condition that require medication.

Over 200 women have accused Toback of sexual harassment to this date. However, the director is not under investigation for sex crimes in Los Angeles and he won’t be prosecuted for the multiple allegations of sexual misconduct against him. People reports that, “The D.A.’s Hollywood sex crimes task force investigated  five allegations against Toback, but found that they all fell outside the statute of limitations.”

This schizophrenic approach to dealing with misconduct has left many fans, and people scratching their heads. It seems that celebrity standards are at least very inconsistent. Though some argue that Gunn’s Tweets were a decade old, others point to his close friendship with Huston Huddleston. Huddleston plead guilty to one count of possessing child pornography. Huddleston was sentenced to time served and three years probation. He will also have to register as a sex offender beginning in September 2018. Huddleston also faced other charges including contacting a minor with intent to commit a felony, and attempting to hire, employ, use, persuade, or coerce a minor to participate in the production of child pornagraphy. Those charges were dismissed.

What do you make of Selma Blair’s push to get Disney to rehire James Gunn? Do you think Gunn should be rehired?