The Root, The Mary Sue, i09, and others are all claiming that Anna Diop disabled her Instagram comments because of racism following the trailer for DC Universe’s Titans which premiered at San Diego Comic-Con.

The Mary Sue’s headline blares, “It’s Disgusting That Racist Comic Book Fans Ruined Social Media for Yet Another Black Actress.” The Root’s, while factually inaccurate is similar, reading, “Racist Comic Fans Run Titans Star Off Instagram for Not Being the Right Kind of Black.” And I09 claims, “Sorry Racist Nerds, But Starfire Is a Black Woman.”

All three of these websites use for their source of evidence a Tweet from badposttitans claiming that Anna Diop disabled her Instagram comments due to “disgusting racist attacks.” However, this Tweet is patently false. Diop did disable a number of posts, preventing her fans from commenting. However, there are still posts including her most recent one which still allows fans to post. Her most recent Instagram post is from six days ago, which was well before all of these articles were written.

Beyond words and beyond excited! 🖤 #Us

The Root makes the wild accusation that Anna Diop “is catching racist hell for not being the right kind of black for the role.” Jason Johnson claims that “Starfire [is] one of the core characters of the Teen Titans franchise, a character who also happens to black.” This same argument would be made by Charles Pulliam-Moore on i09 as seen by his headline.

This is simply not true. Starfire is not a black character. In fact, Pulliam-Moore even admits it in his own article, “She’s an orange, alien princess from a comic book who flies through the sky and shoots bolts of energy from her hands.” Johnson would call his own lie out as well when he describes Starfire, “Starfire is a golden-skinned (literally), full lipped, curly-haired, super-powered princess.” So both Pulliam-Moore and Johnson effectively call out their own lies in their own articles. You can’t really make this up.

Despite their lie, the other part of their argument is completely moot. The majority of the criticism of Diop’s Starfire, isn’t about her, it’s about her absolutely horrible costume design the DC Universe employed for the show. And it’s not just the Starfire costume facing this criticism. It’s Beast Boy and Raven as well.

Just doing a simple search on Twitter for Starfire costume comes up with these responses:

Here’s a black girl cosplaying as starfire. Obviously this is not a movie or TV quality costume, but it does demonstrate that a black person can capture the look of Starfire and not look like a crazed street hooker. pic.twitter.com/uxSraiQbKe

Spot the costume differences…. why my girl who who is a Princess looking like she is not living her best self/life. Let’s also spot the emotional difference while we’re at it. She’s fierce. Are we at least going to see that? #Starfire pic.twitter.com/6sXomuWpK9

Fam, who did this to this beautiful actress? Styling&costume-design is not ur calling. Who employed you? Find another way to put food on your table. #starfire #titans

How amazing cud this girl have looked with the right attention to detail? Look at the deviant art mockups tho. pic.twitter.com/MWneeoMHsl

Honestly I love her for starfire but it looks like the studio gave them $15 at a thrift store for their costumes and I’m disappointed pic.twitter.com/mQ5x8nQNEG

Now that we saw the horrible costumes for star fire, raven and beast boy. I can’t wait to see how shitty the costumes for the doom patrol will look like.

People are awful. I honestly think the whole show needs be thrown away. I think it’s bad casting all around and I haven’t even seen an episode. The costumes are shit, the dialog sucks, the wigs are shit and again they have whole ass adults playing young roles. All except Raven

And here’s graphic designer Boss Logic’s take on Diop as Starfire from August of last year before we even got a look at the design.

Here’s a sampling of some of the reactions from his take:

As Starfire would said, she looks the awesome

If she gets anything close to this, it’s going to look amazing.

This looks so cool! The hype is real.. good job! ?

As you can see, the criticism is about the costume designs, not the actors and actresses.

However, that wouldn’t stop Johnson from taking it one step further and pointing out that he thinks the criticism is about Diop’s dark skin tone, “She’s not the right kind of black woman.” He adds, “In other words, Anna Diop is too ‘black’ and ‘too dark’ to play an alien black woman who’s supposed to be beautiful.” This is just absurd especially given the success of black superheroes and characters over the years. Blade is one of the most beloved superhero films and it stars Wesley Snipes. No one is complaining about Blade’s outfits because they look like the comic books! Here’s a cover from 1998 when the film came out. 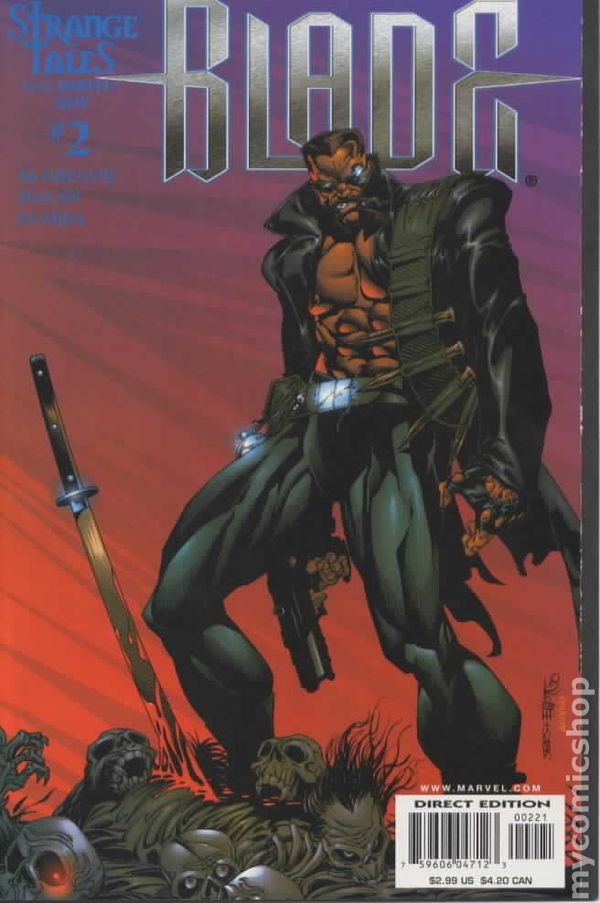 Luke Cage on Netflix was seen by 3.52 million people when it premiered. The show has a 77% audience rating from Rotten Tomatoes. Mike Colter and Luke Cage aren’t seeing this criticism because his outfits match the comic books and don’t look absolutely horrible.

Black Panther just smashed the box office, raking in over $1.3 billion dollars. The outfits look great and the characters match up to the best of their abilities to the character from the comics.

But we have an even more recent example from DC Comics with Aquaman showing off Black Manta. People are absolutely digging the outfit.

They actually made Black Manta look awesome in live-action. pic.twitter.com/j0xhUNwoOZ

Every shot of Atlantis, Aquaman, Mera, Black Manta, Orm — All of it was so beautiful!!!

Black Manta has the best CBM costume and that’s a fact. #Aquaman pic.twitter.com/rmiN1yaLnD

But if that still doesn’t convince you that the criticism is about the actual costume design, let’s look at the most recent reveal of the new animated She-Ra design. Tons of people criticized it based on the design alone because they thought it was ugly. Did the criticism of She-Ra have to do with race? No.

As Richard C. Meyer points out in his Jim Jefferies spot, The Root, The Mary Sue, and i09 are using the same tactic that DC Comics, Marvel Comics, and a number of their creators and staff have used. They are using race as a shield to deflect the real criticism of the actual costume design.

The Starfire design is ugly and looks nothing like either the animated Teen Titans television or anything from the comic books. That’s a fact.

What do you think of the Starfire design and the reactions calling the criticism of the costume, “racist?”