According to a number of folks, especially those on the left side of the political spectrum here in the United States, racism never died, it only evolved. I wish that I could say that they’re lying and are in fact only using it as a political cudgel. But believe it or not, it’s the truth. The problem is, it’s not coming from where they think its coming from.

In a tweet, this morning Black [AF] writer Kwanza Osajyefo took on non-white ComicsGate supporters, and in essence, called them Uncle Toms. In his thread, he highlighted where he believes racism is truly residing in our society.

I mean, ComicsHate is so racist they keep creating fake accounts overstating a label to make their digital circle-jerk seem open and diverse. This profile is basically, “what a white nationalist thinks black Twitter is” pic.twitter.com/VeNKfCZGSP

I’m not surprised that meme-tick Exhibit NAz1 thinks it can fool anyone but ComicsHate dummies into thinking he’s black — or a real account. pic.twitter.com/3RWaqtujkN

These type of accounts are such giant red flags ? that show ComicsHate knows it’s discriminatory so it makes fake “minority” accounts to bolster a paper-thin inclusivity narrative. I know there are outliers who stan for it — but we know that type… pic.twitter.com/7JwAL2pZ8B

ComicsHate isn’t a conservative thing. It rallies around juggaloes — pause! I can’t insult juggloes — around sexist bigots. I don’t subscribe to “race traitor,” I’m not a tribalist. But POC who stan for ComicsHate align with blatantly racist rhetoric — so take it how you want. pic.twitter.com/sDnJuFzDTz

Thankfully many users saw through this disgusting remark for what it is.

I’m getting sick of people like you calling all the minorities that aren’ t in step with your agenda fake minorities.

this isnt much different than the whole russian bots thing

Diversity & Comics weighed in and described Kwanza’s tweet as “Ugliness of Spirit.”

Thanks to that spotlight on Kwanza’s tweet. Minority ComicsGate supporters also decided to take to Twitter in order to call out Kwanza’s disgusting and ignorant tweet for what it was:

Calling me an uncle Tom huh. Uncle Ruckus would have been funnier. What’s ironic is that he still doesn’t get that hes still getting played by white feminists who are at the top of the oppression power pyramid. One false step with Becky and you are D.O.N.E. black man.

Kwanzer: “I am going to erase the identities of minorities, or call them race traitors because they don’t agree with me.” When you are desperate to piece together a narrative. These people are trash.

We reached out to ComicsGate supporter Spike Valentine. he also happens to be a New York Times Bestselling comics writer and scriptwriter. And he created the Spider-Man character, Aracnido Jr. Here’s his take on Kwanza’s accusations:

Racist people act in a couple of ways; they treat different people like pests or their pets. Kwanzer, Antos, Busiek… ideologues are quick to pretend they speak on behalf of gay/trans folks, “people of color,” and women to pander to their own narcissist messiah complex and put down their “enemies.”

But the second they are confronted by the global diversity of people supporting #ComicsGate they will not address it and try to imply you are fake or brainwashed. Proving they see diversity as both pets and pests. Proving everyone what real racism looks like.

We are not a “people of color” monolith, we are not damn Power Rangers, we are an amorphous mass of individuals, just like the comics consumers. We only speak on our own personal behalf and these people should too.

Timothy Lim. the creator of Thump, My Hero Magademia, and Trump’s Space Force also responded to Kwanza’s accusations in the form of a photo. 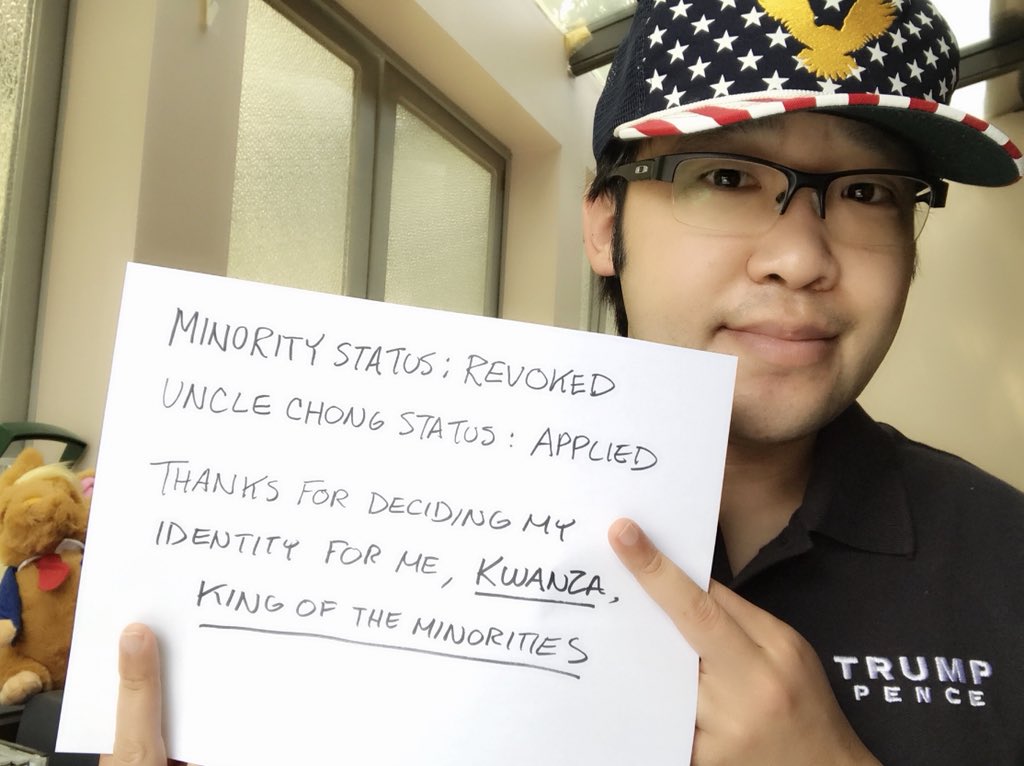 This isn’t an isolated instance outside the comic book world. There have been cases of non-white conservative, libertarian, and even centrists being labeled Uncle Toms simply for not sharing a twisted form of group think. One of the greatest examples is Larry Elder who is an unashamed Republican. He has been called Uncle Tom or worse many times simply for thinking outside of how certain people think he should think.

Elder isn’t alone in experiencing this. Great thinkers such as economists Thomas Sowell and Walter Williams have also felt these attacks for not kissing the ring of conformity. I myself have experienced this form of racism, professionally, as a former communications director for a gun rights group. I experienced first hand both white and non-white lawmakers call me and my colleagues Uncle Toms for not bowing to their ideology.

So what do you think? Did Kwanza Osajyefo go too far in his broad painting of minority ComicsGate supporters? And are you disturbed by this trend of racism from a number of comic book pros?