Teen Titans #20 starts off with a bang with the new team smashing into a conflict by disrupting a human sacrifice courtesy of Brother Blood. During the battle we’re introduced to the rest of the team and their recruitment Tarantino-style by Robin, who is leading this new team.

A quick run-down of the team: Kid Flash who will only join if Roundhouse, the human wrecking ball with a popular YouTube channel can be part of the team. Djinn, who has all kinds of crazy magical powers but is scared of something that remains unknown, Red Arrow an ex-assassin and the second in command of the team even if she isn’t aware of the leadership role she plays, and finally Crush. She’s Lobo’s daughter because why not? Crush joined due to Robin knowing things about her nobody else does and his promise to help her with a murder investigation. She also wants to kill her Dad just like a certain clawed father/son relationship that Marvel’s been milking for years. 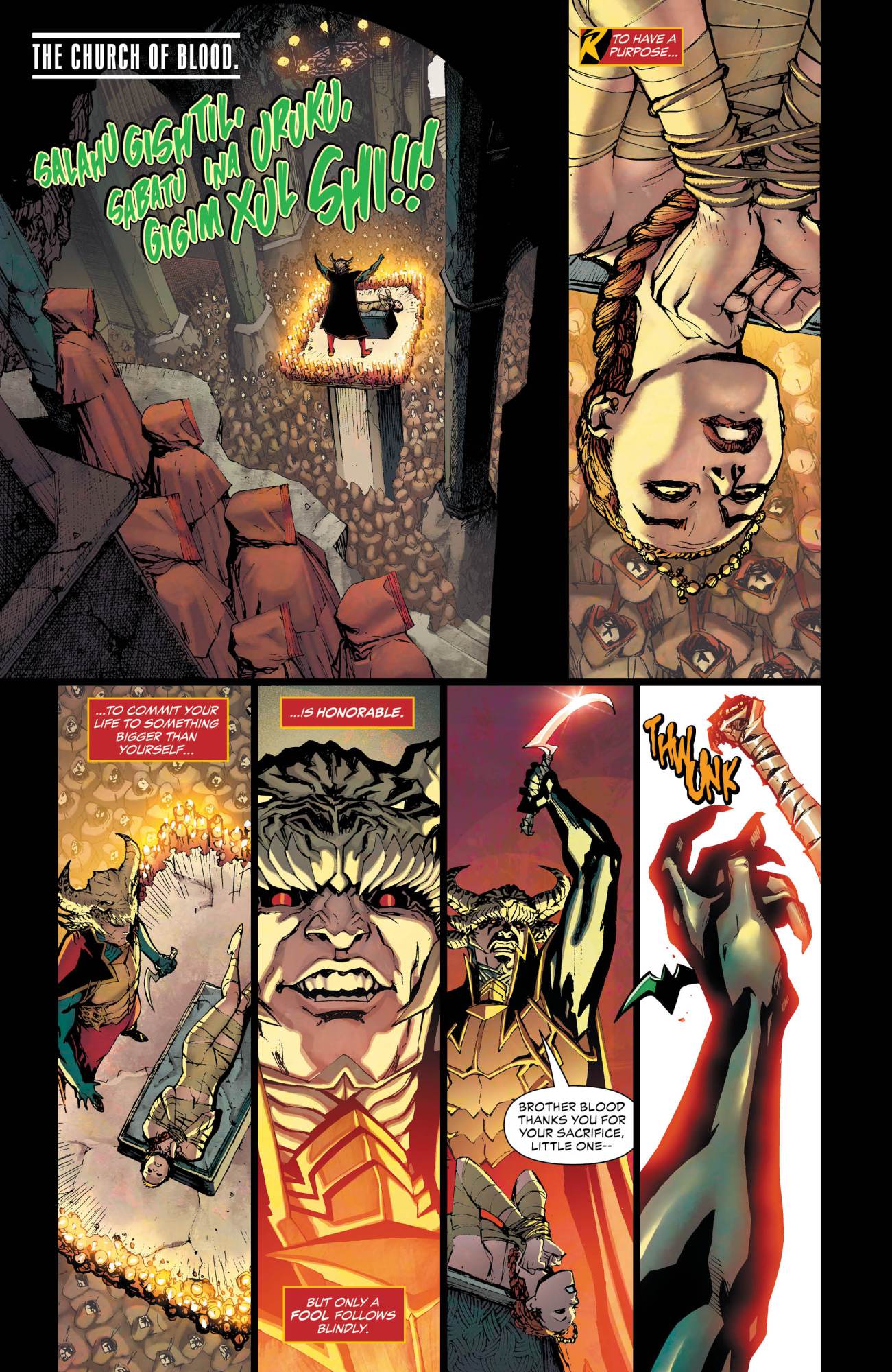 I really didn’t know what to make of the issue before I picked it up because there are so many Teen Titans stories out there. I like Damian and he doesn’t disappoint, being his usual “I know everything so shut up and take orders self.” Emiko Queen seems like a female Damian having a very similar background and she lends herself to a solid supporting character with not much of a sense of humor. Roundhouse was surprisingly likable, he feels like the “Rudy” of the bunch (if you don’t get the reference look it up, you’ll thank me) with Kid Flash and Djinn bringing mild interest and solid strength to the team. Even Crush, who I really wanted to dislike wasn’t used in a way that made me hate her.

If I’m nitpicking, I feel like DC could’ve put a stronger artist on the book, even if only for a few pages. Bernard Chang does an all right job, and it would be unfair for me to say that I didn’t like the art, but if you’re going to push an all new Teen Titans team a big gun should’ve been brought into the fold even if just for a few pages. I really would’ve liked to see Kevin McGuire do a couple of pages, for example, to really bring out the emotional spectrum of the team. Angst-ridden teenagers usually have what parents call “the look” and he would’ve captured it perfectly. The book was also a little more brightly colored for being as grim as it wanted to be. Again, I can’t stress enough that Bernard Chang did a solid job, and I expect him to get better as he gets a feel for the team. 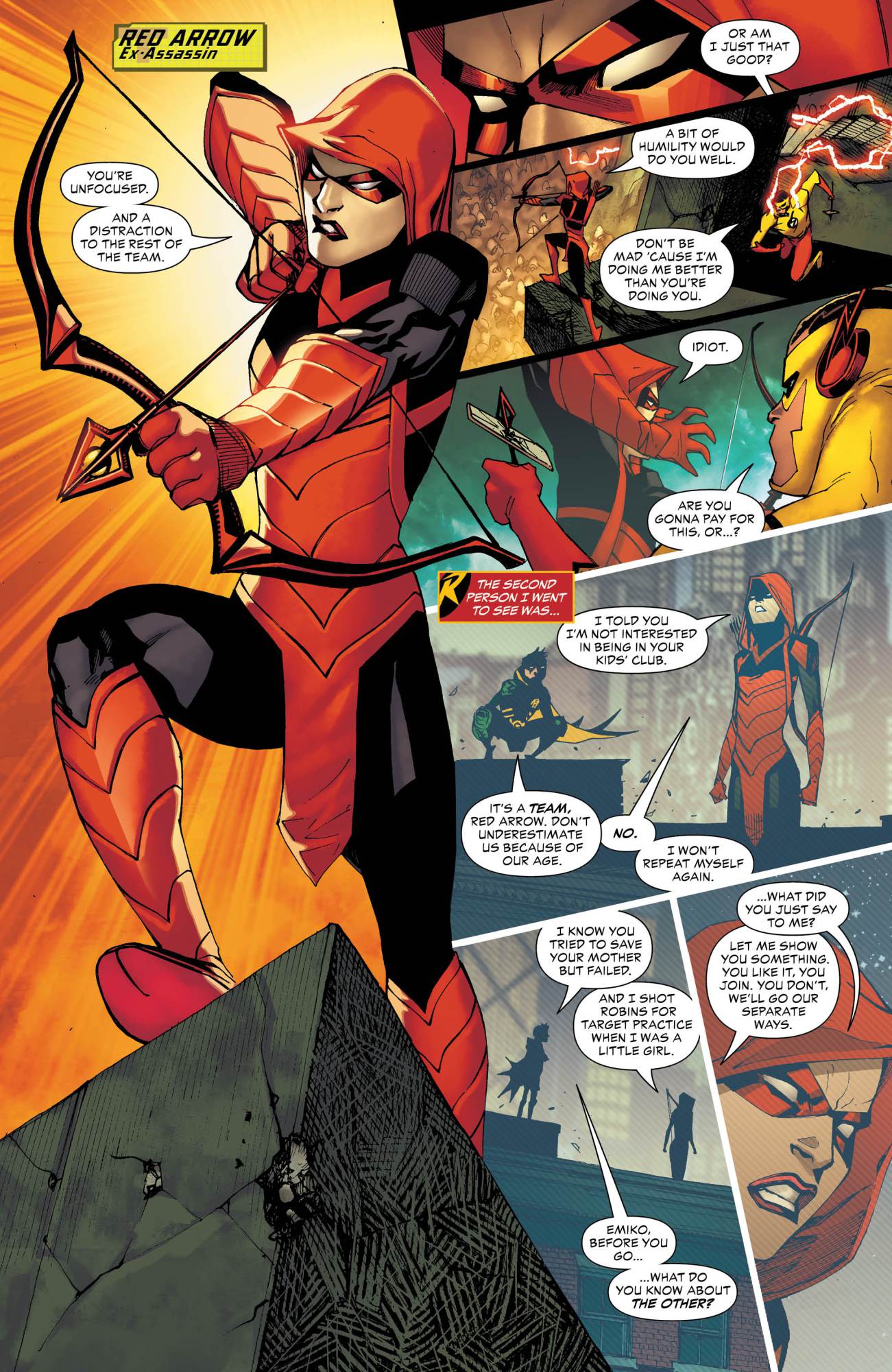 The end of the issue however got me to want the next issue to come out ASAP, while after the fight the Titans are chilling out at their base (a Batman safe house that Damian stole from his dad) and we see the fruits of this team’s labor. I’m not going to give it away but I’ll say this much: if you were a fan of Kevin Smith’s Green Arrow run, you’ll want to read this issue.

I wasn’t sure what I was going to think about this team going in. In press I saw before release, I felt like they were trying to sell me on an X-Force for the DC Universe, but in actuality I found I rather liked the book. The teenage angst that Damian expresses, feels real enough and I’m sure it’ll be sooner rather than later that his father has something to say about what he’s been up to and with whom.