Hard Case Crime, which is a publishing company “dedicated to reviving the vigor and excitement, the suspense and thrills—the sheer entertainment—of the golden age of paperback crime novels, both by bringing back into print the best work of the pulp era and by introducing readers to new work by some of today’s most powerful writers and artists.” Not only do they publish books, but they’ve also teamed up with Titan Comics to publish comic books. They recently decided to not only insult their customers, but actually relished in losing them.

The whole thing started when Hard Case Crimes took to Twitter to call out an unnamed person who had pitched them a book idea.

How not to interact w/ an editor you want to sell a book to: “My book is like Ken Follett and Frederick Forsyth.” “Thanks for thinking of us, but I’m afraid this really doesn’t sound like our sort of book.” CONTINUED IN NEXT TWEET…

CONT.: “You are dismissive of Follett and Forsyth? No wonder I have nothing of interest for you. Who would? Declarations of pride in one’s craft are to be expected, but unwarranted and unproven arrogance is something different…Just look at Trump, if you want a prime example.”

CONT.: “you should grab hold of your ego and throttle it until you get it under control. Until you do, people will talk about you behind your back at cocktail parties. I guarantee it. By the way, my attitude towards you is the same as yours’ towards me. We can both fuck off.”

Hard Case Crime does admit the quotes they use aren’t actual quotes, but merely paraphrasing the submitter’s response to a “No.”

In fairness, I paraphrased due to Twitter’s character limits. He just described his books as similar in genre, not quality. But still.

Excellent point. Dodged a bullet there. (Maybe literally — he described himself as ex-military.)

They also claim that by sharing this response it wouldn’t have a “lasting impact.”

Oh, I don’t want to make too much of it. I mostly thought it was amusing, which is why I shared it. It has no lasting impact, I promise.

One user wasn’t too happy with the way Hard Case Crime was calling out this submitter over social media and let them know about it.

Well to be honest I hadn’t even entertained the concept of attempting to sell you a story and after that I’m fairly certain I won’t. Not that you’re wrong on arrogance but heck guy yours is showing. I’ve bought a fair number of books from you over the years but this threw me

Arrogance? Because we know what genres we publish and what we don’t and are honest about it when someone pitches us a book? How is that arrogance? If someone pitched us a western or a romance we’d say the same thing: sorry, not our thing.

But things would take a turn for the worse for Hard Case Crime when they decided to insult this customer, who told them to take a “chill pill.”

You seem to be lashing out at someone more specific than your tweet indicates. Though I did appreciate you making note of how great president Trump is doing. Regardless take a chill pill dude you’re tarnishing the halo of brass and gun smoke that I always place over your logo

Wasn’t the brightest move. I know, I’m just a little customer. I only pick up two or three of your titles a year so not much weight in my opinion so no worries. Enjoy your life guy.

In fact, after Trump’s name was mentioned Hard Case Crime decided to tell the customer to “go f*** yourself.” 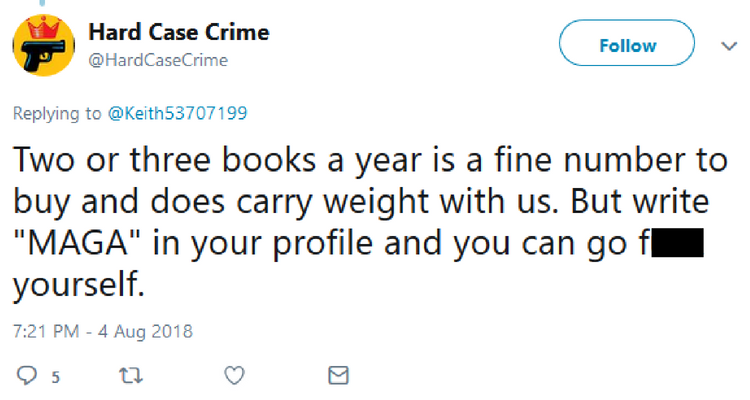 Please do. Couldn’t make me happier.

It would devolve from there. 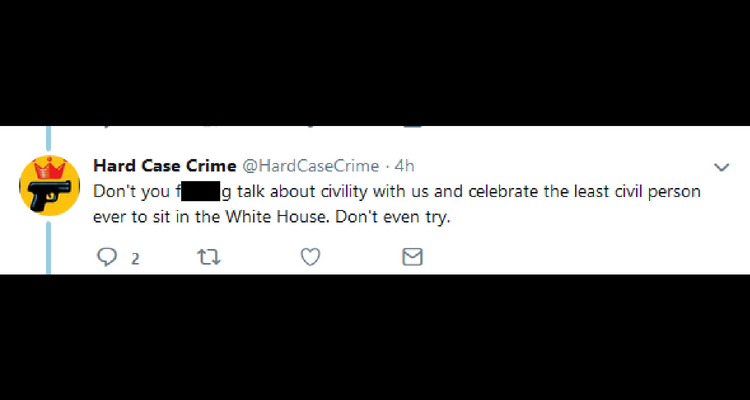 Lol Dude he’s not buying your books, I am. Or was. My choice of politicians had zero to do with my choice of reading materials nor did I contact you about anything remotely related to politics. You’re the one who decided a hashtag in my profile meant more to you than my business.

The customer would respond asking whether they are a book publisher or a political lobbyist.

So I’d say you need to decide if you’re a publisher or political lobbyist. Strangely others found your message to me as off putting as I did. I followed as fan to learn about new projects. I left a disappointed customer. Enjoy your life guy.

Lol Dude he’s not buying your books, I am. Or was. My choice of politicians had zero to do with my choice of reading materials nor did I contact you about anything remotely related to politics. You’re the one who decided a hashtag in my profile meant more to you than my business.

Hard Case wouldn’t respond But they would target another customer. They would relish in telling this other customer to stop buying their products.

The difference is that I’m not trying to sell you something, unlike the fellow who was trying to get me to buy his book. If you actually WANT someone to buy something from you, you’re ill advised to act obnoxiously toward that person. But I don’t want you to buy anything from me.

They would even say they are “delighted” to lose him.

But you see, we ARE delighted to lose you as a customer. If I could lose you twice, I gladly would. I’d lose you once a day for eternity with nothing but pleasure.

This appears to be the first time we’ve actually seen a comic book publisher actively tell their customers to not buy their products. We’ve seen a number of creators do this, but it’s never been an actual publisher before. However, this shouldn’t surprise anyone as major video game companies have told their customers and potential customers to not buy their products.

This definitely appears to be a trend. But Hard Case Crime might have taken it a step further by specifically targeting their customers because of their political beliefs.

What do you make of Hard Case Crime’s response to its customers? Will you continue to purchase their products? Should Titan Comics respond to one of their partners telling their customers not to buy their products?