DC Comics artist Ramon Villalobos, who will be working on Vertigo Comics’ Border Town series has a history of racist Tweets specifically against white people.

Over the last few weeks, Twitter has proven to be both a blessing for creators who enjoy engaging with fans. And a curse for those who use the platform as their workbench of hate. Ramon Villalobos, who worked with racist Gabby Rivera on Marvel’s America has a long track record of using Twitter to spill out racist comments, misrepresentation, and just strange stuff.

Ramon recently Tweeted that he wanted to “put white people in FEMA camps.”

Lol. I one time tweeted we should put white people in FEMA camps. No disrespect to white people but that tweet still applies. pic.twitter.com/MVOiCfsc9y

He would quickly backtrack, but admitted that Twitter had actually removed other “anti white” Tweets.

Haha yeah I got some tweets pulled for being anti white which was funny because they were all jokes that made me laugh. I’m at starbucks right now I clearly love white ppl

This isn’t the first instance either. Back in 2017 in Texas a number of Dreamers showed up to a state legislative session to protest SB4, which is described as an Anti-Sanctuary City bill. One of the representatives decided to call ICE on the protestors and Villalobos decided to react with racism. 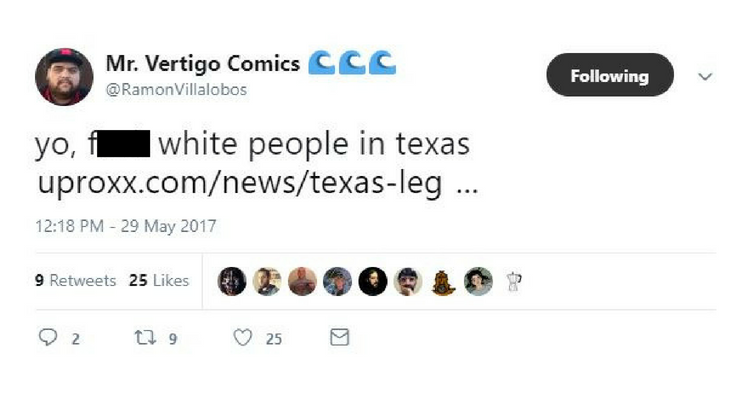 When confronted by someone he appears to personally know he would temper his racism.

You know im excluding you ryan. Im sure some white Texans are good people

donald trump IS a white supremacist

He called the company the “white devil.”

rockstar games is the white devil. people only play those games to disrespect women and reinforce the patriarchy https://t.co/QUYDunJqPU

He then further elaborated on his plan to lock white people up in FEMA camps.

being the invisible majority is a trip. its all good though. when whites are locked up in fema camps theyll regret this. #villalobos2020

Villalobos would even target Jared Leto and claim that his Joker from Suicide Squad is somehow “brownface” because he used “Mexican drug cartel leaders” to help him get into character. However, Leto never said such a thing. In fact, it was the Joker’s design by costume designer Kate Hawley that was inspired by “bespoke Mexican cartel leaders.”

Based on these racist Tweets it definitely appears that Ramon Villalobos is breaking DC Comics’ Social Media Guidelines, which states:

“DC expects that its employees and freelance talent community maintain a high level of professionalism as well as reasonable and respectful behavior when engaging in online activities. … Comments that may be considered defamatory, libelous, discriminatory, harassing, hateful, or that incite violence are unacceptable and may result in civil or criminal action. In addition, comments that may be considered insulting, cruel, rude, crass, and mean spirited are against company policy guidelines. We ask, and expect, that you will help to create an online environment that is inclusive, supportive and safe.”

But Villalobos isn’t the only creator who is attached to Vertigo Comics’ new rebrand who goes out of their way to break the DC Comics Social Media Guidelines. We’ve already seen Zoe Quinn, Rob Sheridan, and Richard Pace do the same.

It seems that DC is good at issuing guidelines but are unable, or more likely, unwilling to enforce them.

Just last week DC Comics Publishers Dan DiDio and Jim Lee had to address the 6.5% decline seen during the ICv2 report. DiDio blamed the declining sales on an “over-saturation of product.”

However, a number of fans disagree. They point to the bad, racist, and toxic behavior of creators like Ramon Villalobos. This behavior has been beyond off-putting and forces people to turn away from the standard industry products.

It just seems that with the behavior of Ramon Villalobos, Zoe Quinn, and others, comic book customers are deciding to spend their money elsewhere.