As a man who lives in a house with six children, three of them being girls, you may be surprised to learn that I have never actually seen Disney’s [easyazon_link identifier=”B00J2PF5FE” locale=”US” tag=”boundingintocomics-20″]Frozen[/easyazon_link]. I know that we own it, and I know that it has been viewed in my house many times because I’ve heard it playing in the background, but I’ve never sat and watched any of it. Because of that, every time some small child has approached me and asked “Do you want to build a snowman?” I have had to politely smile and nod while pretending that they are cute and that I know what they’re talking about. I then usher them out the door so that I can watch more mature things like Scooby-Doo.

Because of that, I was apprehensive about reviewing Dark Horse’s new comic series based on Frozen. I was afraid that my unfamiliarity with the universe may hamper my ability to become invested in the story. I believe, however, that enjoyment of a licensed comic book should be increased by familiarity with the source material, not predicated upon it. To that end, I feel that writer Joe Caramagna has succeeded in crafting a first issue that Frozen novices like me can enjoy on the book’s terms, even if I’m not intimately familiar with every character. 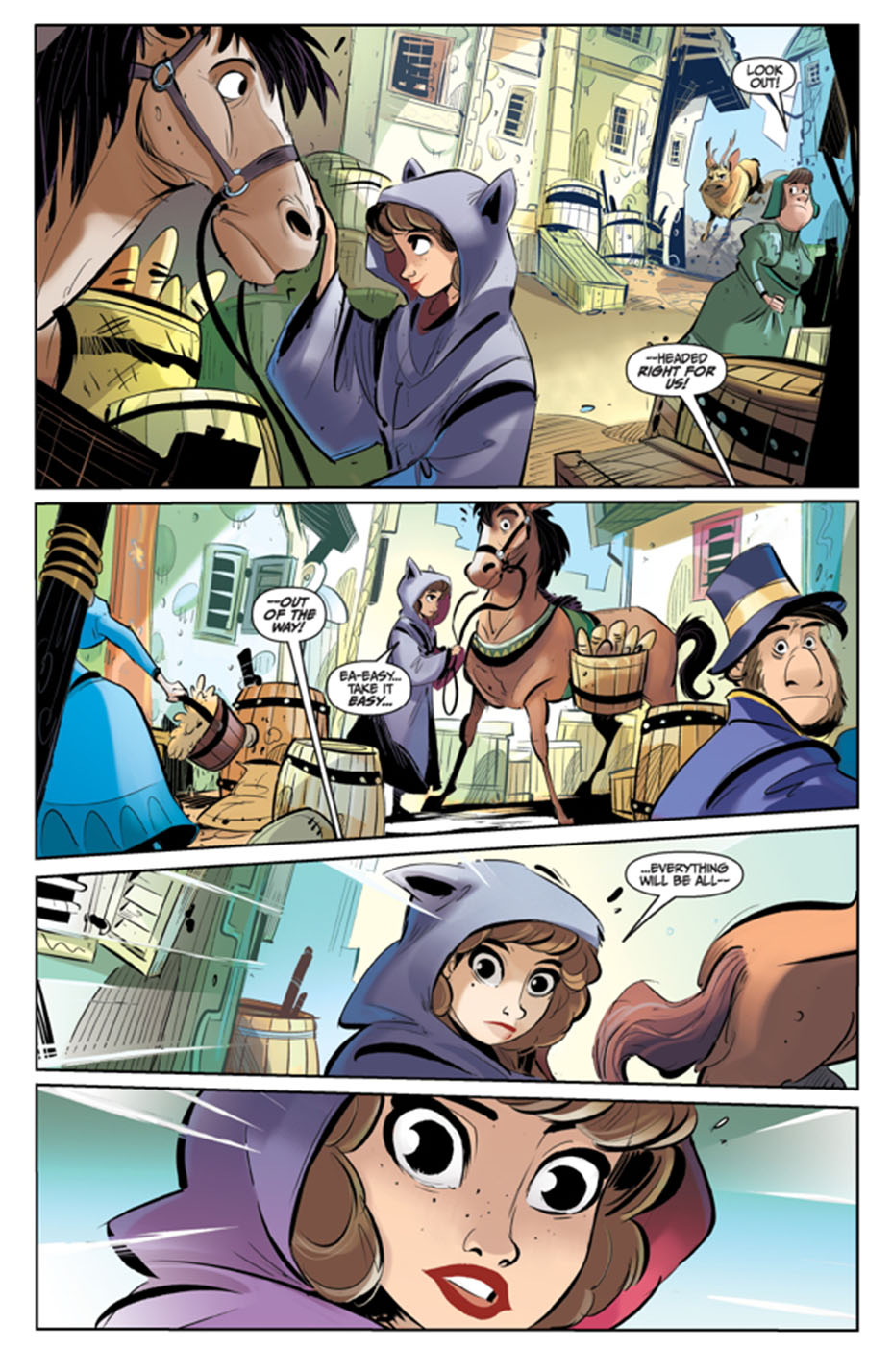 The first thing that will likely jump out at the reader is the stunning artwork. It is wonderfully gorgeous, from the pitch-perfect character models to the highly detailed backgrounds to the beautiful coloring. It’s drawn not so much as a straight adaptation of what you see on the screen, but rather, a whimsical version that would not look out of place in a Little Golden Book, or something like that. It’s warm, inviting, and frankly, nostalgic. If the first issue of [easyazon_link identifier=”1506710514″ locale=”US” tag=”boundingintocomics-20″]Frozen[/easyazon_link] is anything, it’s beautiful.

The story surprised me as it eschewed many of the “kids story” tropes that typically permeate media for children. The cliched narratives that we typically beat over kid’s heads such as “be yourself,” “you’re perfect the way you are,” “It’s wonderful to be different,” “follow your heart,” and things like that are largely absent. I think all of those points are important for kids to learn in some regard, but it seems as if every kids movie, TV show, and story hinges on these same tropes. Joe Carmagna takes a refreshingly different approach and weaves a mysterious tale of kingdom disputes involving encroachment, thievery, and finding your purpose. All these elements woven together may sound like a strange brew for a children’s property, but it’s pulled off admirably and I appreciated the more mature approach.

I do, however, wonder how appealing it may be to kids of all ages. To be sure, Frozen has its share of adult fans, proven by the sickening amount of YouTube videos showcasing grown men and women singing ‘Let It Go,’ (not that that’s a bad thing. Have fun everyone!) but the largest audience for Frozen will always be kids. While I am a huge advocate of not pandering to children and allowing them to experience more mature media when appropriate, I can’t help but feel that some of them may find this first issue a bit boring. Queen Elsa weaves a bit of her ice magic and there’s a couple cute animals running around, but most of the story is world building and exposition, which is fine for me, but some of the younger audience may not dig it. 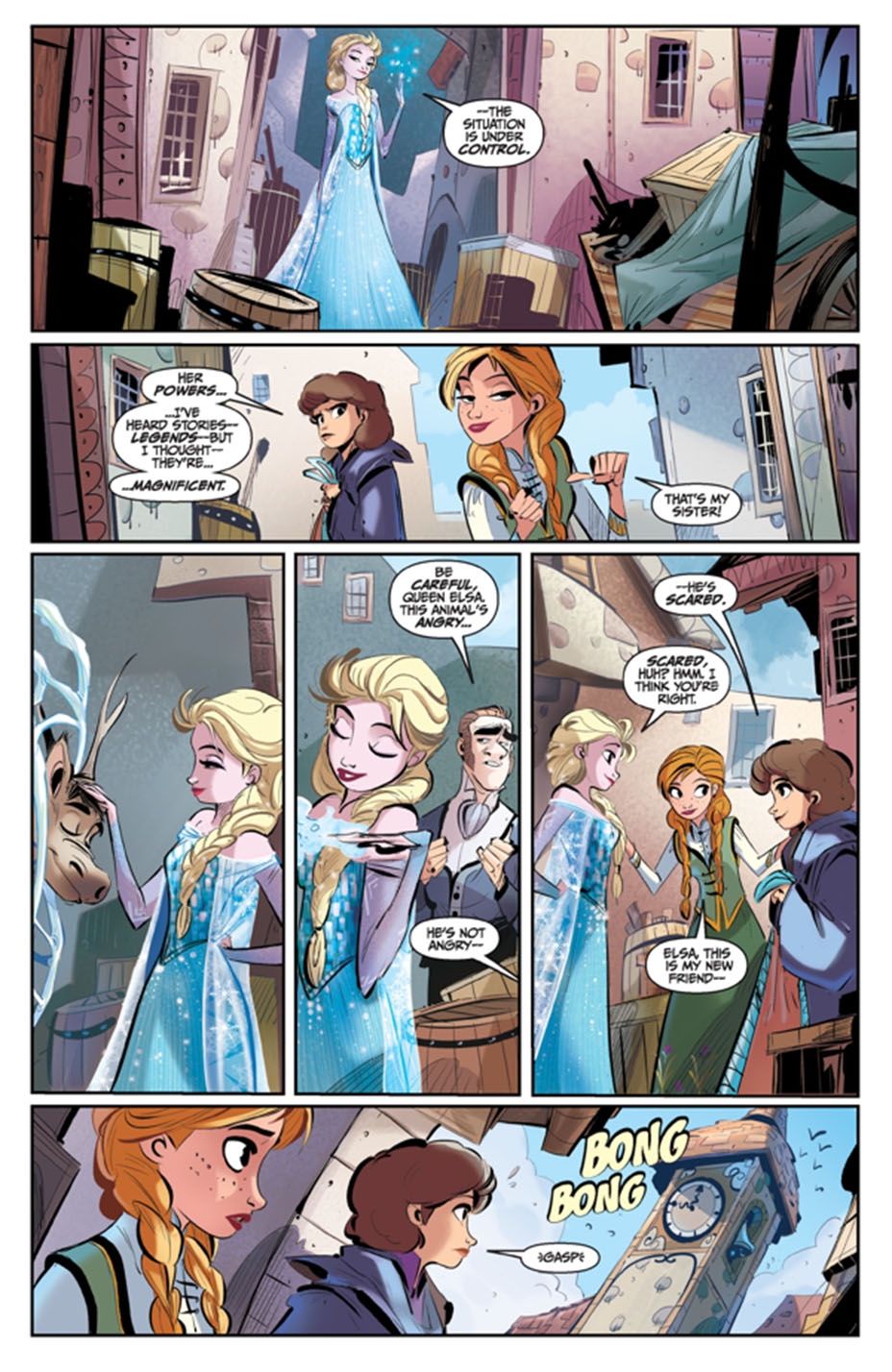 I also like that the creative team is taking the long story format approach here, spanning the tale across multiple issues. I like this better than the approach used by Dark Horse’s other Disney property, The Incredibles, which is one comic book full of short, mini stories. The approach taken with Frozen allows us more time to become invested in the story, which is especially helpful for people like me who approach it with almost no preconceived notion of what I should expect.

Dark Horse’s Frozen #1 is off to a good start here. While I wonder how engaging it will be for the younger set, I found myself engaged more than I thought I would be and I actually want to find out what happens next. There’s a lot of groundwork being laid in this first issue and as such, it’s not a terribly exciting issue, but I’m sure things will pick up in subsequent issues. The story is whimsical, yet mature and the artwork is simply stunning. I also like that there was almost no use of that weird little snowman. I don’t know what his deal is, but he seems like he’d be annoying.