The first thing that pops into my mind when I hear about new Sandman material is this: “Do we even need it?” We all fondly remember the original Neil Gaiman run that was a truly special story and worthy of all the praise it got. What a lot of people forgot are some of the Vertigo spin-offs that it inspired which were largely forgettable. So before even reading [easyazon_link identifier=”B07F6SYDMR” locale=”US” tag=”boundingintocomics-20″]Sandman Universe #1[/easyazon_link], I have concerns about any Sandman that, although plotted by Gaiman, isn’t one hundred percent Gaiman.

Sandman Universe #1 opens with some beautiful art, and the art remains strong throughout the issue with vibrant colors and attention to detail. There are some really nice full pages, particularly one of a, well, of someone called Dora. I don’t want to say much more about it, but believe me when I say that if you care about the art in a comic, I doubt you’ll be disappointed. One thing I particularly liked were the backgrounds which were very strong despite not being the focal point of the panel. 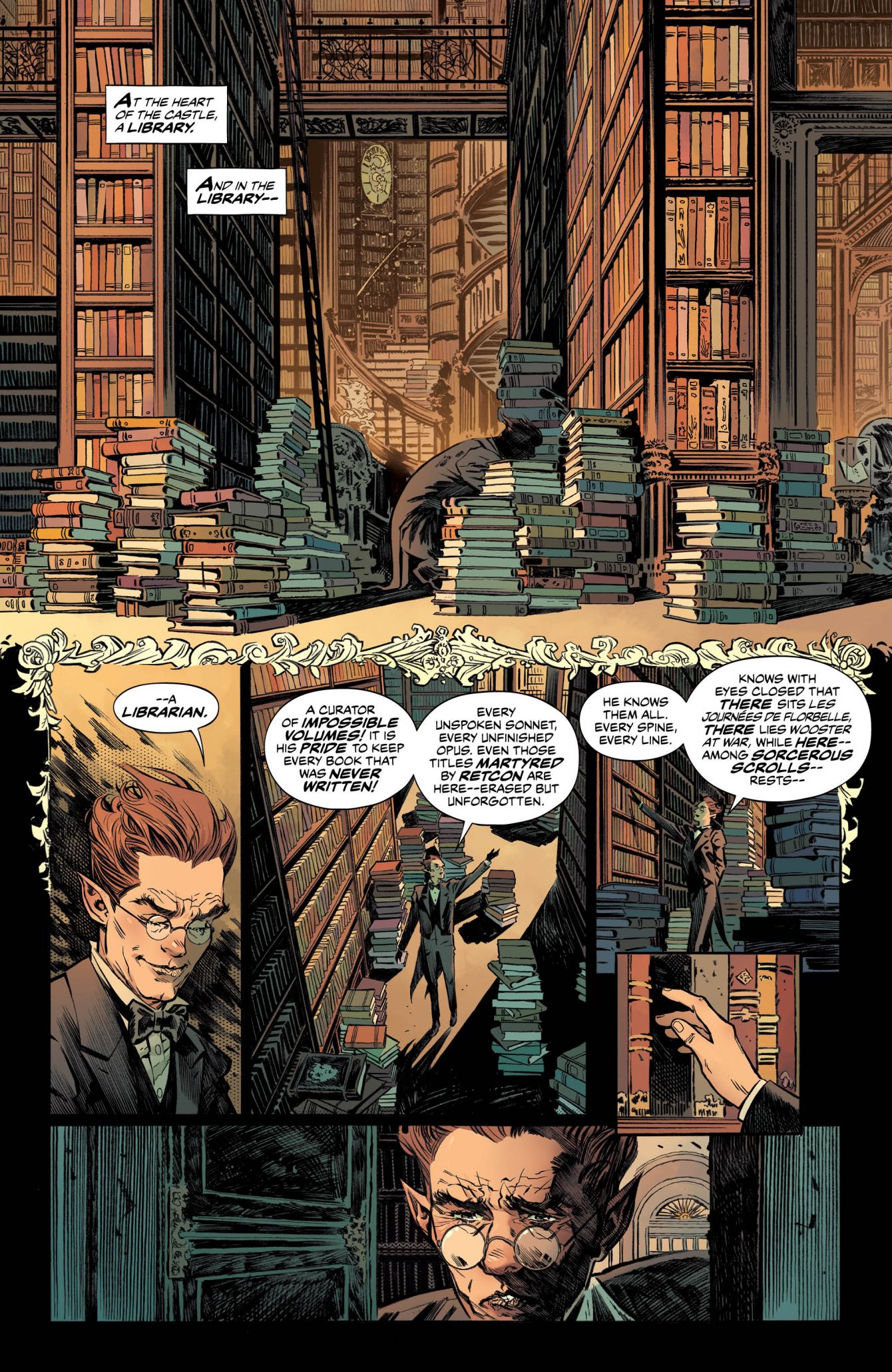 To me, the story will always be paramount in a comic. Sandman Universe’s story begins with Lucien realizing he’s lost a book from his library and starting to slowly unravel. It’s revealed that this version of Dream (the white garbed Daniel) is missing and it’s having a negative effect on the Dreaming. A large crack has formed in the sky, and Cain and Abel show up and behave as they usually do (Abel doesn’t make it) and demand that Dream be summoned.

Dream doesn’t appear available so Lucien (who has been left in charge) tasks Matthew the Raven with hunting him down because “Ravens know things.” It was very nice to see Matthew again and he’s written very well, just like we remember him, loud and unhappy with his task.

We follow Matthew first to a dream where he meets someone who hates Dream and leaves some unanswered questions about herself, but one thing is pretty clear, she has more power than most of the Dreaming’s inhabitants. 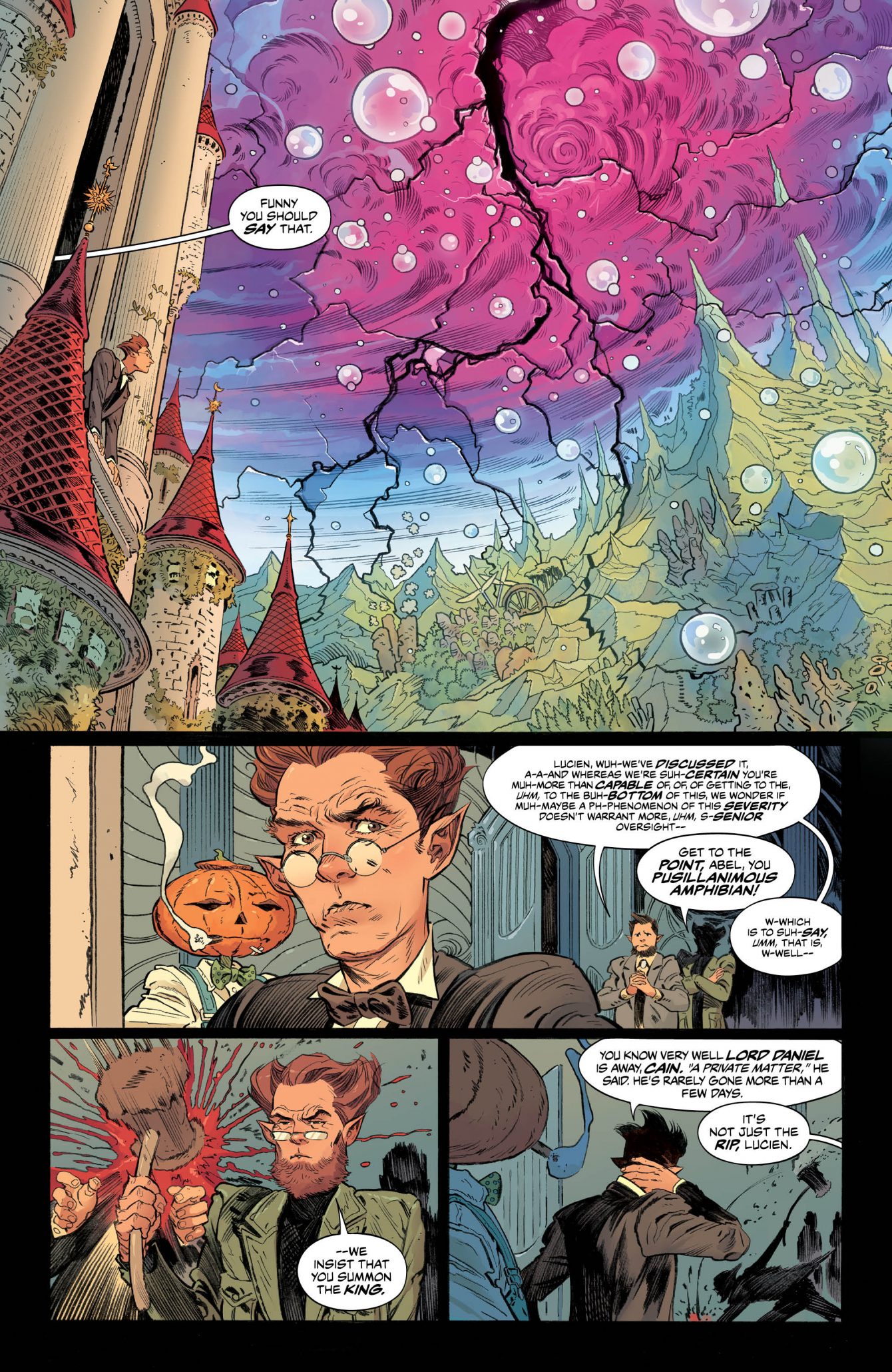 Next up we find Tim Hunter, the young wizard who is late for school. He meets a new teacher who calls herself Dr. Rose and looks insanely familiar to Rose from the original Books of Magic. Dr. Rose knows all about Tim it seems but might be up to something sinister. The art in this bit of the book seemed the weakest, but then again it’s mainly set in a classroom so it’s hard to judge it too harshly.

The next story we see is set in New Orleans where we meet an alligator deity and a woman named Erzulie. From what I’ve heard she’s going to be the owner of the House of Whispers. I’m not real sure what to make of this part of the issue, but I didn’t hate it. It was by far the weakest “story” in Sandman Universe but who knows where it will go as the House of Whispers is supposed to be a problem for Cain and Abel. There’s also mention of a strange book…

Next up: Lucifer. He’s missing and off on another quest. I’m not going to get into what he’s up to but it’s told to the reader via a raven. A dead one. Apparently Lucifer has been capturing and using ravens to his own ends. I liked the art in this segment a lot. Possibly most of all as it had a creepiness and simplicity to it that reminded me of Marc Hempel’s run in the [easyazon_link identifier=”140123545X” locale=”US” tag=”boundingintocomics-20″]Kindly Ones[/easyazon_link]. I’m not sold on the story but if you’re a Lucifer fan it might be your favorite. I still feel like Lucifer’s tale was done at the end of Season of Mists.

Finally, Matthew finds Daniel but things don’t go as planned and Lucien comes to a conclusion that I found very unoriginal. You’ll see. 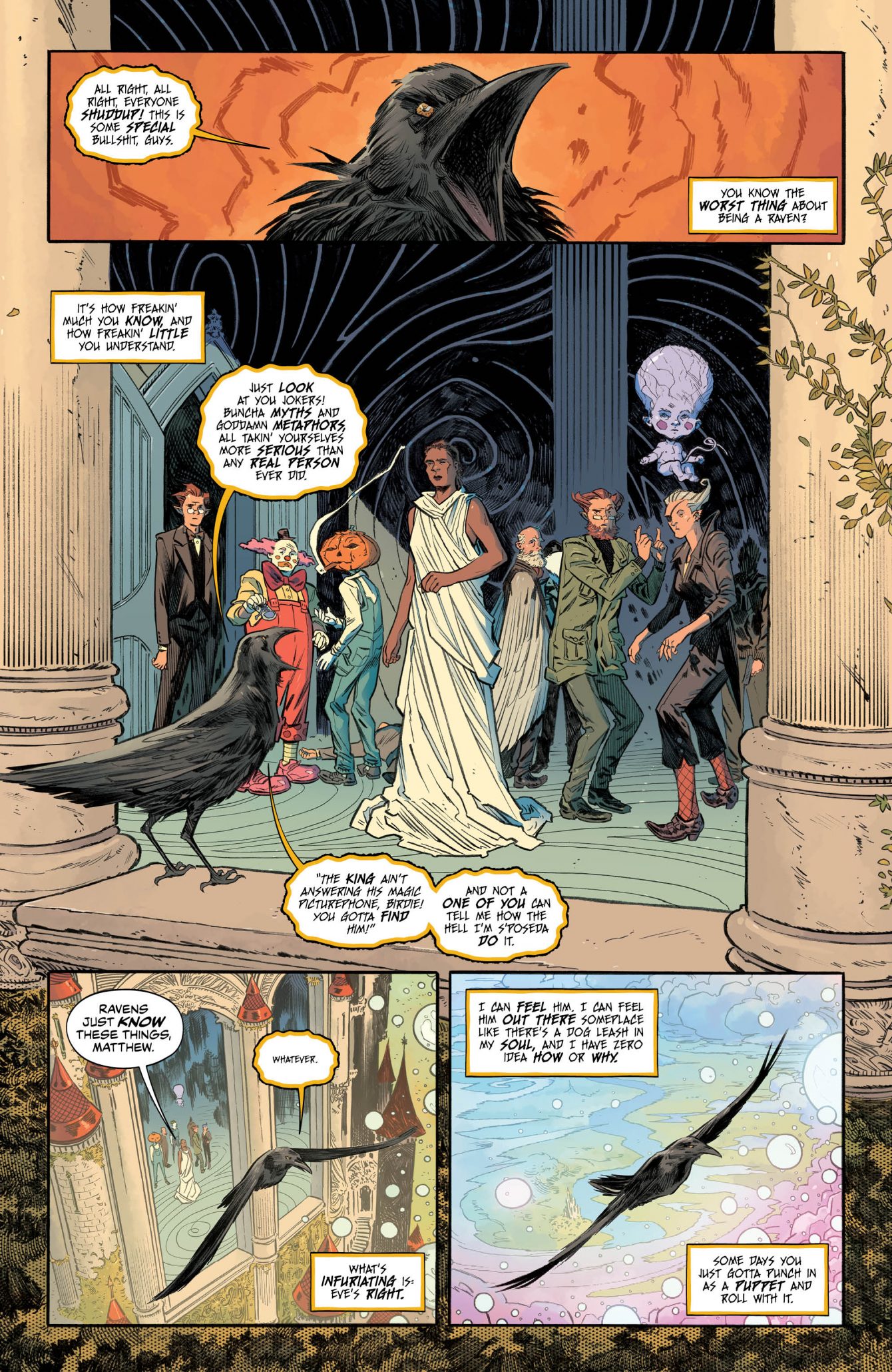 Look, [easyazon_link identifier=”B07G8PYJ3G” locale=”US” tag=”boundingintocomics-20″]Sandman Universe #1[/easyazon_link] is a lot like a sampler platter that shows you what’s to come from the newly revived Vertigo line. It’s got some good stuff and some okay stuff but no downright bad stuff. It also suffers because it’s not actually written by Neil Gaiman. I wanted to love it and feel like Vertigo was about to make a strong comeback but instead I feel more like Vertigo is being roused from a long nap. I’m still not sure we really need this but I’m going to give all the new series their day in court. It’s very possible this new line could be the next generation of reader’s new favorite set of fantasy stories. Give it a look but don’t expect the same joy you had from the first series.