I have really enjoyed the four issue run of [easyazon_link identifier=”B07FNZLWBP” locale=”US” tag=”boundingintocomics-20″]Medieval Spawn and Witchblade[/easyazon_link] from Image and Top Cow Comics. The writing/artist team of Brian Haberlin and Brian Holguin have created one of the most aesthetically pleasing and cinematic comic tales in recent memories. In the final of four issues, everything comes to a head and we get to finally see all of the elements come together in one final, epic conclusion. For the most part, it lives up to the lofty expectations set by the first three issues… for the most part.

The issue begins in truly confusing fashion. The setting is the future and there are a couple of modern day people hanging out in a park awaiting for…someone. It’s an effective bit of foreshadowing, but the problem is that throughout the first three issues, we’ve been given no idea who these people might be as the modern day era has not even been referenced. Maybe I missed a cue here or there, but I was lost on the first couple of pages. 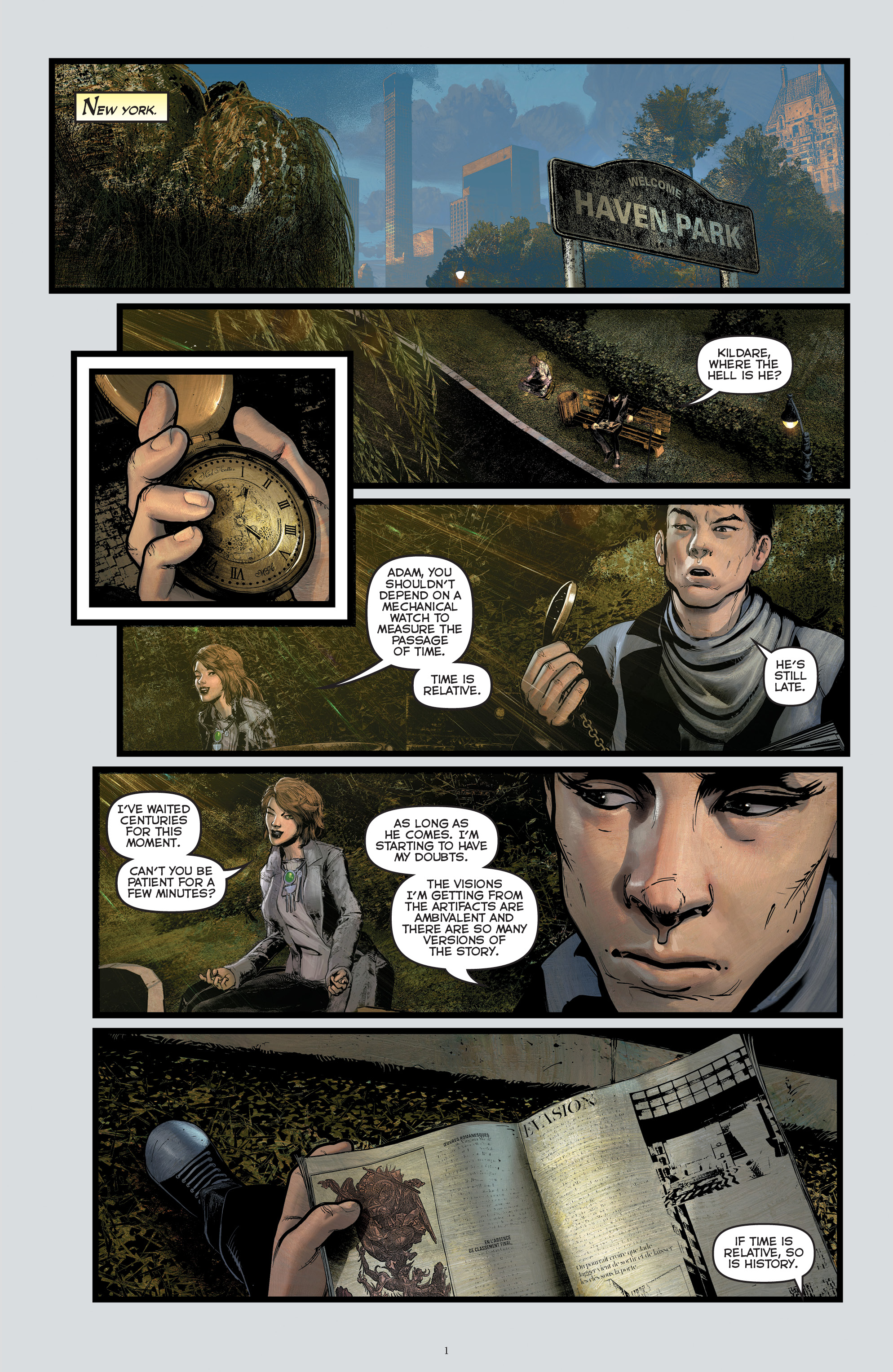 Luckily, we’re quickly thrown back into the recognizable world of Medieval Spawn and Witchblade as the repercussions from the final pages of issue #3 are immediately felt. It’s a little surprising, but the interaction between Starling and Spawn on the first few pages are the very first words these two have shared over the entirety of this run. It seems a little late to save it for the final issue, but it’s not a detriment. I was, however, wishing they could have spent some more page time together before the final page was done.

There’s also been very little in the way of explanation for who was who and what was going on in the first three issues, which means that we get a whole lot of it in this issue. I enjoyed the exposition and surprising reveals, but I felt adamantly that this series would have benefited from at least one more issue. Medieval Spawn and Witchblade has been one of my favorite new mini-series, but by the end it felt all too rushed and I wanted the story to take a bit more time to breathe.

What we do get though, is one epic conclusion to a great series. We knew that the whole ‘good vs evil’ dynamic would come to a head here, but it did so in truly fantastic fashion which afforded us some breathtaking panels displaying artwork that wouldn’t look out of place on the cover of any number of heavy metal band’s album covers… or the side of a sweet van back in the 70’s. The monster design is one of my favorite aspects of this series, and the final manifestation of evil is a wonderfully creative bit of terrifying imagination. My only problem with the final fight is that I’m still confused as to how the heroes pulled off the win. I know Spawn did…. something epic, but the details of it are not expounded upon and while I enjoyed how it all looked, I wasn’t exactly sure what I was looking at. 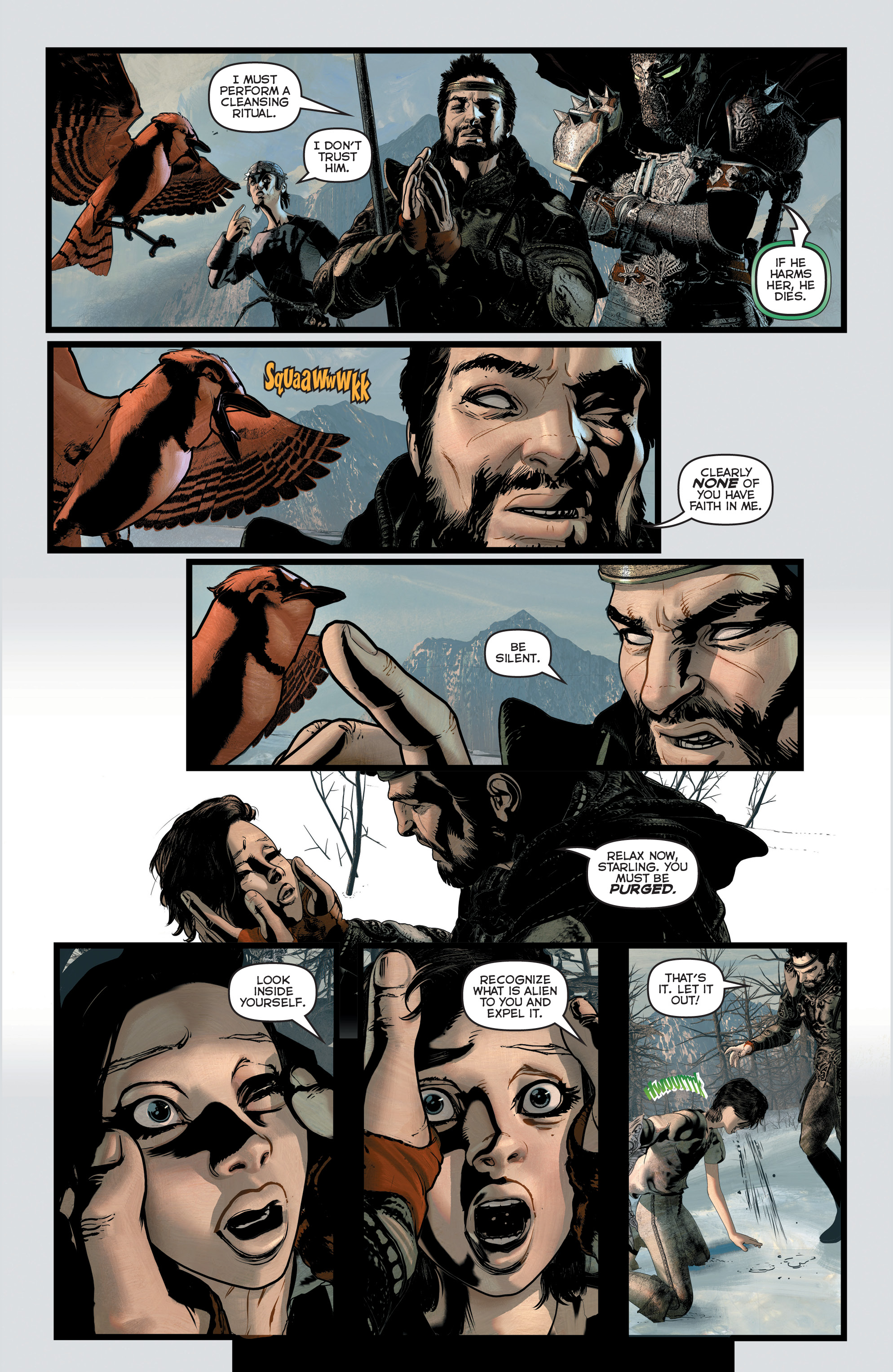 The revelations are also a big plus. There are some genuinely surprising moments of exposition here and it even, at some points, gives the reader some sympathy for the villains. Not enough to want them to win, but enough to make them multi-layered, which is always good. At that, still though, it all seemed a bit rushed. It’s hard for the impact of a reveal to sink in when so much stuff is happening so quickly on the page. It’s good stuff, but it almost necessitates a second reading, which is not necessarily a bad thing.

Things end just as confusingly as it began, with another trek back to modern day with absolutely no explanation as to who the people were supposed to be. It may be a setup for a sequel series and if so, I’m completely on board, but until then, I’ll have to remain confused. That aside, however, this mini-series managed to go above and beyond in every conceivable aspect. The characters, artwork, dialogue, composition, pacing (until the final issue) is all top-notch! [easyazon_link identifier=”B07FNZLWBP” locale=”US” tag=”boundingintocomics-20″]Medieval Spawn and Witchblade[/easyazon_link] doesn’t completely stick the landing, but I’ve enjoyed the flight so much that I can handle a bumpy descent.