“There’s more than one way to fly.”

Hawman has had a tough time lately. Being manipulated by other-dimensional powers in Dark Nights: Metal and having to fight his previous self in [easyazon_link identifier=”B07DTNNMVR” locale=”US” tag=”boundingintocomics-20″]Hawkman #2[/easyazon_link]. Yet the hero seems to be taking it all in stride in Hawkman #3. The archaeologist adventurer stars in a new series from writer Robert Venditti and artist Brian Hitch. One that is surprisingly lighthearted in a DC world that’s dark and dreary. The adventure continues in these pages! Though some of the art looks rushed and the story is a little repetitive, there’s plenty of fun for every reader.

When the DC film universe is looking more lighthearted and weird, the comic Universe is getting darker and more dangerous. Every recent event has featured evil and powerful creatures trying to take over or destroy the DC Universe. As an important magical figure in said universe, Carter Hall has had a small part to play in those stories. While the “Fate of the Universe” is still at risk, this Hawkman story isn’t nearly as dark. Instead pitting its sly and courageous adventurer against dinosaurs, magic gorillas, and more mythical monstrosities. While most of the DC Universe is interested in darkness, Hawkman #3 is heading towards a positive light.

Carter Hall is a relic himself. A remnant of an old time. A constantly reincarnated soul of an Egyptian Pharaoh. To better solve his place in the Universe, he’s spending some time exploring and discovering. A simple story. Apparently the world hangs in the balance, but the pacing doesn’t act as such. It’s not some race against a doomsday clock to save the world, like so many other comics. Instead, every story has a bit of fun and a bit of laughter. Not to mention a Carter Hall who resembles Indiana Jones in the best ways. 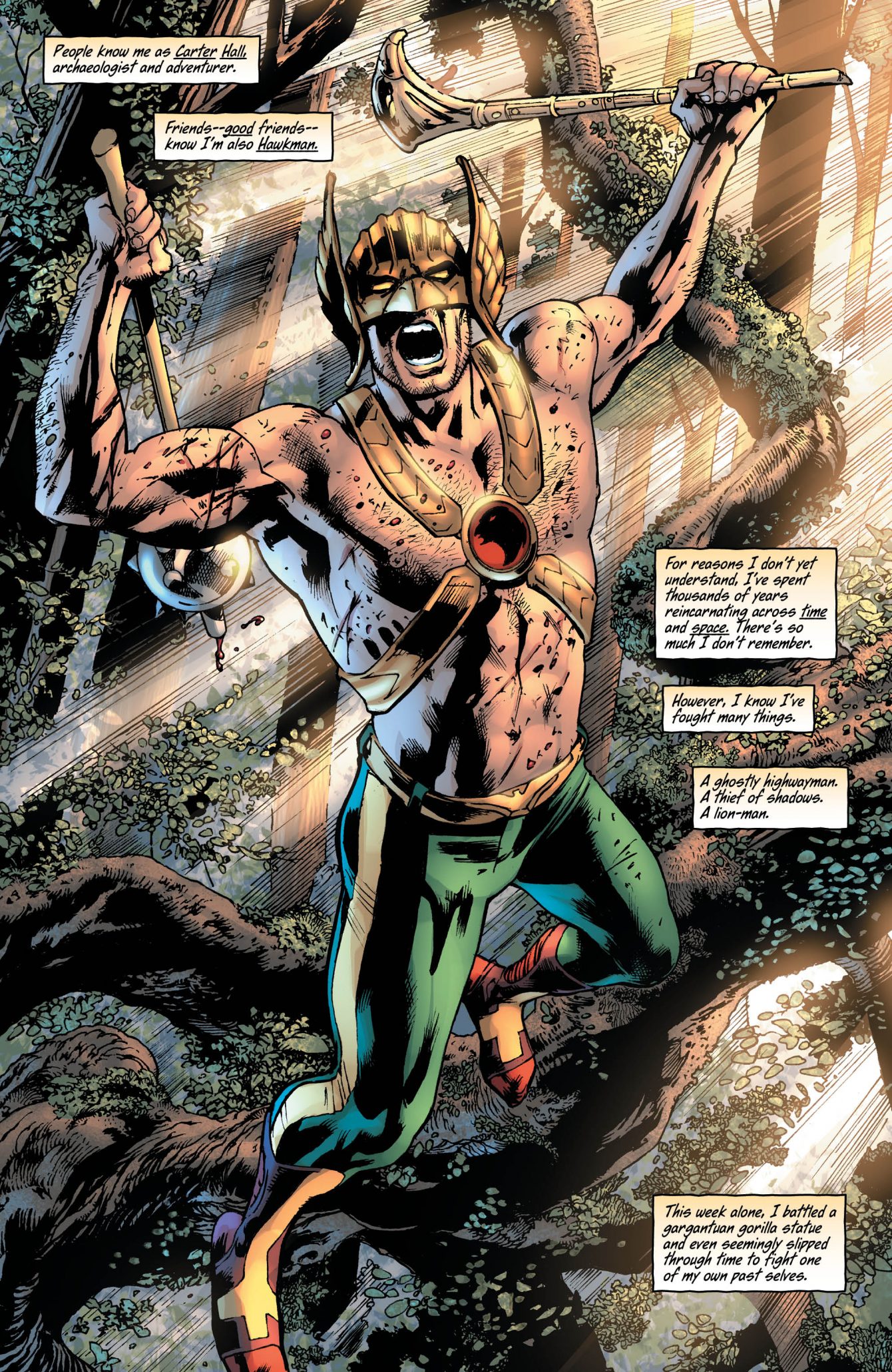 Unfortunately, a couple of comic tropes are starting to make an appearance. The last page foretells of a slightly repetitive villain, and the story structure is fairly similar to the previous issues. Hawkman is fighting a beast, who gives him some minor trouble before he’s easily bested. He goes off exploring before the main point of the story comes along. It works but it’s time to change it up a little. Still, Hawkman #3 continues an exciting and compelling plot that’s obviously building to something awesome. It’s just time to get there already!

Bryan Hitch’s style is certainly epic. Illustrating action is his forte. He creates a massive and expansive page that utilizes every bit of space to the greatest effect. The perfect kind of artist to paint a Hawkman flying in a blue sky. That doesn’t mean some of the pages aren’t without their faults. Some of the muscles can look a little off; some of the pencils are skewed. It won’t pull any readers from the exciting story and action, but it can be noticeable. 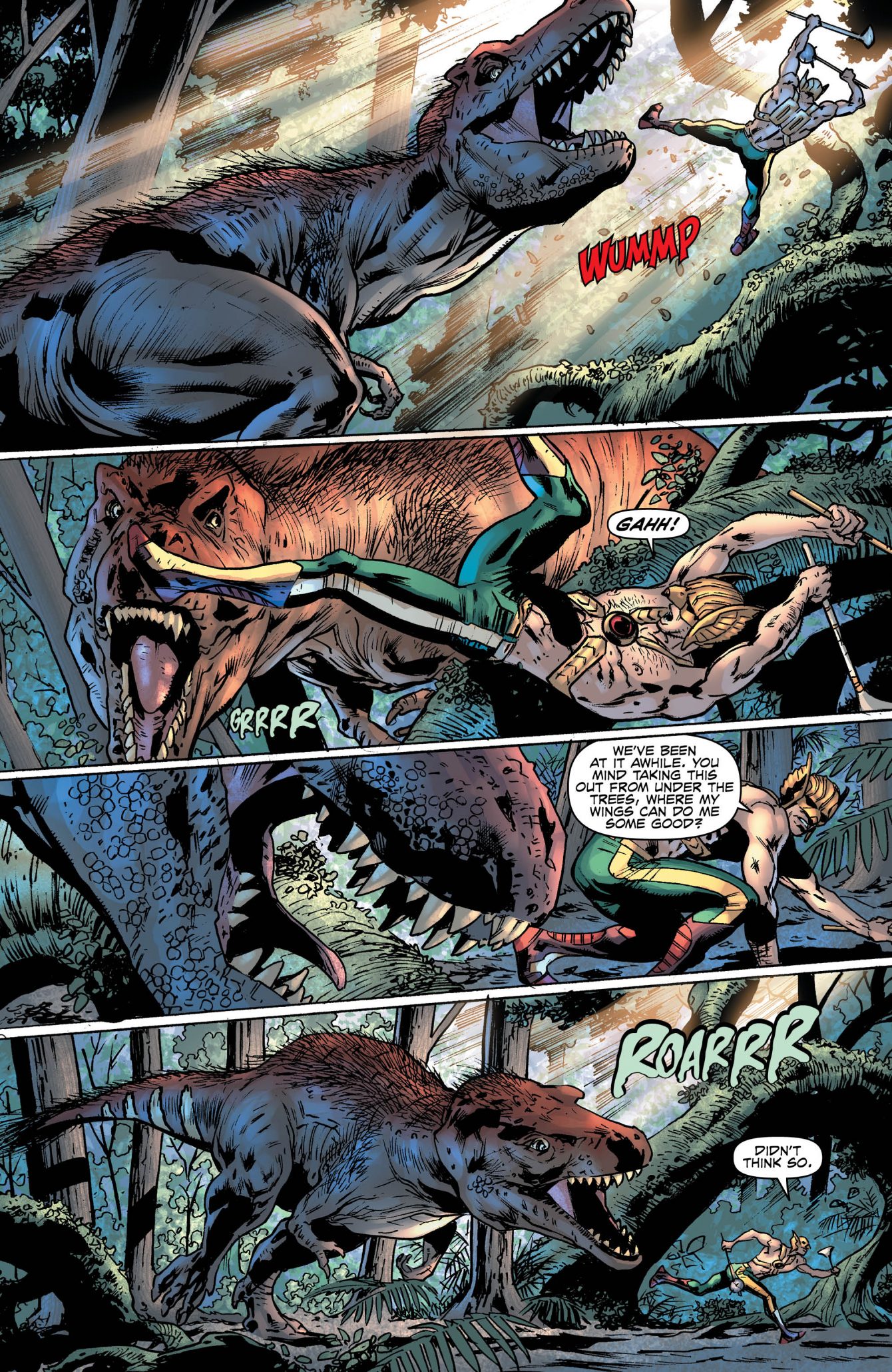 Andrew Currie, Paul Nerry, and Hitch himself provide the extensive inks needed. With work this detailed, one can only imagine the time it takes to fill out every image. Like the art of Ivan Reis, Hitch is amazingly talented at bringing the strangest and most foreign worlds to life. Giving a uniquely creative touch to every one of his stories. Colorists Alex Sinclair and Jeremiah Shipper give those imaginative worlds plenty of colors in the pages of Hawkman #3. It takes a rather large village to illustrate a comic sometimes. But lucky for the readers, Bryan Hitch and company are a great team to bring Robert Venditti’s Hawkman to comic shelves.

Action, adventure, mystery and discovery. Rather than adding or subtracting to the DC Universe. Rather than altering storylines or changing timelines, writer Robert Venditti just wants to entertain you. Every issue of Hawkman has done so, and [easyazon_link identifier=”B07F6V6ZCZ” locale=”US” tag=”boundingintocomics-20″]Hawkman #3[/easyazon_link] is no different. Carter Hall hasn’t always been an interesting hero, but he hasn’t always been a hopeful and curious archaeologist who’s written by Venditti and drawn by Bryan Hitch. Together, this team has crafted an exciting and inviting story that doesn’t have the fate of the Universe hanging in the balance. Unbelievable, right?

While Hawkman #3 doesn’t feature prominently that “fate of the Universe” cliche, it does feature a few others. The same structure as the previous issues and some similar fights keep the story from being truly unique, but don’t keep it from being entertaining. It doesn’t hurt that Bryan Hitch and his amazing art team are creating some beautiful but occasionally flawed pages.

Hawkman is one of the most lighthearted and entertaining stories DC is telling right now, and it’s only on issue 3. No one really knows what the future holds for Carter Hall the Hawkman, but let’s hope that future continues to include writer Robert Venditti and artist Bryan Hitch.