Two senior comic book industry insiders made similar but separate statements announcing that, if someone is a Nazi, said insiders will use their influence to have opportunities for work denied. Earlier this month, Image Comics Co-Founder and Savage Dragon creator Erik Larsen posted a series of three tweets concerning political viewpoints in the industry:

PRO TIP: If plenty of other people who share your political views or are from your specific ethic group are getting work–it may not be that you’re being discriminated against because of that–it may just be you.

Several vocal conservatives have blamed their political beliefs on their floundering careers but many conservatives are working steadily and have been for decades. So maybe it’s not just that. 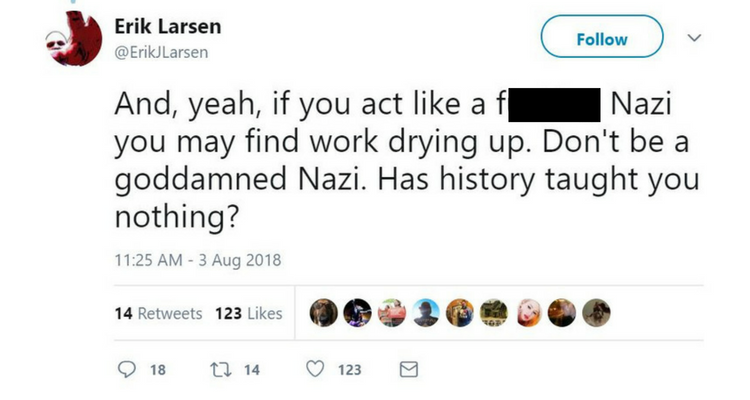 Straight up having a transparent convo with potential collaborators about how I don’t want to work with secret Nazis so they better be cool with touchy-feely comics about acceptance and, you know, not be secret Nazis!!!!

TL;DR: If you are a Nazi of any variety let’s NOT work together EVER.

At face value, nearly everyone on planet Earth would agree with this sentiment. Those who preach disgusting racism and restrict freedoms through violent means would be met with denouncement, outrage, and rightfully deserved protests and boycotts if a known Nazi was hired by a major comic publisher. These tweets, as they read, are not worthy of controversy.

However, in this ever divisive atmosphere of politics, one must ask the pressing question: What is the specific definition of the term ‘Nazi’?

It has become an increasingly common (and if I may be frank for a moment, annoying) occurrence for people to declare someone else a Nazi. The tumultuous 2016 election and the election of Donald Trump saw the prevalent rise of the use of the loaded label by those who sought to fear monger and erode proper debate. If one were to be labelled a Nazi, they would have to defend themselves from waves of harassment, unfair associations with the word, and potentially real world consequences (such as losing a job or even physical assault); the court of public opinion no longer believes in ‘innocent until proven guilty’, but rather ‘guilty until proven innocent.’ Unfortunately, the widespread application of Nazi as a ‘gotcha’ label for political opponents was successful, and the term is now used with a frequency comparable to the 1940s.

Why is this worrying? With such vague definitions, a history of behavior concerning smear campaigns, and a compulsion amongst many to label anyone who disagrees with a term that is neigh impossible to shake, this stance against ‘undefined’ Nazis by two seasoned and talented industry insiders has the potential to grow into a widespread, cabal style union of insiders who act as a hidden council, deeming who can and should be published according to their own secret, internal set of guidelines.

Admittedly, the above scenario seems ridiculous and far-fetched (and even like a situation straight out of a comic book), but the stark reality is that we have already seen other industry insiders seek to block those they disagree with from participating in the industry, such as the massive controversy of Mark Waid using his leverage as pressure against Antarctic Press, the mob justice directed at Will Caligan for his conservative beliefs which resulted in his firing, and the continual, numerous attempts to paint Ethan Van Sciver as an actual Nazi.

These instances and the false morality mobs that seem to be behind them are becoming more common, can be read as unnecessarily hostile by people attempting to break into the comic book industry. Whether a creator, artist, inker, editor, the message is clear: if you do not align with us, you will not be welcome here. In a medium that claims to stand for inclusion and diversity, it is telling that the only way to express disagreements is to attempt to brand your opponent as something that has the worst possible connotations. It appears that people are labeled racists, Nazis, or bigots, simply to give another the moral high ground to attack them.

No rational or sane person would disagree with refusing to work with legitimate Nazis, in any industry. However, in this current political atmosphere, too many seek to play the role of ‘The Boy Who Cried Nazi!’ rather than engage in any meaningful dialogue or even agreeing to disagree. When the definition of the word is so vague and so devalued by overuse, it is dangerous to attack anyone labeled as a Nazi. Gibbons and Larsen deserve the benefit of the doubt: perhaps they are genuinely speaking out against legitimate Nazis (who have become emboldened and more vocal in recent years). Though, given the current state of discourse between comic book creators and comic book fans, it is not a stretch to ask if Larsen, Gibbons, and other industry veterans are speaking out against said Nazis or are simply buying into the constantly regurgitated lies spread regarding those that do not see eye-to-eye with their industry peers.