Batman’s strict code of ethics is arguably the most famous superhero limitation in history. Even more than Superman, Batman does not kill. To a fault, the Caped Crusader prefers his criminals more alive than dead. At one point in history, it made the character stand out as the pinnacle of justice; a staunch believer in justice and judgement above his own desire for vengeance and revenge. It’s truly a remarkable testament to his character’s growth from angry and sad child to valiant superhero. But over the years, that rule has caused a number of problems. Horrifying, murderous villains escape and run rampant, continuing their reigns of destruction because they’re never put to an end.

Apparently, Gotham doesn’t have Capital Punishment. This has led to many an awkward moment between Bruce and the Batfamily, and even more so in recent years, where writers like Grant Morrison and Scott Snyder are cleverly inventing ways to challenge that rule.

Still, Batman remains as non-lethal as ever. As many know, he didn’t start out that way. 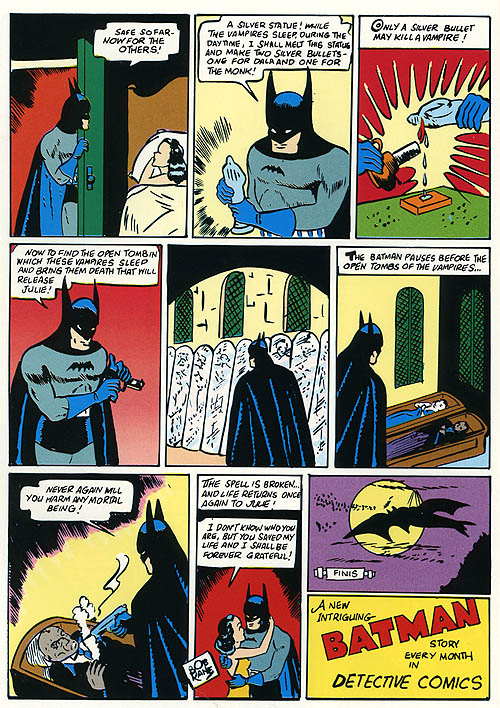 Outside of Batman v Superman: Dawn of Justice, the character has never been “trigger-happy,” but he has used a gun. He has killed, and not just on the big screen. In Brian Azzarello’s Knight of Vengeance, Bruce Wayne is killed in the alley, leading to a murderous Batman in Thomas Wayne and a psychopathic Joker in Martha Wayne. [easyazon_link identifier=”B00DZUE7YM” locale=”US” tag=”boundingintocomics-20″]Grab Knight of Vengeance here and help support Bounding Into Comics![/easyazon_link]

I’m not advocating for Batman to become a killer superhero. Not at all. This is about breaking down what it means to be a superhero, and whether or not allowing bad things to continue is part of that job. It’s about whether or not the killer of Jason Todd, for example, should still be on the loose.

That’s an important detail here. This is in no way, shape, or form about Batman murdering supervillains or baddies. There’s no reason he has to change his approach to catching villains. He doesn’t have to start carrying a gun. It’s really more about a writing standpoint that needs to change. This is about The Dark Knight. That’s right, the most famous Batman story on the big screen ended with Batman killing Harvey Dent/Two-Face.

Most fans didn’t realize he was deceased until the sequel, but that’s what happened. In fact, Aaron Eckhart didn’t know his character’s fate either. The actor famously asked Christopher Nolan about Harvey Dent, and wasn’t even able to finish the question.

It makes sense that Harvey Dent/Two-Face died at the end of The Dark Knight. Why? Because Jim Gordon’s son was about to die at the hands of Two-Face. Rather than take any chances, Christian Bale’s Batman dove at the villain at the very last second, nearly killing himself in the process. That’s the kind of Batman that needs to exist in the comics. It creates more thought-provoking writing, increases the drama tenfold, and makes for a much more interesting story. He was willing to kill a murderer in order to save an innocent life.

Ben Affleck’s Batman machine-gunned his way through some SUV’s in Batman v Superman: Dawn of Justice. That was utterly ridiculous and unnecessary, based on some ridiculous notion that the character was “out of sorts” or “in a bad way.” Horrible justifications for what was probably an after-thought to the filmmakers. No one should take Batman killing lightly, least of all the creators who bring his stories to life.

At the end of the day, the “No Kill Rule” has been used to justify why all of Batman’s villains are still alive. He’s got the most horrifying Rogue’s gallery in the entire comic world… chock full of the kind of terrifying creatures that will murder until the end of their days. 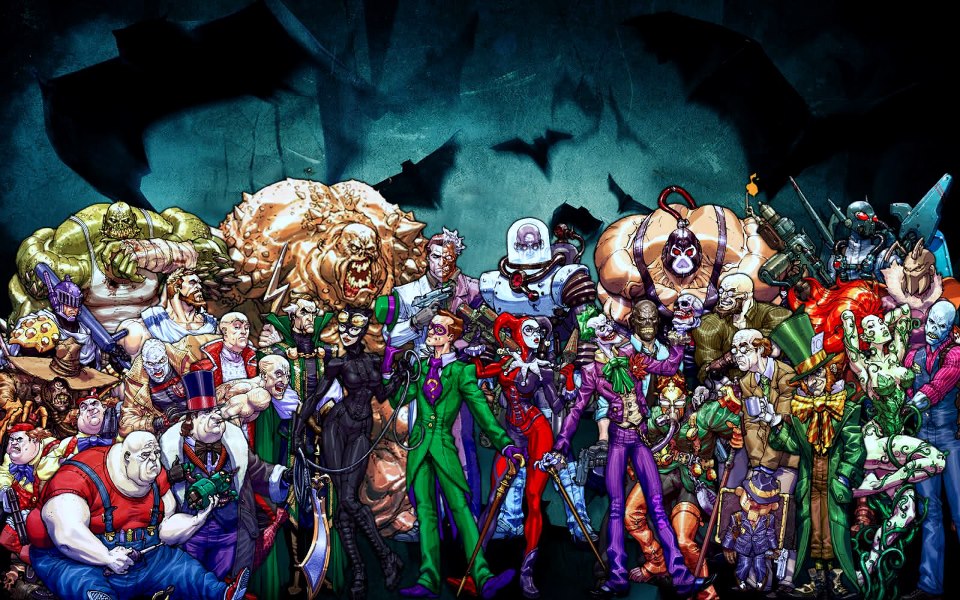 How can a hero live with himself if he lets all of them live? That’s not the point. Once again, Batman should never start going on murderous rampages through the dank and dark streets of Gotham. No comic should ever advocate that kind of response to crime, lest the hero succumb to temptation and become a villain themselves. Batman is a symbol meant to inspire fear and good. That means bringing the criminals in when it can be helped. Saving everyone when possible.

That doesn’t mean letting everyone live because some writer is going to need that villain next week. That’s one of the many problems with having 37 different Batman stories coming out every week. Everyone knows that nothing in comic book history is permanent, least of all character deaths. But it feels as if the villains are often equipped with more “plot armor” than the heroes.

Writers, in comics and live-action formats, have avoided writing no-win scenarios for the Caped Crusader. That brief exchange with Harvey Dent at the end of The Dark Knight was the exact kind of writing that can elevate the character. It’s not enough for the superhero to just outsmart his villain. This is about stopping the murders of hundreds of people. Was there a moment in writer Tom King’s Batman #48 where Batman could have prevented the Joker from killing any of those innocent Church-goers? Not really, because it was written that way.

Many of Gotham’s citizens suffer because of Bruce’s “No Kill” policy. Violent criminals like Zsasz and Scarecrow, and grotesque masterminds like the Joker and Mad Hatter have walked the streets of the comic’s most famous city for decades. Tormenting those that are just trying to get through the day. In different interpretations of his history, Bruce’s father Thomas loved and cared for the poor of Gotham. He, like Bruce, inherited his wealth and importance. He became a doctor instead of a businessman, dedicating his life to saving the people of his beloved city.

That’s a difficult legacy to live up to, even for a kid with a “normal” upbringing. Unfortunately there’s nothing “normal” about Bruce Wayne’s life. The fact that Thomas was a doctor could be a factor in Batman’s No Kill Rule. While that’s never been outright stated, it’s an interesting piece of subtext that makes it more of an emotional choice than a logical one. So if it’s not the best decision, and if it causes problems, why not change it?

Whether or not he continues to kill, Batman does help people. That’s not in doubt. But if he were to change his ways, Gothamites’ lives could be greatly improved. Having less supervillains to worry about vastly decreases the chances of dying in one of their attacks. That’s just statistics. If Batman were to remove the villains when they went too far, say after they’ve gone on a rampage, it would be much more justified. No one’s saying Batman should ever kill Kite Man… 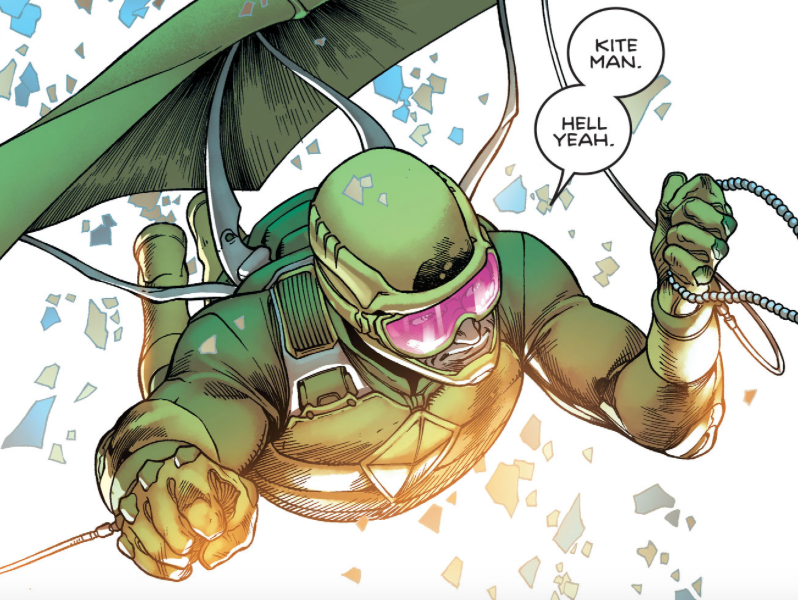 Kite Man is a harmless thief often on the wrong side of the law. The exact kind of villain that deserves a good punch or ten, but never death.

The man known as Bruce Wayne should absolutely be willing to pull a trigger or throw a Batarang if it meant saving that innocent victim in Joker’s arms. The same could be said for any other villain. If a physical exchange or gadget won’t work, innocent life needs to be saved, over the lives of the villains. As Batman is reminded: Jason Todd died and the Joker lived. That’s an inexcusable truth that should haunt Batman to the end of his days.

Batman needs to be the better man. He needs to rise above the occasion and be that which everyone else is incapable of being. Jim Gordon said in The Dark Knight, “he’s the hero Gotham deserves, but not the hero it needs right now.” That line has been misquoted for years, but that’s it. The crux of the statement being that Batman must become a criminal to ensure that Harvey Dent would be seen as a hero. Instead of muddying the character’s legacy by letting the public know of the tragic and horrible last days of his life, the Batman became a murderer. Arguably the greatest piece of storytelling to feature Batman actually answered the “No Kill Rule” by placing it right in front of Batman. Christian Bale’s Batman did what was needed in the moment.

He saved Jim Gordon’s son. Unfortunately, it took the death of Harvey Dent to do that. It wasn’t even as clear-cut as a shot to the face. Batman merely dove at Dent and took the same fall he did. Luckily, the armor absorbed much of the fall and the bullet from Dent’s gun.

Christopher Nolan and David S. Goyer weren’t afraid to challenge Batman’s rule right in front of everyone, and almost no one noticed. Fans haven’t been questioning the death of Harvey Dent in the “Nolanverse” because it was absolutely justified. More writers, comic writers, should follow suit and start to question the rules and restrictions that have previously defined heroes like Batman. How else will they evolve? How else will fans get more dramatic and compelling stories that question hero’s morals?

It’s time for DC and Batman to start telling stories that question the rules of the character. It’s time for Batman’s “No Kill Rule” to come to an end.