Actress Ruby Rose quit Twitter after a number of fans began attacking her for not completely fitting the archetype of Batwoman found in recent comics.

Last week it was announced that John Wick 2’s Ruby Rose will be starring as Kate Kane a.k.a Batwoman in an upcoming Arrowerverse crossover event in December.

But she wouldn’t just be making a cameo appearance. The CW plans on giving the character and the actress her very own series as they continue to expand their DC Comics related shows which now includes Black Lightning, Arrow, Supergirl, and The Flash.

Ruby Rose was so excited that she posted the news via Instagram:

The Bat is out of the bag and I am beyond thrilled and honored. I’m also an emotional wreck.. because this is a childhood dream. This is something I would have died to have seen on TV when I was a young member of the LGBT community who never felt represented on tv and felt alone and different. Thank you everyone. Thank you god.

In the post, she opened up about how it was a childhood dream of hers to get to this point. She also mentioned the importance of LGBT representation in the character.

She reiterated this in an interview with Jimmy Fallon.

If you are unfamiliar with Batwoman, the character was actually introduced as a love interest to Batman back in 1956. The character would eventually be completely removed from DC continuity in 1985 with Crisis on Infinite Earths. However, DC would reintroduce Batwoman in 2006 in their weekly comic book series 52 as a woman of Jewish descent who is a lesbian.

While Rose is a lesbian, she isn’t Jewish and it didn’t take long for a Twitter mob to light their torches and sharpen their pitchforks over the actress’s ethnicity. They didn’t like that a non-Jewish actress would be playing a character of Jewish ethnicity.

Some even called into question whether she was a lesbian or not despite the actress having come out at the age of 12.

Some of yall are acting like if the lesbian they cast was a better actress or whatever it would’ve been fine. But it needed to be a jewish lesbian from the get go. The biggest problem with ruby rose’s casting is that she is not jewish.

Not only does ruby rose not identify as a lesbian but she’s not Jewish either. So…they basically lied about it wanting an actor that represented the diversity to stay true to who batwoman is and instead just picked a “hot” white person that isn’t too gay to offend the straights

But it didn’t stop there. Other users demeaned her personally as a token lesbian for Hollywood:

Ruby Rose being cast as Batwoman feels like The CW didn’t even try to look for actual talent.

They grabbed the ONLY lesbian Hollywood knows of and called it a day like ¯\_(ツ)_/¯ pic.twitter.com/4Rqz8q9JKa

Im just sad that when it comes down to lesbian representation, the same names always come up. As if ruby is the only gay actress you could have picked. It would be nice for us to be introduced to a new, less known actress who couldve taken this as an opportunitie.

Ruby rose is not the only lesbian actress in Hollywood?give to lesbian actresses the chance to get a job and to diversify the images and the voices of the lgbtq community being not represented by the same person every damn time. Representation AND DIVERSITY MATTER??

Ruby Rose responded to the backlash by quitting Twitter, but not before she said her piece. 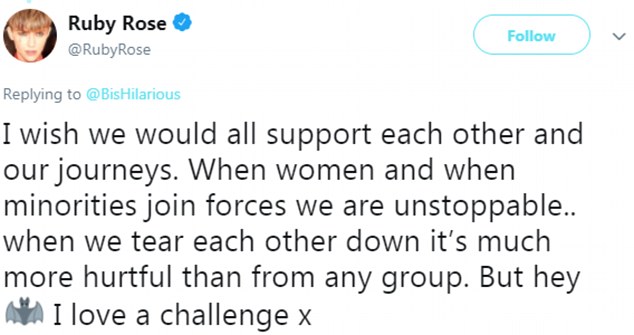 Rose specifically pointed out the type of attack she was being hit with. 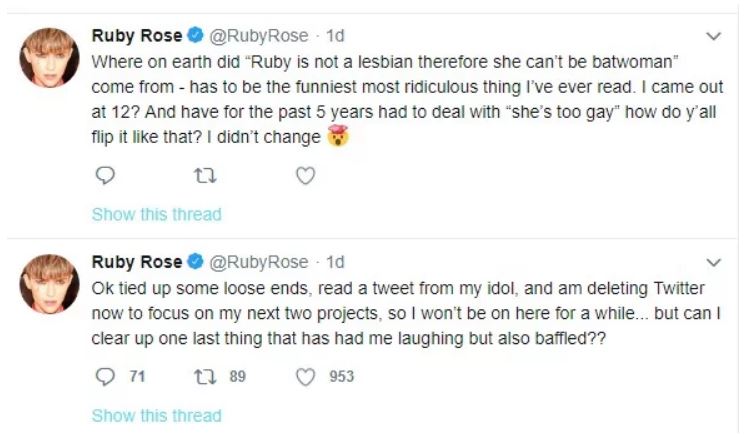 YouTuber I Love Comics addressed those going after Ruby Rose:

“Back off guys, you are going to find out that nobody wants to produce a show with LGBTQ members in it lest you jump right down their throats saying they are doing it wrong.”

The entire argument about Rose not being gay enough or not being Jewish is just silly. It doesn’t show respect for the actors who make it their life’s work to portray people they’re not.

What do you think? Will those who are demanding representation eventually find themselves not getting any because of the way they are acting? Are you excited to see the DC Arrow-verse continue to grow with Batwoman?