The X-Men continue their fight against global hate, but can writer, Tom Taylor pull it all together?

For those not familiar with the Everybody Loves Jean world tour that is X-Men Red, the book, written by Tom Taylor (Taylor, not King, no they are not the same person), centers on the adventures of recently re-resurrected Jean Grey and her army of X-Men.

I have something of a “Meh/Indifference”-type relationship with the book thus far. For all that it’s not, I’ve kept it on my pull-list just to see what’s going to happen next. So, I suppose it’s succeeding there. I will admit, the last three issues, including the latest, X-Men Red #7: Atlantis Smashed, have been incremental steps in a more tolerable direction. 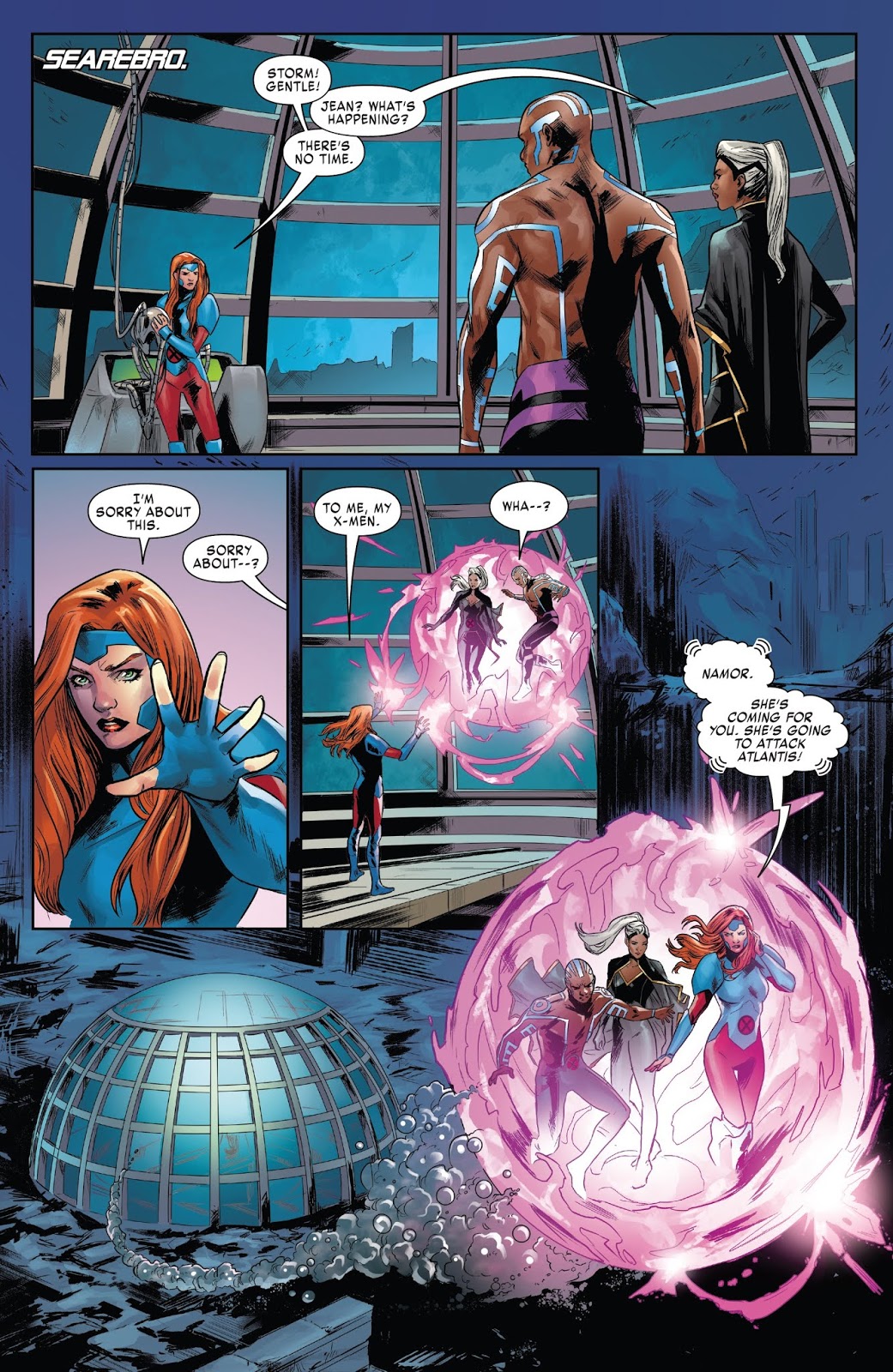 The issue starts off in Atlantis with Jean inside of her version of Cerebro, which Gabby (Honey Badger) aptly dubbed Searebro, accompanied by Gentle and veteran X-Man, Storm. The underwater city is being attacked by Teen Abomination (*sigh*). Here’s where my first concern comes in. Perhaps it’s a miscommunication between Taylor and Red artist Carmen Carnero (who’s doing a bang-up job on the art in this book), or maybe I’m missing something. I get how telekinesis works. What I don’t understand is how they got outside of Searebro. That trail of air-bubbles be damned. Moving on. 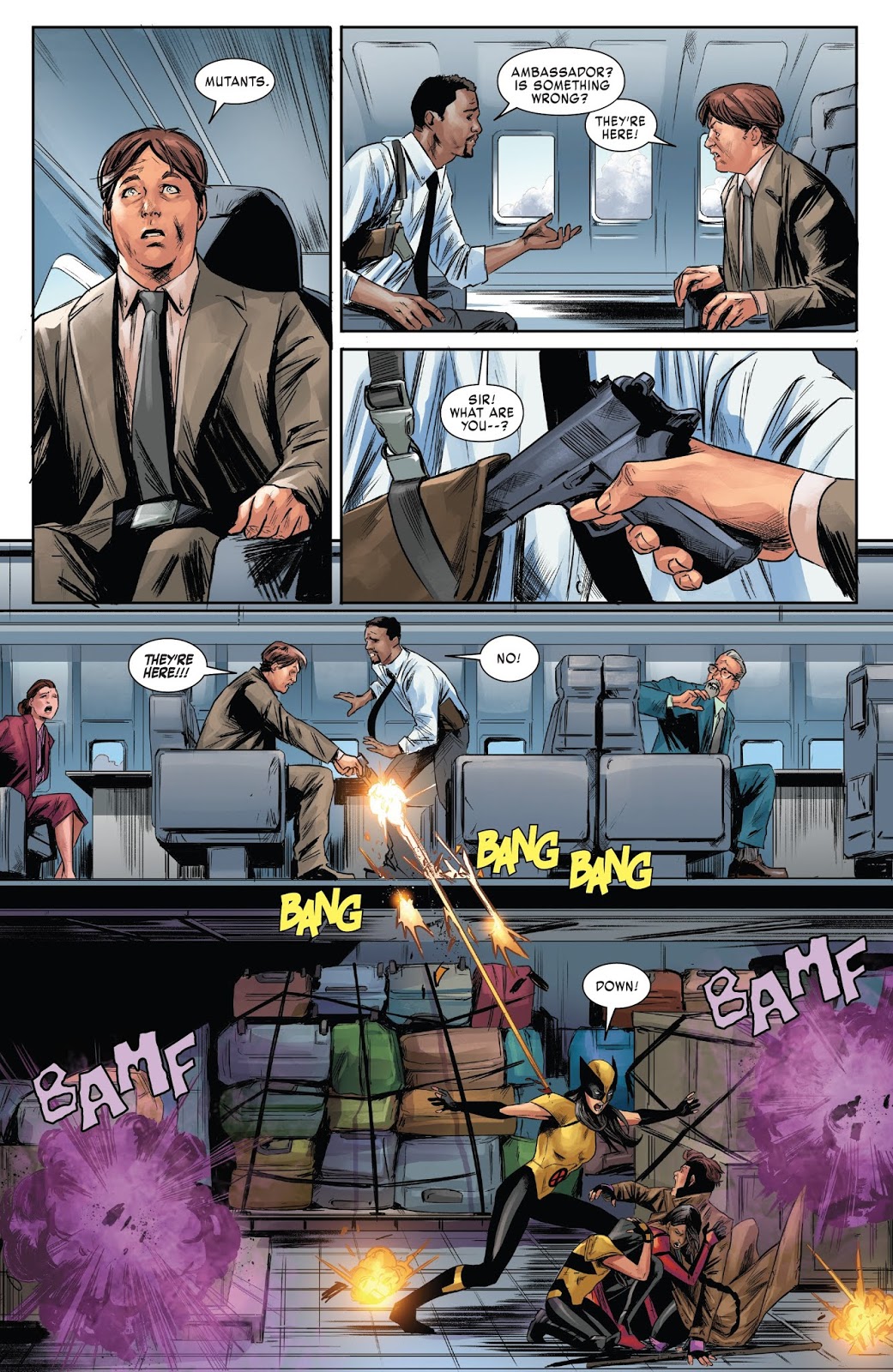 Elsewhere, in search of a dead ambassador’s phone, the other half of Jean’s X-Men brigade infiltrated a plane in the previous issue. Long-story-short, the plan goes awry and rookie McGuffin-I mean X-Man-Trinary, takes a bullet to the hip. The trauma causes her to lose connection to their pet-Sentinel, and in a very nicely illustrated scene, it crashes into their plane, which obviously creates another problem for the team. 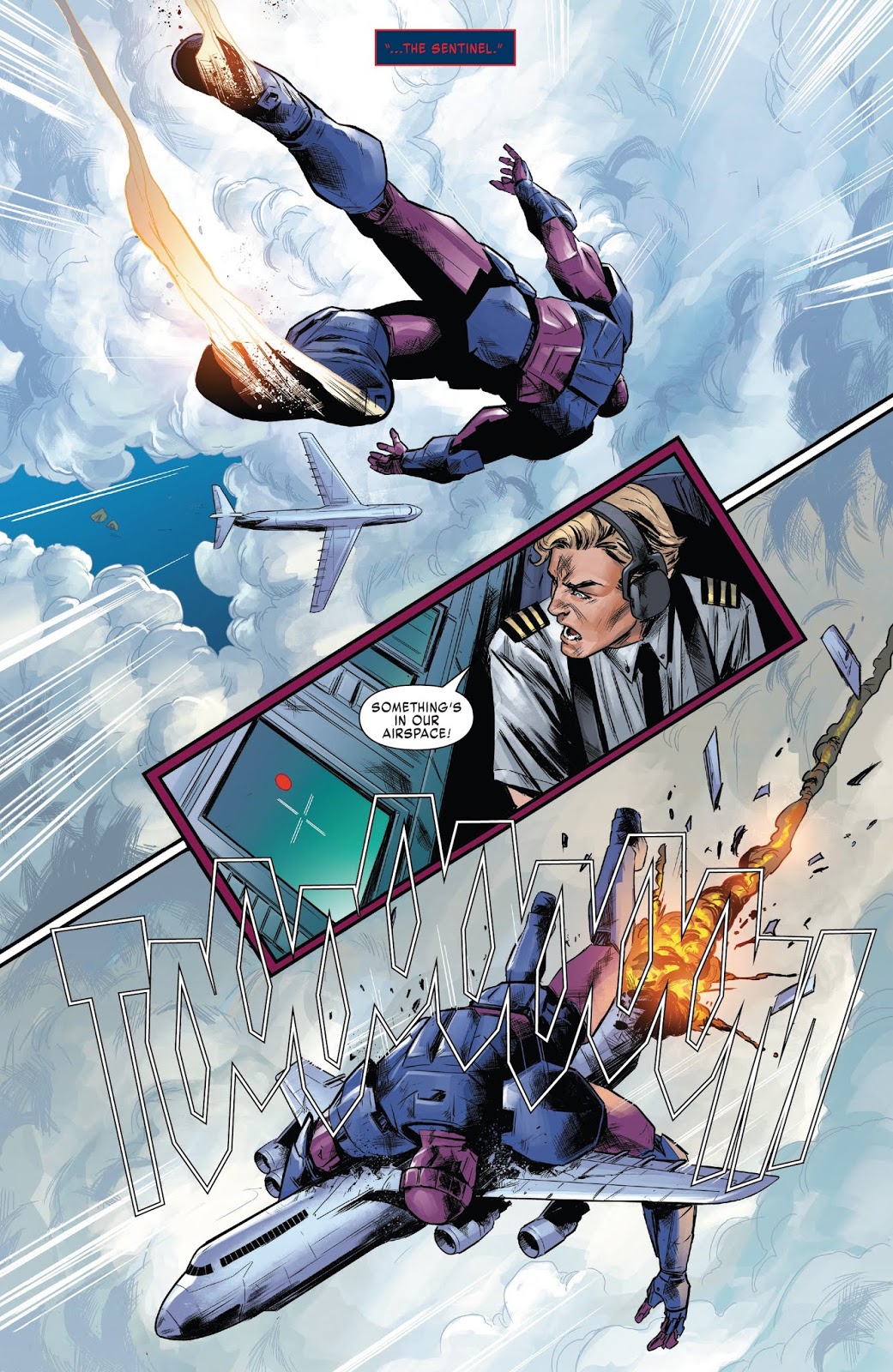 Mr. Taylor’s script, even if it’s kind of by-the-numbers, plays out fine. However, there are a couple points where, as a reader, you must invoke your suspension of disbelief. One such instance is Teen Abomination’s attack on Atlantis not being met with any resistance. This is a country that was recently involved in a war. Devastated or not, I’d expect someone other than Namor to show up, even if to merely serve as cannon fodder. Atlantians are something of a Warrior-race, so to me, this is odd. Not a big deal. Just odd. 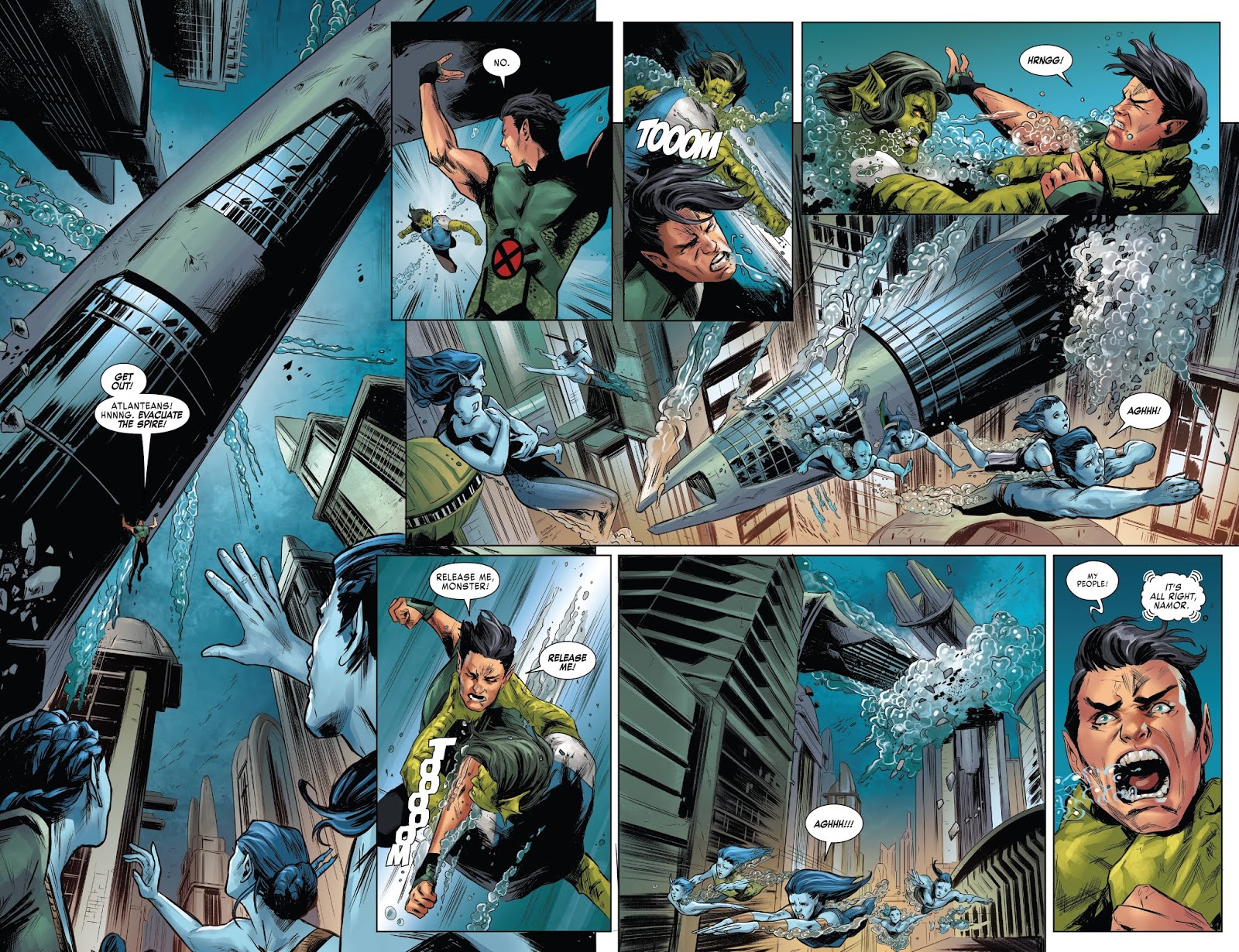 What does distract me is the dialogue. Sometimes it flows very nicely. Organic even – other times, not so much. Some of the characters come off as robotic in their deliveries, most often Jean herself. This is a shame because historically she’s been portrayed as being full of emotion and passion. Something the Phoenix fed off, in fact. Hopefully, this becomes part of a subplot: The quest to locate Jean’s lost personality.

Visually, the book is in a good place – if not in places hampered by choices in the coloring. It’s been a pet peeve I hoped would have gotten addressed upon Carnero’s arrival, but it continues. The use of shadows and darker shades is so heavy at times it makes the art look gloomy and slows everything down. Perhaps that’s just me. Otherwise, X-Men Red is one of the prettier things to look at in Marvel right now. [easyazon_link identifier=”1302911678″ locale=”US” tag=”boundingintocomics-20″]Grab your copies of X-Men Red here and help support Bounding Into Comics![/easyazon_link]

Despite my critiques, X-Men Red is currently the best team-book in the franchise. Still, it can stumble over itself. Some of the more underlying themes seem out of place as Taylor attempts to contemporize the narrative. I think it’d be all the better if Taylor handled it closer in the way he does his projects over at DC (check out ‘why Lobo shouldn’t have Power Ring’). Art is good, colors could be better – the script is ok, could be more focused. This giant roster of X-Men, half of which have been teammates for years with complex connections to each other, feel almost like strangers. Sadly, Gabby, the darling that she is, seems to be the only one allowed to show signs of life. With that said, X-Men Red continues to display promise. Looking forward to seeing it all come together. Cheers.