Comics are for everyone. Everyone except Comicsgate, they can die from dick cancer.

A number of fans and customers would make it clear they would not be purchasing anything from McKone in the future.

My wallet says “thank you” for your clear message. It will stay closed for you too. You guys are saving me SO much money.

WOW ?, always been a big fan and supporter of your work through my store … guess we’ll be dropping you back to Subs only from now on. Not a great way to talk about Fans or Consumers Mike

I guess that’s even more money i can spend on indie creators… pic.twitter.com/9rSpD8gXJY

While others would point out that McKone’s Tweet could easily be viewed as misogynistic.

Isn’t that exclusionary and misogynistic to all the women in comicsgate?

What about the Comicsgate girls? Cervical or breast Cancer? Inquiring minds want to know.

? Whew! I dodged a bullet with that threat!?

Others would condemn McKone for making light of cancer.

A dear friend of mine died of prostate cancer this year, leaving behind his wife and two kids. Cancer is not a joke. the fact oyu wish it on anyone is horrible. You are a despicable being. I am not even bothering calling you human, cause that would imply humanity. which you lack

Just another totally normal person taking the moral high ground while wishing death upon those he disagrees with.

As a teen I used to really look up to a lot of comic artists like Mike. Now all I see is a complete lack of professionalism and little human decency which makes it impossible to buy work from him. Where’s the leadership? Get these idiots off twitter @JimLee @CBCebulski

My father-in-law died of heart cancer. I take great offence to what he said.

McKone would double down on his Tweet claiming a bunch of “sweaty white dudes” were mad at him.

The last time this many sweaty white dudes were mad at me, I’d accidentally cut in line at Dollywood.

He would also insinuate he received death threats following the Tweet.

Death threats are one thing, but this…this is just offensive. https://t.co/SgecYYyXQa

DC Comics writer Jeff Parker, who has been helming their Future Quest series, would weigh in on McKone’s original Tweet.

a definitive statement, hard to misread. ?

Interestingly enough, Parker was just recently supporting a GoFundMe to help a man named Rodney who is suffering from Bladder cancer. 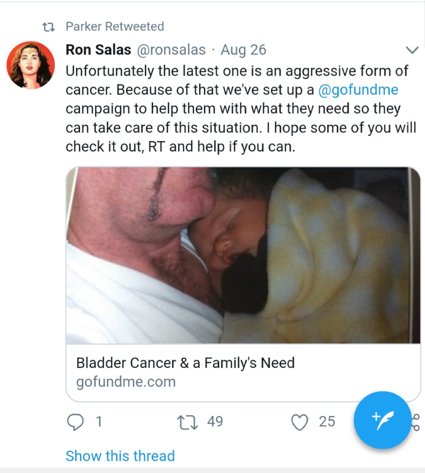 McKone’s threat against ComicsGate is the latest in an ever-growing list of comic book professionals who appear to be reacting extremely negatively as they see the comic book industry dying in front of them.

But not only are they seeing the industry’s sales declining, they are also seeing the wild success of Ethan Van Sciver, Jon Malin, Diversity & Comics, Mitch Breitweiser, Alterna Comics, Timothy Lim, Jon Del Arroz, Mike S. Miller and others find success on IndieGoGo by treating their fans and customers with respect and dignity.

Treating customers and fans with dignity and respect appears to be a winning message for ComicsGate creators and fans affiliate with movement. If only other professionals would get the hint, I’m sure the comic book industry could easily be turned around and revitalized!