I’ve been a fan of Donny Cates’ [easyazon_link identifier=”1935002775″ locale=”US” tag=”boundingintocomics-20″]Babyteeth[/easyazon_link] since issue one and I have to say if you’re not reading it, you truly are missing out.

We start off in Palestine, where our main characters Sadie (the anti-Christ’s mom) and the Captain (Sadie’s Dad) are holed up and have been for a while since Clark (the baby anti-christ) went missing with Sadie’s sister Heather. For company they have Olivia and Simon, who have pretty much gone through the exact same thing Sadie’s going through and lived to tell the tale, with Simon being able to actually go back to where the baby anti-Christ has been taken. The trouble is, Olivia is combative about trying to get Simon to open the portal to the other realm, and there’s a fair amount of tension in a room where a mother can’t find her kid, anti-Christ or not. 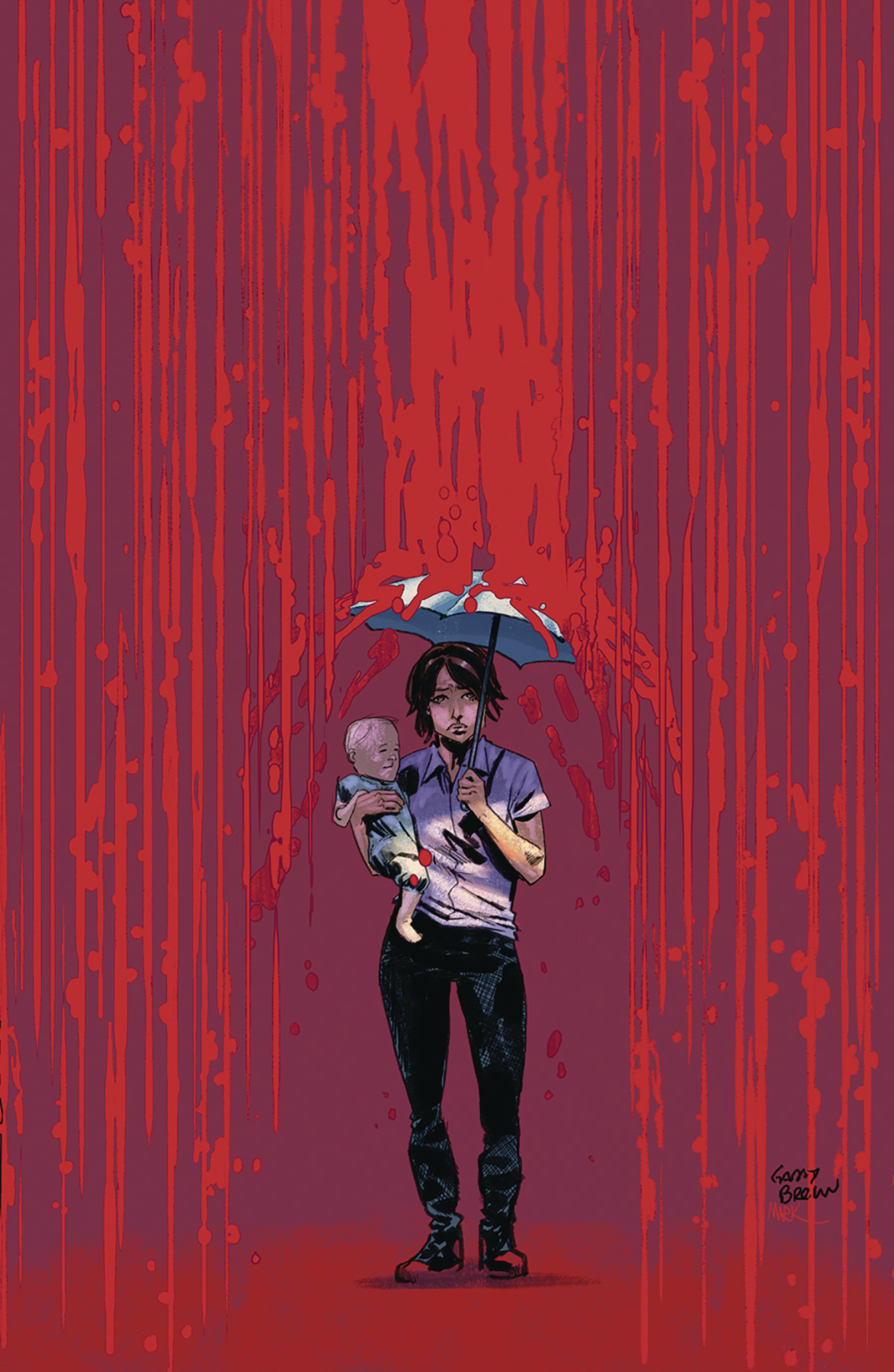 As the story has progressed up to this issue, so have our characters. I seriously feel close to all of them, some more than others. I think that since I’m a father to girls I relate to the Captain more than Sadie but it doesn’t detract from the story. Honestly, there’s a scene with a birthday cake that felt so natural it could be happening at anybody’s house, minus the whole anti-Christ stuff. Any parent can easily identify with Sadie by just imagining they don’t know where their baby is, and the converse is true for Olivia as well. Nobody wants some stranger trying to put their kid in harm’s way. It’s hard to pick a side in a debate like that.

The art in Babyteeth is solid and compliments the story well with its somewhat dark colors and solid facial expressions. When the mood calls for it the colors can flare up (as they do in a scene where someone tries to startle someone else). Garry Brown, who is a co-creator on the series and isn’t mentioned enough seems to get stronger with every issue and can flip the look of the book when he needs it to get bright which it does later in the story. Much, much brighter, but only in a literal sense.

I think if I were to have one gripe about this book is that it always seems to fly by. Seriously I get into the meat of the issue and always feel like it’s a shorter comic than all the others on the market. It’s not. This book is really so good that I don’t think I’ll ever feel like quitting it. The thing about Babyteeth is that it always leaves you wanting more and this issue was no exception.

This is a great book. Every month I look forward to it. The story is original (and for eagle eyed readers you’ll note that it ties into several of Cates’ other work) and its characters are likeable to the point of you finding yourself rooting for the anti-Christ, and I was raised Catholic. If you were to read it in trade format you might have a different experience, possibly better, but no matter how you slice it, this series is fantastic!