Despite this being the first issue in the series, Beasts of Burden has actually been around for quite some time. Conceived by writer Evan Dorkin, Beasts of Burden first popped up in 2003 in The Dark Horse Book of Hauntings, they showed up in a few other Dark Horse publications through the years and grew in popularity to the point that they eventually got their own series in 2009. Since then the diverse cast of animal characters has garnered the book accolades and acclaim and even got itself a [easyazon_link identifier=”B01661E22I” locale=”US” tag=”boundingintocomics-20″]crossover with Dark Horse’s crown jewel, Hellboy[/easyazon_link]. Beasts of Burden: Wise Dogs and Eldritch Men is the newest story line in the revered series and writer Evan Dorkin, with a new artist, is back at the helm.

The Wise Dogs are the stars of the show this go around. Beasts of Burden has employed several different animals in its stories over the years, but the Wise Dogs take center stage for this run and their personalities and interplay between one another is what earn this first issue its highest marks. The Wise Dogs are a group of diverse K9s who, on top of being able to speak and put up a decent scrap, are some sort of protectors of the world and employ super powers, mystic abilities, and Lovecraftian looking elements to fight off evil. It’s all the more charming in that they still just look like regular dogs while doing all of this stuff. 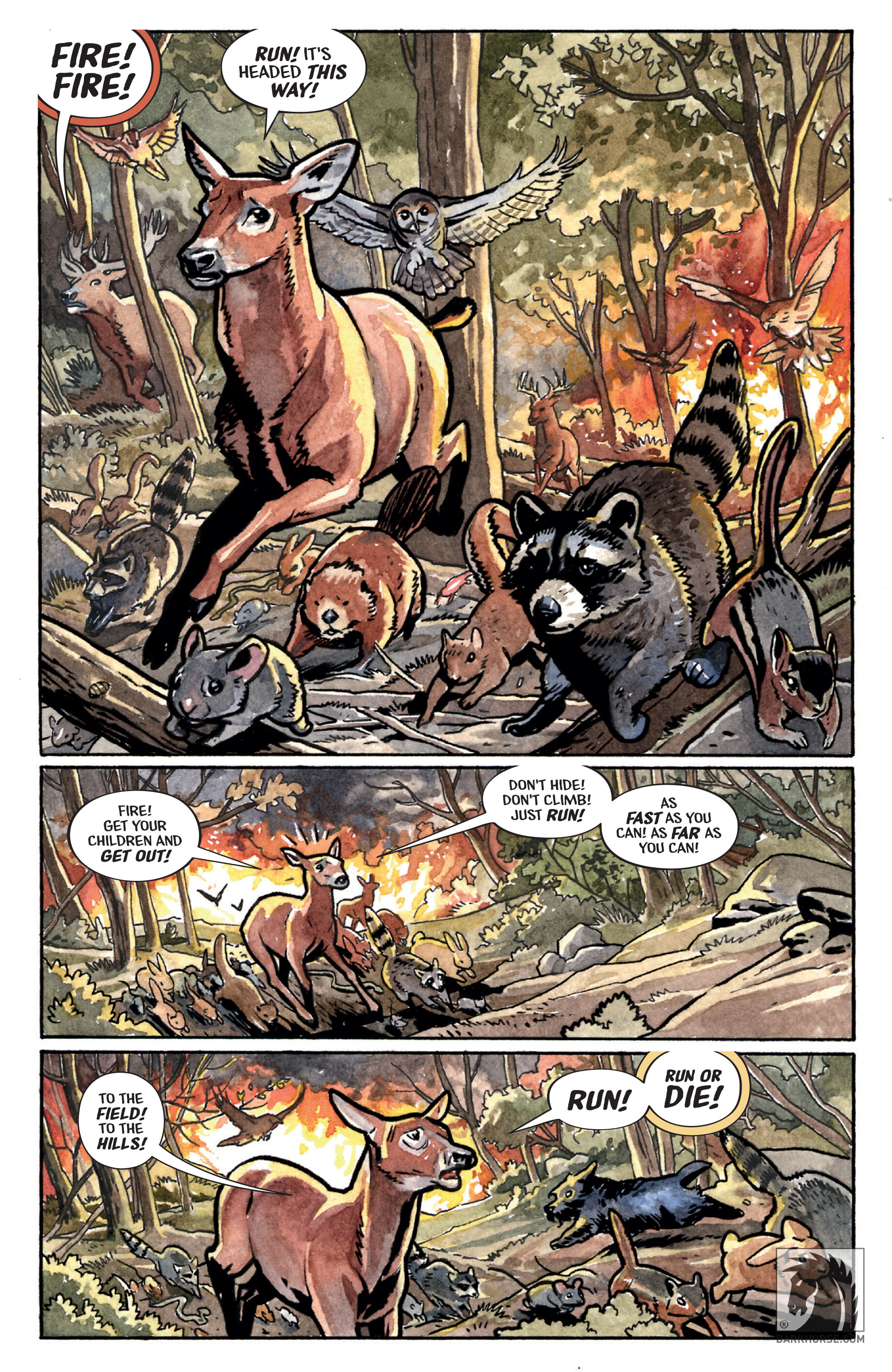 After saving a forest and all of its animal inhabitants from a freak forest fire, the dogs determine that there’s more at play in the fire and further investigation leads them to some monstrous discoveries of….. well, monsters, and demands every ounce of strength they have to fight them back into submission. It’s not revealed what the underlying factors at play are, but such is the nature of the first issue of a mystery story. The unknown elements are indeed intriguing and that, coupled with the fact that the Wise Dogs themselves are a great group of protagonists, equals a book that does a great job of sinking its teeth into the reader from the outset.

The writing, in particular the dialogue between the dogs, is fantastic. Each dog has their own defined personalities and they shined through exceptionally well, especially for one introductory issue. I could practically hear the different breed’s accents coming through as I read their conversations. It’s smart writing that does a great job of giving life to the characters and adding depth to an already interesting story.

That being said, I did feel somewhat that I was supposed to already be at least a bit familiar with these characters. This is the first Beasts of Burden story I’ve read, but as it’s a first issue in a new story, I reckoned that I would not need a lot of pre-knowledge concerning the universe. In most aspects I was right, but I still felt like I missed the introductions at the beginning of the party. It’s understandable as Beasts of Burden has been around for while now, but I couldn’t help but feel I was walking in on a conversation that had already been started. It’s hardly a detriment to the book, as long running series will always pose this problem, but it should be known if you’re a newcomer looking to jump in. 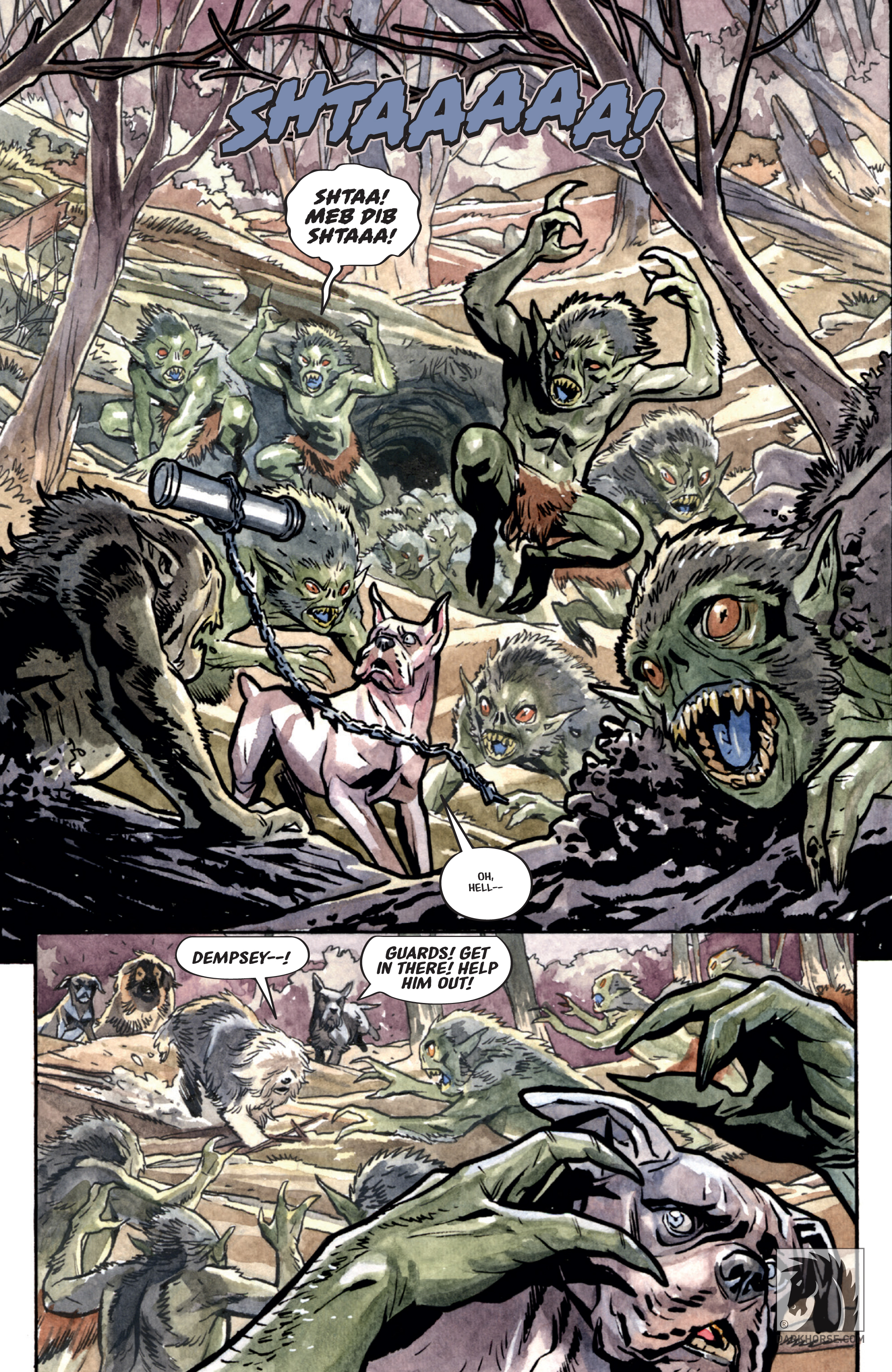 As far as the artwork is concerned, longtime fans may notice the absence of series stalwart Jill Thompson. Her artistic talents have become synonymous with the series since the beginning, but artist Benjamin Dewey takes the reigns for this run and he carries the torch admirably. Artwork is beautiful across the board and every panel is filled with meticulous details. The characters are all rendered in a way so that they emote extremely well, which is no small feat when you’re dealing with realistic looking animals. The only knock against the artwork is that the watercolor style coloring, while beautiful, can sometime end up looking a bit muddled. It can occasionally become difficult to ascertain what is happening from panel to panel with the the jumble of colors on the page. It’s a small knock, however, as I do truly love the artwork in general.

[easyazon_link identifier=”B07DTYN376″ locale=”US” tag=”boundingintocomics-20″]Beasts of Burden: Wise Dogs and Eldritch Men #1[/easyazon_link] is a charming and engaging beginning to a new magical mystery. There’s a lot of charm and wit in the writing, but there’s also an underlying darkness to the world and that is what will bring me back for issue #2. The world feels fully realized, the dogs are full of personality and are fleshed out characters, and the mystery is interesting, if not yet quite fully realized. If you’re a fan of mystery, magic and mastiffs, then Beasts of Burden may be worth your time!