Santori would quote tweet Marvel and DC Comics colorist Tamra Bonvillain who also insinuated that Ethan Van Sciver is part of the alt-right.

Not that I think there’s much doubt where he stands these days, but EVS is openly using a common alt right antisemitic dogwhistle “cultural marxism” for those still not paying attentionhttps://t.co/jb6vcJ6BY6 pic.twitter.com/io9bAdrKJg

Santori would add to that by insinuating that Van Sciver is a Nazi referencing Van Sciver’s art book titled, “My Struggle:”

But yeah, please tell me how “My Struggle” was just an in-joke. https://t.co/9YvzhaHEWm

First off, plenty of people use the term “cultural marxism” who do not identify with the alt right. Director of The American Conservative Center for Public Transportation and conservative author William S. Lind traces the phrase back to Marxist theorists Antonio Gramsci and Georg Lukacs. Lind writes, “Western culture and the Christian religion had so blinded the working class to its true, Marxist class interest that Communism was impossible in the West until both could be destroyed.” Lind also describes cultural Marxism as multiculturalism and Political Correctness. It’s a term plenty of conservatives and Republicans use. Even a recent headline in The Washington Times uses the phrase.

As for the insinuation that Ethan is antisemitic for using the term, he’s previously denounced this accusation. He told us, “I find racism deplorable, I find bigotry disgusting, and I have never engaged in racial politics or “Naziism”. My children are Jewish!!! I am a moderate Republican.”

It appears Bonvillain has an axe to grind against Ethan Van Sciver and is willing to dip to the bottom of the barrel in order to attack him.

Santori tries to use Bonvillain’s same tactic, but he also adds “globalist” in an attempt to insinuate that Van Sciver is a “Nazi.” President Donald Trump has even used the term before to describe the wealthy Republican donors the Kock Brothers.

The globalist Koch Brothers, who have become a total joke in real Republican circles, are against Strong Borders and Powerful Trade. I never sought their support because I don’t need their money or bad ideas. They love my Tax & Regulation Cuts, Judicial picks & more. I made…..

Millions of people across the country voted for Donald Trump. Does Santori think these millions of Americans are actual Nazis?

Santori also mentions that Ethan referred to Washington Post writer Noah Berlatsky with an anti-Semitic description. As with his attack of Cultural Marxism, this is a borrowed attack from Berlatsky.

yeah; worth pointing out that “chicago 8 looking friend” here is code for the fact that I’m Jewish.

(Ethan’s probably too dumb to fully understand his own knee-jerk bigotry, is my guess. Giving him the benefit of the doubt.) https://t.co/EpBF49XJcF

Ethan responded noting that he was referring to Berlatsky as a radical:

Could just be that you resemble a late 60’s hippie radical, but sure, let’s go with the bigot angle!

The Chicago 8 included David Dellinger of the National Mobilization Committee, Rennie Davis and Thomas Hayden of Students for a Democratic Society, Abbie Hoffman and Jerry Rubin of Youth International Patrty, Bobby Seale of the Black Panthers, Lee Weiner and John Froines. They were charged with “conspiracy to cross state lines with intent to cite a riot” following the actual riots at the August 1968 Democratic National Convention. They and their attorneys were found “guilty of 175 counts of contempt of court.” All of the defendants except Froines and Weiner were found guilty of intent to riot. They were sentenced to five years and fined $5,000. However, they didn’t actually serve any time as a Court of Appeal overturned the convictions and most of the contempt charges were dropped.

It’s a pretty wild assumption to think referring to the Chicago 8 is anti-Semitic.

Santori would not be deterred now that he demonized Van Sciver. After defaming Van Sciver, he would go on a screed against those who have been silent about ComicsGate.While 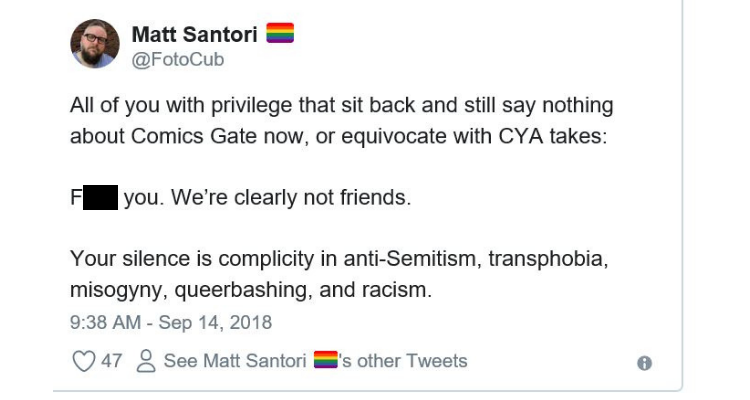 I’m tired of playing nice and being understanding of straight, white men who write super-heroes, with unassailable platforms, that can’t muster the courage to speak up for the attacked and marginalized in real life.

Do whatever you feel you need to in order to protect your precious feelings, but stay out of my DMs with your excuses and promises. Your “You know me. I’m on your side.”

It’s bad enough we have to sit here and be called “faggot” and anti-semitic slurs and, as the case may be, any number of racist and transphobic and misogynistic slurs.

Then having to listen to your indignence or equivocation when we BEG for support? It’s twice as painful.

To those who have spoken up, unequivocally, who used their significant platforms to stand by their marginalized peers and fans? I will always always be deeply grateful.

And to those who stand at the center of the abuse and still manage to get up every morning, fight back, AND create amazing amazing work?

This type of behavior continues to plague the comic book industry with no end in sight.