A new report indicates that Sony Pictures’ upcoming Venom film starring Tom Hardy and Michelle Williams will not be rated R. Instead the studio has opted for a PG-13 rating of the film.

The report comes out of ComicBook.com where they cite AMC Theaters as the source of the rating.

They even provide a screenshot to verify their report: 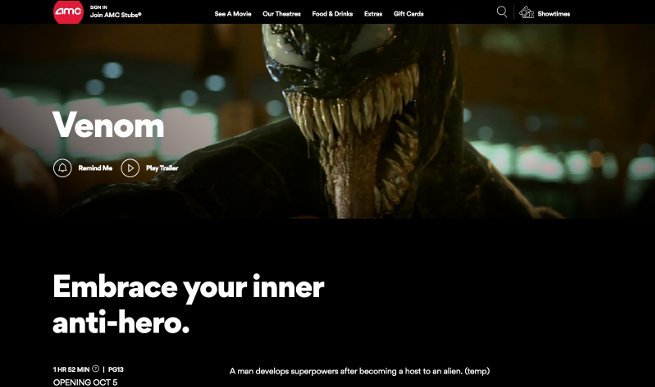 However, as of this rating the AMC Theaters website has been updated and there is no rating listed next to the film. 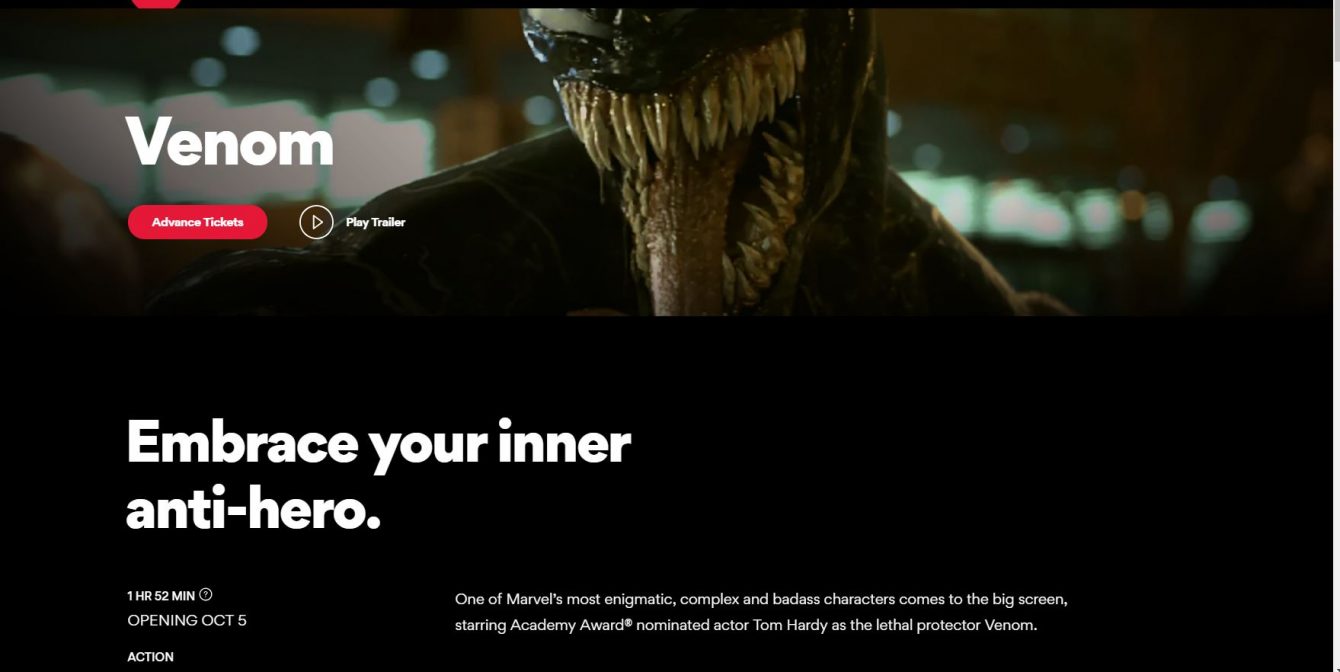 However, Fandango notes that Venom will be PG-13.

#Venom is rated PG-13, but the director is open to having an unrated home video release: https://t.co/dIG4Yk01pO pic.twitter.com/t5ym0iBOFC

One thing is clear is that both Fandango and AMC Theaters are reporting that the film’s runtime is 1 HR 52 MIN.

While it definitely appears that Venom will be PG-13 for its theatrical release, director Ruben Fleischer spoke with Fandango hinting that there could be an unrated version of the film available for home release.

While we might not be getting that R-rating that many fans would have loved to have seen, Flesicher did confirm the film will have a dark tone:

“When I set out to make the movie, I wanted to distinguish the film tonally, and I wanted to make a darker, grittier, kind of edgier comic book movie that also has a strong horror element, which is inherent to the character and the comic. Those were the aspects: darker, edgier, grittier. I think Tom Hardy embodies all of those qualities. The combination of Tom, Venom the character, and then the look of the film, which we really tried to make look, like I just said, edgy and gritty and dark and grounded of this world.”

He also noted the film will have at least one huge horror element: body hopping. He specifically points out that the symbiotes will be able to body hop and you never know when could pop-up.

“Yeah. I mean, one of the traits of a Symbiote is that they can jump between different hosts and can potentially go into anyone. That’s part of the film… you never quite know who or where they might turn up.”

Venom has a number of influences from both the comic books as well as on film. Fleischer elaborates on just what those are:

“As a comic book fan, I’ve seen all the comic book movies. I didn’t have to watch them specifically for this. I was more interested in the kind of classic ‘80s horror movies. American Werewolf in London was a big influence on me, just because of the experience of being taken over by another. You know, [David] Cronenberg and John Carpenter, I just love his classic horror movies. Aesthetically, the director of photography and I talked a lot about the look of those films. Those were probably the ones that come to mind first as far as the look and the feeling of the movie.”

He also confirms previous statements about the comic book storylines that influenced the film:

“Absolutely. The Lethal Protector is probably the best one to start with, just because it takes place when Eddie and Venom leave New York and head to San Francisco, where our movie takes place. And there is a subplot about homeless people that we embrace for our film, too. There’s a component of him being more of an antihero in that run of comics.”