CBR and Polygon writer Kieran Shiach, who has led numerous campaigns to try and get comic book professionals fired like Howard Chaykin and Ethan Van Sciver, launched a GoFundMe to allegedly stave off homelessness.

Hey, we have somewhat of a pressing emergency that could see us with nowhere to live in a month’s time.

If you have absolutely anything you can donate to help us through it, we’d be eternally in your debt. https://t.co/6VJYDL7M7b

Shiach’s GoFundMe explains why he is asking for money:

“Due to a mistake on the part of our letting agency, they haven’t been receiving our rent for the past three months. We’ve been working with them and the bank to get it sorted, but today received a court summons requiring us to pay the full amount owed, plus legal fees.

This wouldn’t be too much of a problem except that our landlord has decided to sell the house and we need to look for a new place to live as soon as possible, but no-one will accept an application from us until this is sorted.

£3000 is the full amount we need to pay everything off and get the letting agency — whose fault this is — off our back. We don’t expect to raise the full amount, but any help that you can provide during this stressful time would be greatly appreciated.”

Interestingly enough Ethan Van Sciver discovered that Shiach has been talking about his move for the past couple of weeks:

This is weird. Kieran Shiach said he knew he was going to have to move a month ago. So this isn’t an sudden “emergency” that has to do with disappearing rent money.

Interestingly, Kieran is headed to the THOUGHT BUBBLE convention this weekend. With what money??

And that wasn’t his only Tweet concerning the move. He notes he’s actually being viewing houses and how he needed to save up for a deposit for his new place.

We were supposed to go, but we’re being forced to move in November and need to save for deposit/first month/movers/etc.

We’re viewing a house tomorrow. I don’t want to move, but the decision is out of our hands. Hopefully everything goes smoothly and we can be in a new place as early as next month.

In fact, Shiach knew he had to move all the way at the beginning of August.

Just got word that our landlord is selling the house and we have to move at the end of November.

We just found out this week that we have to move, so we’re in hyper saving mode.

We’re not being forced to move for four months but I’ve started packing now because I’m getting a head start this time.

Shiach also has a history of asking for money from people online. YouTuber That Umbrella Guy breaks it down:

While Shiach has asked for money quite often, one of the biggest marks against him is his KickStarter partner Traci Shepard. Back in April, Shepard wrote on Tumblr:

“So how many of you never received the physical rewards for backing it at this point? Me too. It’s been about nine and a half months since the KS ended and as far as I know, there are still outstanding backer rewards that have never been fulfilled, I myself have never received a copy of my own book, and I still haven’t been paid my share of the money.”

“I’ve mostly been willing to defer final payment and wait until all the packages were shipped, so maybe part of that is on me, but I’ve been getting assurances of “next week” or “next month” since September, when I needed to cover some travel expenses and asked for help that was soundly ignored (resulting in me missing one of my friend’s wedding).”

She would provide an update stating that Shiach still hasn’t sent her what’s owed to her and she still hasn’t received the books.

–Update since then, he has sent me a chunk of the money, still no sign of the books. Some time after this, EVS contacted me about doing some art for whatever his scam is to stick it to Kieran, CGers got twisted up about me not taking a job neither I nor they wanted me to have.

Anyway I still have friends giving this dude Patreon money and accolades for fighting the good fight even after him disappearing a couple thousands worth of cash and merch so on this particular subject I am going to remain a little bitter.

Earlier in April, Shiach noted he would be buying a Nintendo Switch with his “first pay check from the big boy job.” 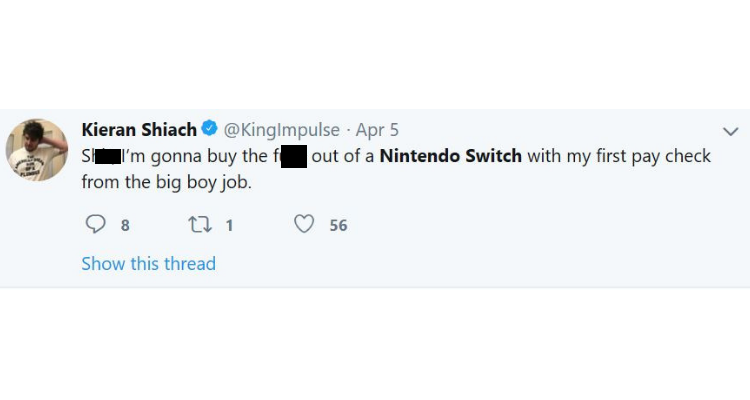 It’s unclear if he did buy the Switch, but he notes he’s excited for Assassin’s Creed coming to the platform.

Seeing lots of talk about AC coming to Switch which is exciting; Assassin’s Creed is one of my favourite game franchises.

He also appears to have a PlayStation 4 and has been playing the newly released Marvel’s Spider-Man. In fact, he claims he has reached 100% game progress.

I still have a few things to do to get platinum but I just hit 100% game progress on Spider-Man. pic.twitter.com/8tBVRp4MAl

He’s also posted a number of videos of him playing Marvel’s Spider-Man:

Shiach has also threatened violence against people he sees as his political opponents. He’s intimated he wants to execute people via guillotine and has noted he’s been “looking forward to Donald J. Trump’s death.”

Every day I wake up and hope that today is the day Donald Trump drops dead.

I gotta be right eventually.

the shared excitement and celebration over Roseanne’s cancellation has me looking forward to Donald J. Trump’s death even more.

I can’t wait to share that with all of you, my friends.

While Shiach has a track record of asking for money online as well as at least one major example of not fulfilling his KickStarter, not to mention the multiple campaigns and calls for violence, Ethan Van Sciver, who is a lead Comicsgate voice noted he would be willing to extend aid to Kieran.

One last thing about EVS before I go to bed. He’s a Trump supporter and when it comes down to it people that supported and continue to support his racist policies and racist initiatives are racists themselves.

You can’t say “I support Donald Trump but I’m not racist.”

If he humbly apologizes and promises to change his ways…

…if he gets off his lazy ass and gets a job…

…I will extend aid to Kieran Shiach. https://t.co/eQGjyjLooI

A number of people noted that they would be interested in helping Shiach, but he has them all blocked on Twitter.

I’d love to look into helping this young man but he has me blocked.

I’m with @EthanVanSciver on this. If he’ll do all the things EVS said in that post I WILL contribute– #ComicsGateCares, but we aren’t push-overs.

Since I’m currently blocked by him for whatever reason. I take that to mean he wants nothing to do with me. So, I think I’ll save any disposable income I have for someone that actually WANTS my support.

What do you think about Kieran’s latest fundraising campaign? Do you believe his story? Do you plan on helping him out?