Cain reported she had been working on the series for two years and had completed four of an expected six issues.

I’m incredibly proud of the 4 issues we’ve turned in so far. It’s been 2 years of work. And reflects tremendous effort by an incredibly talented team. It kills me that we won’t get to share them…Forgive me, Viv. https://t.co/wGj65AFDZv

In a rather candid interview with The Daily Beast, Cain didn’t hold back with her criticism of Marvel Comics.

Cain discusses what Marvel wanted from her after The Vision was canceled,”They wanted it to be clean and quiet, with the implication—not even—with the understanding that they had more projects for me in the future if we could keep this clean and not make anybody look bad.”

Cain then goes on to express how much she didn’t like being told not to talk about the cancellation: 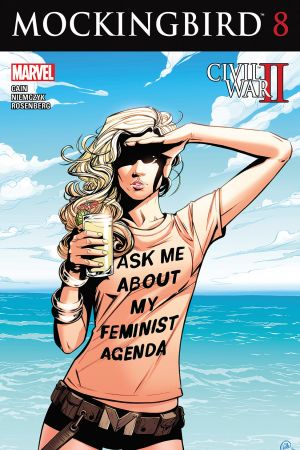 Cain would go on to detail her relationship with Marvel Comics as it stands:

“Yeah, I’m dead to them. Trust me. I guess there is that freedom of being like, well, I don’t have to worry about that anymore!”

She would elaborate that her experience with Marvel Comics is not uncommon among her friends who work in comics:

“I have so many friends who work in comics who this kind of stuff happens to in one form or another, not uncommonly, and nobody can speak up.

They’re always told what messages they can share and the things that they’re supposed to lie about. And you have to do it because otherwise, you won’t have the next job. And it’s not just Marvel Comics, it’s a freelancer economy, in a way I think that most people do not understand.”

Chelsea Cain would go on to reveal why she thinks her The Vision book was canceled:

“I don’t think that it was part of some kind of like, sexist conspiracy. I think it was some really smart, funny, friendly boys in a room making a decision and it never occurred to them that this was important, or that these kinds of comics needed a place.”

She goes onto describe Marvel’s decision to can her title as “institutional complacency.”

“It’s just that kind of institutional complacency in the way that decisions get made and don’t get made. And that’s what we have to chip away at. It’s the only way to change it, to just keep calling them out.”

Cain then expressed how she feels now that Marvel canceled her Vision series:

“I feel really freed now. I have no censor function anymore.”