Tom King is an ex-C.I.A. agent. That in itself is not only impressive as hell on a resume but also gives you an idea of where he might be coming from with his stories, so the idea that superheroes can suffer from PTSD makes sense, and isn’t actually far-fetched at all. Heroes in Crisis opens with the idea that the heroes have a safe place called “Sanctuary” that they go to to get help when they need counseling after traumatic events. Naturally, something goes terribly wrong (because let’s face it, there’d be no story if everything was fine) and lots of what appears to be C-list heroes die. Batman, Superman, and Wonder Woman go to investigate while Booster Gold and Harley Quinn have a talk and then a fight, in which Booster Gold shows that he’s a complete moron a couple times over. 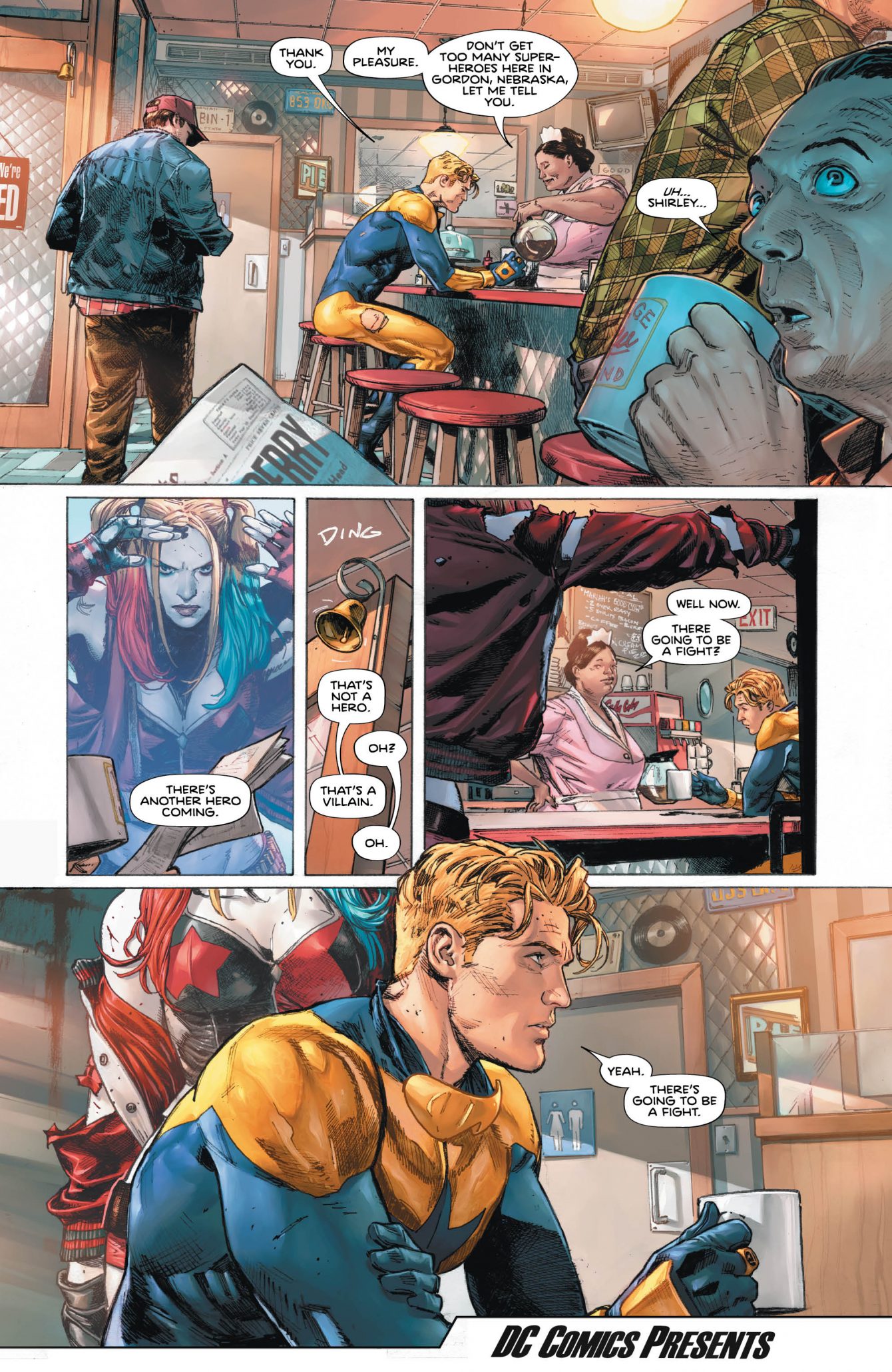 Apparently Booster and Harley were at Sanctuary when the tragedy occurred, so they’re our main witnesses and here’s where I start having trouble with the story. First of all, no matter how many times DC does it, Booster Gold is never going to be an A-List hero. He’s not that interesting. So, they paired him up with Harley Quinn (cards on the table, I hate Harley Quinn) because she sells a lot of books and is pretty much the DC answer to Deadpool.
The issue left me with a lot of questions, the big one being “Why would Harley Quinn be at Sanctuary to begin with?” She’s a bad guy, right? If she’s there why haven’t they brought in the Joker, or Kite Man (who Tom King made into a great character) or anybody else? It just seems like the answer is that people will buy a book that has Harley Quinn in it and maybe Booster will rub off on fans.
I know this is some harsh criticism for this book and let me back pedal by saying that if anyone can answer these questions in a satisfactory manor, I have no doubt, it’s Tom King. This issue is the definition of a first issue, it’s the beginning of a beginning, and with eight more issues to go I’m sure Tom King has a plan. Without spoiling everything, I can only say that I hope the people that died in this issue didn’t do it in vain. 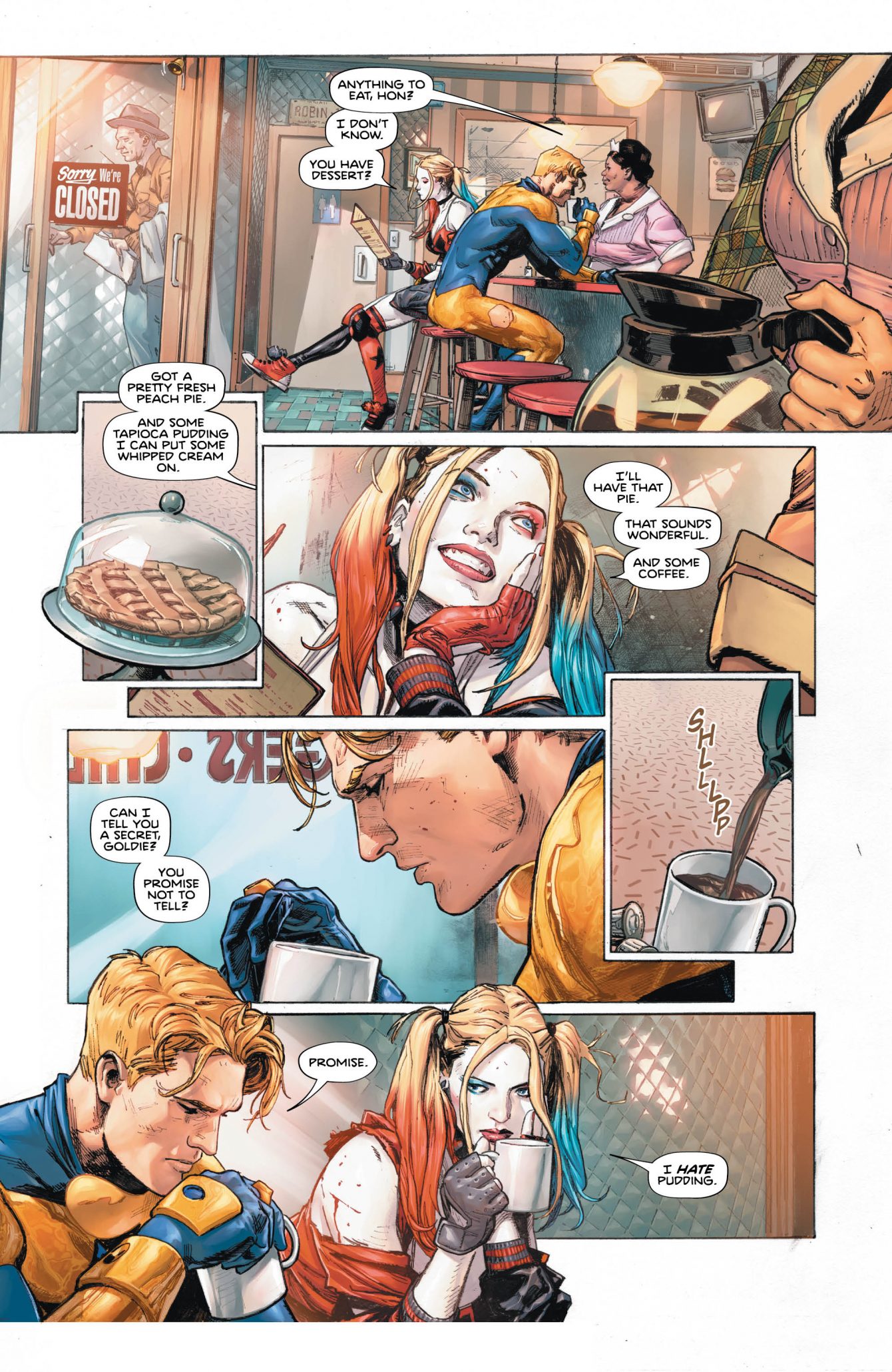 The art by Clay Mann is beautiful. There’s no way around it. Set in the middle of sunny Nebraska, Mann makes everything look bright in a very dark story. His facial expressions are some of the best on the printed page in a while, and he doesn’t slack off on backgrounds and non-speaking characters either. One page in particular that I really liked was page 17, where you see how/what Superman sees from up in the sky.

If this were a one shot leading into a company-wide crossover event, I’m not sure I’d like it very much.With the knowledge that this series is nine issues long and contains three acts, it’s easier to trust the author to slowly build up the story and not jump the gun. The art’s great and lord knows you have enough variant covers to choose from, but Tom King has proven to me time and time again he knows what he’s doing (especially with the Batman/Catwoman wedding story line), so it would take something serious for me to doubt him here.
Comic Book Review: Heroes In Crisis #1
Pros
Cons
2018-09-26
7Overall Score
Reader Rating: (4 Votes)
0.2