You can listen to the video below.

Rachel Butera who voices Leia in Star Wars: Resistance has released a video of herself mocking the voice of Dr. Ford on twitter. #KavanaughHearings pic.twitter.com/drhdIXqZh2

Ford is at the center of accusations surrounding President Donald J. Trump’s Supreme Court nominee Brett Kavanaugh. Ford accused Kavanaugh of pinning her to a bed, covering her mouth, and trying to remove her clothes at a party in 1982.

Ford would testify at the Senate Judiciary Committee stating, “Brett groped me and tried to take off my clothes.” She added, “This was what terrified me the most and has had the most lasting impact on my life. It was hard for me to breathe and I thought Brett was accidentally going to kill me.”

However, according to Time, two other men claim to be the ones who were responsible for the encounter with Ford.

But people piled on against and Butera and there were even calls for her to be fired from her role in Star Wars.

Carrie Fisher would roast Rachel Butera alive for mocking Christine Blasey Ford. Rachel Butera is no Leia for me. I hope she's replaced.

@DisneyChannel PLEASE FIRE Rachel Butera from Star Wars Resistance! She is Not the person to voice General Leia Organa! Mocking someone's voice like that is SO NOT COOL…Specially someone that works for Disney! Do you really want to be associated with someone like Ms Butera??

Hey @disney where is your zero tolerance at now. Waiting for you terminate your business relationship with Rachel Butera after the tasteless jokes she made today. Not gonna hold my breath though.#disneylovesnazis#RehireJamesGunn

@starwars @Disney Fire Rachel Butera. This should be a no-brainer for you. #StarWarsResistance https://t.co/FYF0W7z66f

Not watching unless she is recast. This is unacceptable. And cruel.

While tons of people were calling for Rachel Butera others noted they won’t be tuning into the show anymore.

I'm a lifelong Star Wars fan–since 1977. Guess what? Our house won't be tuning in for Resistance. It's a shame, too. #RachelButera #whatwouldleiado

Rachel Butera doesn't deserve to be within a mile of Princess Leia and I wont support anything with her in it. You endorsed her but she really went and ruined her chances in this fandom after.

This is a disgusting tweet. You can forget my family’s attendance at any Disney-associated movie or theme park as long as @RachelAButera is employed in any capacity worth your corporation. #RachelButera

One person even claimed that the entire female gender has disavowed Butera.

Dear twitter and free world. I would like ur attention for a moment to announce that on behalf of the women gender we no longer claim Rachel Butera as one of us. Men, she’s your embarrassment now https://t.co/Sg3kRPKIKt

While some might find Butera’s mocking of Ford despicable. It’s nothing compared to what Star Wars writer Chuck Wendig or director Rian Johnson have called actual Star Wars fans. Wendig launched an expletive tirade where he referred to Star Wars fans as white supremacists. Johnson decided to not only blame the criticism he received for The Last Jedi on fans, but he also described them as manbabies. Their comments were definitely part of the reason why Solo: A Star Wars Story absolutely bombed at the box office. Yet, Star Wars and Lucasfilm has done nothing to them.

Butera merely mocked a woman, whose story is highly skeptical and appears to be politically motivated especially due to the timing of the allegation.

And while all of these people are calling for Butera’s head, none of them are calling out Patton Oswalt for his expletive laced Tweet against Lindsey Graham. 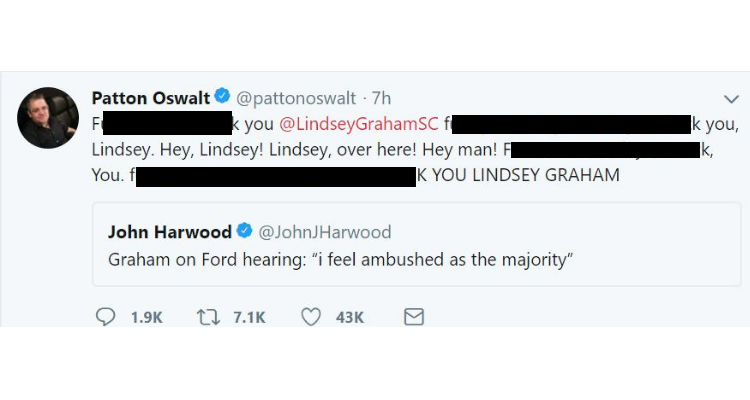 There aren’t numerous articles condemning or calling for the firing of the numerous Twitter users with blue check marks who insulted Brett Kavanaugh. 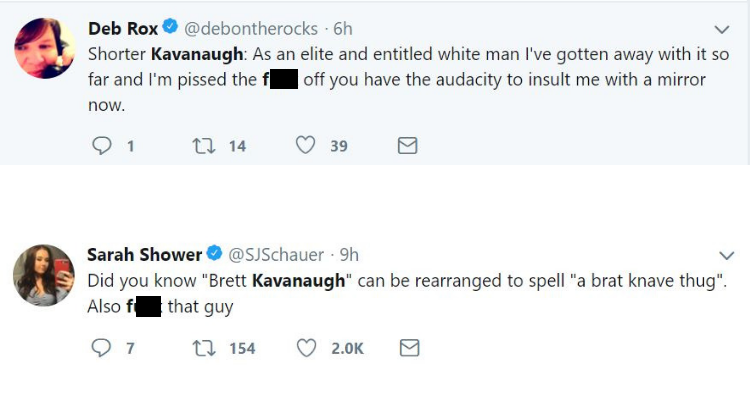 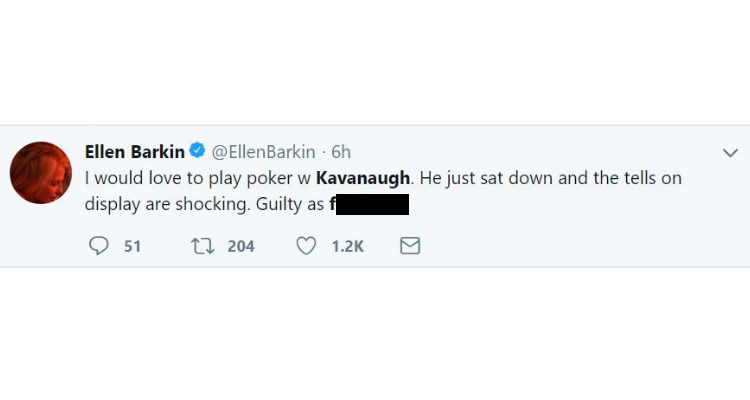 If Disney does in fact fire Butera over mocking Ford, it will further damage the companies brand among conservatives. Many will see them as a full on political company, that is no longer interested in creating actual entertainment. Even if Butera herself doesn’t like Trump.

Rachel Butera has apologised for her video adding that she was ‘just imitating a voice’. Earlier this year Rachel Butera said that ‘people only apologise to save their careers’. pic.twitter.com/CKLSpOLj23