Butera, who will give voice to Leia Organa, ran a humorous Twitter account. A Twitter account where she even made fun of Dr. Christine Blasey Ford after she testified in front of the Senate Judiciary Committee against President Donald Trump’s Supreme Court nominee Brett Kavanaugh.

Butera first locked down her Twitter account, then eventually deleted it. It’s unclear, why she deleted her account, but a random Star Wars account noted it was due to the incessant and constant harassment she experienced at the hands of Star Wars fans after she made a funny video about Ford.

While, one random Star Wars account does not a solid source make, we can’t say for sure whether or not Butera actually deleted her Twitter account because of the harassment. But we do know there’s been some pretty vicious sexism directed at Butera personally.

Amanda Ward from Making Star Wars wrote, “Hey Star Wars Disney, I’d be happy with literally ANYONE redoing the voice work for Leia before the 7th. Just replace her lines with Wookiee growls or cut her entirely. I’m fine. Leia means so much to us, and I can’t watch her in Resistance voiced by Rachel Butera.”

Deputy Editor of i09 Jill Pantozzi would call out Butera as well, “You’re the voice of General Leia on Star Wars Resistance and you’re using your platform to mock a woman who is baring her soul about a sexual assault in front of the country. Shame on you. Carrie Fisher would be appalled.”

One Twitter user even announced that Butera was no longer part of the “women gender.”

Dear twitter and free world. I would like ur attention for a moment to announce that on behalf of the women gender we no longer claim Rachel Butera as one of us. Men, she’s your embarrassment now https://t.co/Sg3kRPKIKt

After word spread about Butera deleting her Twitter, some Twitter accounts began to state it didn’t matter because the internet is forever.

Delete all you want, Rachel. The internet is forever. And Leia Organa WOULD NEVER. https://t.co/PVQcll8DP7

Back in August, Butera announced she had the honor of voicing Leia Organa in Star Wars Resistance:

“I can finally announce that I have the incomprehensible honor of voicing the role of Leia Organa in the new Star Wars Resistance out this October. Thank you CESDTalent DisneyLucasfilm Stern Show + Carrie Fisher.” 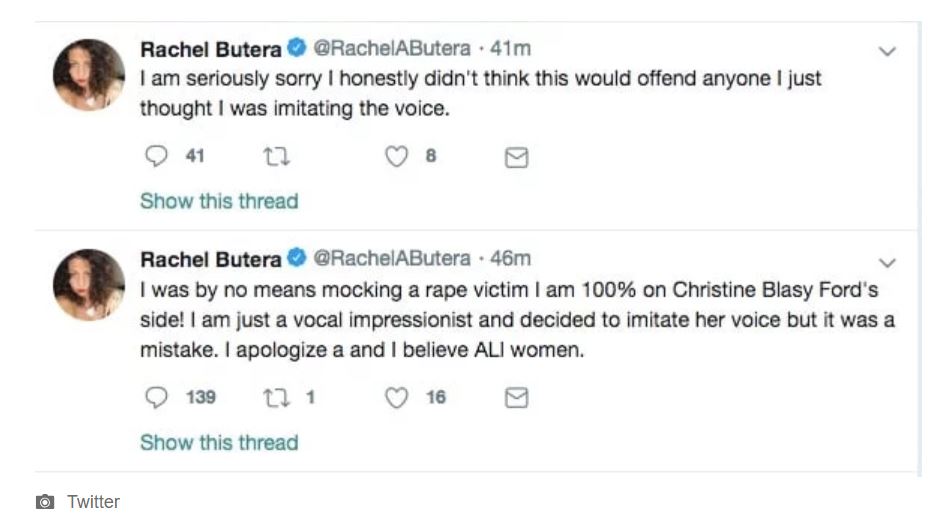 However, this wouldn’t stop the haters.

That video was awful. Tone deaf, crass, disgusting. Butera deserves the backlash she's getting, and I SINCERELY hope Disney and Lucasfilm are in the process of recasting because the video was so much more cruel than Butera's apology would lead you to believe.

@starwars This is utterly despicable that someone who is supposed to be voicing a character who is the embodiment of Feminism, is MOCKING a survivor. This is disgusting and Rachel Butera's apology was not enough. Action must be taken. This is wrong. Carrie deserves so much better https://t.co/URZhylqq9C

Everyone in the Star Wars fandom and every single survivor in reaction to Rachel Butera's apology for that video. pic.twitter.com/BIOLLo0Ylg

Rachel Butera was fully aware of what she was doing in that video. So, I don’t want to hear any type of apology from her. She knows what poor taste is…