Star Wars writer Chuck Wendig is back to his old ways, but this time he’s calling for violence against Trump supporters and those who oppose his own political beliefs.

Wendig isn’t a stranger to these long-winded, crazed rants. He previously has called Star Wars fans “white supremacists.” He’s threatened to sue people over a parody shirt. He would then go on a profanity-laced rant decrying Star Wars fans claiming they come from a “poisoned, septic well-spring.” He would then describe the well spring as “toxic masculinity and white privilege.” He would even make the bizarre claim that as a write he doesn’t make products.

But his latest meltdown is the worse as he actually calls for violence and harassment of Trump supporters.

First, Wendig would claim there would be calls for civility, but he wants people to ignore them. (Archive link: http://archive.fo/dRp6M)

There will be renewed calls for civility. Ignore them. They ask for civility as a way for you to grant them complicity in what they do.

Civility is for normalcy. When things are normal and working as intended, civility is part of maintaining balance. But when that balance is gone, civility does not help return it but rather, destabilize it further. Because your civility gives them cover for evil.

Wendig would claim his call for incivility was not a call for violence.

Note: this isn’t the same as calling for violence. But it is suggesting that you should not be shamed for using vigorous, vulgar language. Or for standing up in disobedience. Or for demanding acknowledgement and action in whatever way you must. 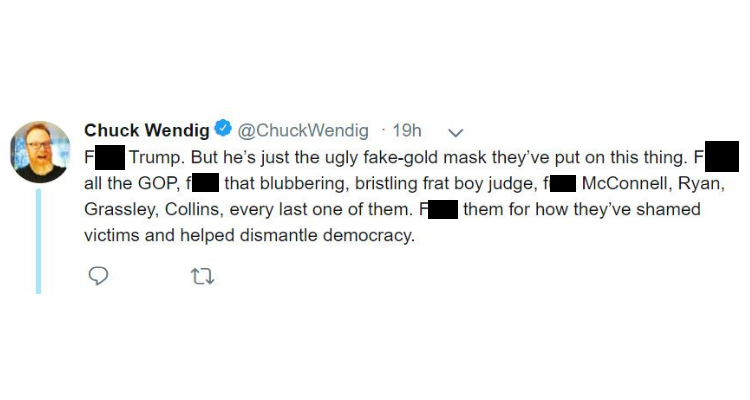 They will tell you to smile, that we need to get back to business, that we gotta heal the rift and blah blah blah — but that’s the desire of a savvy bully, who wants you to stop crying after he hit you, who wants you not to fight back. But you can cry. And you can fight back.

However, he would quickly shift his tune in a number of Tweets that he has now deleted. In fact, he would call for Trump supporters to “eat a boot covered in shit.” It’s obvious he is calling for Trump supporters to be smashed in the face with a boot covered in shit. He’s not fooling anyone. Wendig might claim he’s not calling for violence, but it’s exactly what he’s doing.

He would even reference Game of Thrones by stating “winter is coming.” If you aren’t familiar with that reference, it refers to a number of zombies coming south to kill everyone. If those aren’t calls for violence I don’t know what are.

He would even describe Trump supporters as “callous f***necks.” But that wouldn’t be at all. He described them as “prolapsed assholes,” “grotesque monsters,” “racists,” “wretched abusers,” and “vengeful petty horrors.” 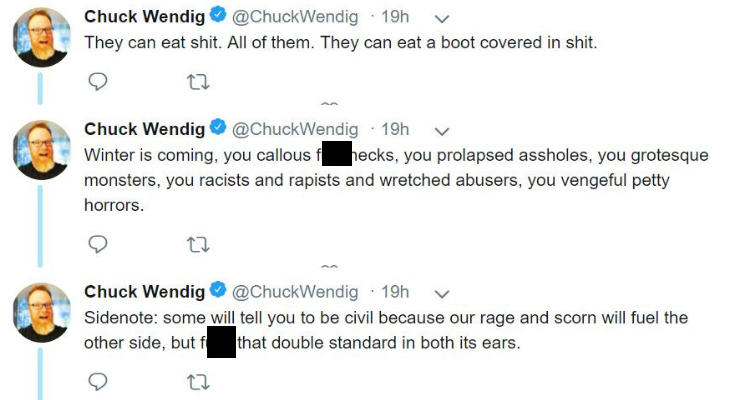 He would then devolve into what I can only describe as lunacy as he starts ranting about eating a baby, and then claiming Trump supporters are eating a baby.

Wendig would then claim he has some dead bodies he needs to bury.

MONDAY. The world is strange, gone mad, and we need you. We need your heart, your fight, your spirit. We need your voice, your ideas, your love. We need the fire you breathe, the passion in your blood, also I need to borrow your truck and a shovel because I have some bodies here

This is the type of person that Disney wants representing their Star Wars brand. They want someone who calls for violence and wants people to smash boots covered in shit into the President of the United States’ supporters’ faces. It’s absolutely sickening.

What do you make of Chuck Wendig’s comments?