Twitter suspended Tim Wellens after he wrote a poem about killing a fictional alien species, the Thargoids, which appear as antagonists in the [easyazon_link identifier=”B0725QSF78″ locale=”US” tag=”boundingintocomics-20″]Elite Dangerous[/easyazon_link] game.

Wellens was suspended following his poem in response to Elite Dangerous’ own poem.

Roses are red,
Violets are blue,
Thargoid or foe,
I will come to kill you o7 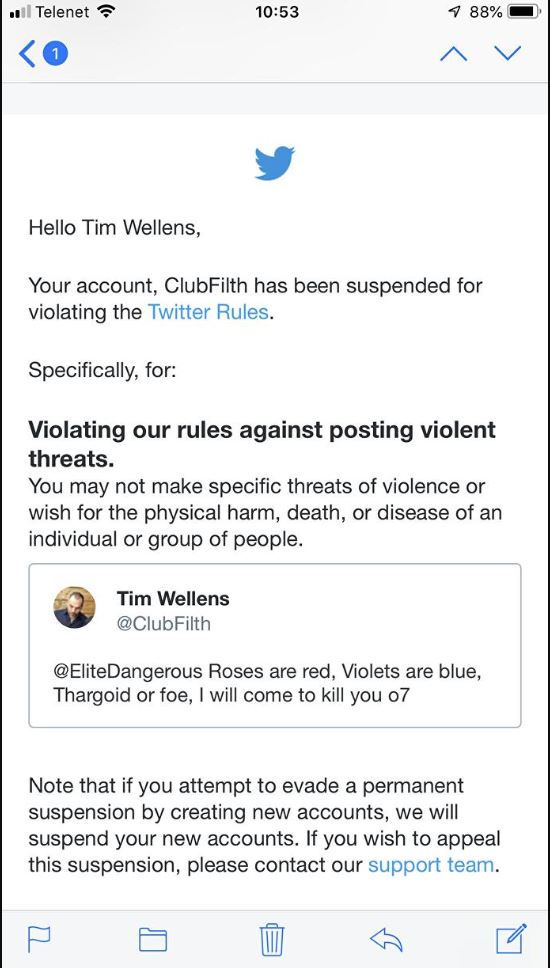 According to Eurogamer, Wellens attempted to appeal the decision.

“I explained that Elite is a space game and that thargoids are a fictional alien species in a game, and that I never ever threatened a real person or organisation on Twitter.”

He added, “Thargoid or foe, I’m coming to kill you, was directed to the thargoids and enemies in game.” 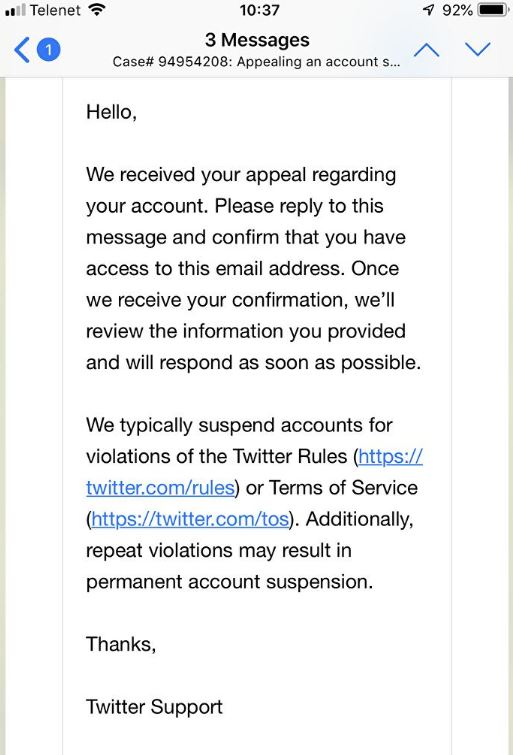 The appeal seemed to fall on deaf ears.

Wellens explained his frustration, “In the beginning I was very angry as I follow a lot of friends who I’ve known for a long time. ”

“What hurts me the most however is the fact that I feel I’m judged by a computer, and I have no means to defend myself. It’s like fighting an A.I. I understand they have to use software to root out ugly tweets, but I was hoping a human being would do the investigation. It would have only taken them five seconds to see that my tweet was completely harmless – and I have seen much more violent tweets than mine.”

He even gets in a Donald Trump reference:

“Trump even threatened Korea with fire and death.”

1/6 I’m free again,at last! I want to thank everyone for their MASSIVE support! Masses of tweets/retweets/mentions! For the full story regarding my ban : https://t.co/TaRJ4gqill or https://t.co/otf97F39sM or for Japanese : https://t.co/0Dr9Vml122 …Yes it got out of hand ?

6/6 But we still need all help we can get to free another banned CMDR, @DJTruthsayer !! For him the ban has alot more consequences than for me,so please let’s rock this boat!! Love you all and sorry I can’t respond to everybody individually ❤️? o7

However, Wellens ban is quite concerning as Wellens points out it appears that an AI made the ban and doesn’t have any context as to what he is referring to. It’s even more concerning when Wellens, who is merely talking about a fictional alien species in a video game is nearly perma-banned while you can surf all along the platform and find plenty of examples of certain groups lobbing threats of violence against people all of the time. What does Twitter do? Crickets.

Twitter has had a long and complicated history with censorship. They’ve allowed groups who call for political violence to continue to use their platform, but if you are just a gamer trying to kill some fictional aliens you could get the ban hammer.

All of this has to make one wonder is Twitter safe for other users? Could a joke about killing someone in Call of Duty Black Ops 4 lead to a ban? Because at this point it seems that one joke is all it takes.