X-Men director Bryan Singer took to Instagram to denounce an upcoming Esquire article which is expected to rehash old accusations of sexual misconduct.

“I have known for some time that Esquire magazine may publish a negative article about me. They have contacted my friends, colleagues, and people I don’t even know. In today’s climate where people’s careers are being harmed by mere accusations, what Esquire is attempting to do is a reckless disregard for the truth, making assumptions that are fictional and irresponsible.

This article will attempt to rehash false accusations and bogus lawsuits. http://bit.ly/exampleboguslawsuit (link in bio). This article will misuse quotes from “sources” that will claim to have “intimate” knowledge of my personal life. It will also attempt to establish guilt by association simply because of people I’ve either known or met in the past. They will be attempting to tarnish a career I’ve spent 25 years to build.

Incidentally, this article has been conveniently timed with the release of my film, Bohemian Rhapsody. I am immensely round of this film and everyone involved.

Singer has been accused of sexual misconduct for years. He was most recently sued by Cesar Sanchez-Guzman, who claims he raped him when he was 17-years old in 2003. Singer denied Sanchez-Guzman’s claims in a statement:

“Bryan categorically denies these allegations and will vehemently defend this lawsuit to the very end. Cesar Sanchez-Guzman apparently claims that he did not remember this alleged incident from 2003 until now. Significantly, when Sanchez-Guzman filed for bankruptcy only a few years ago, he failed to disclose this alleged claim when he was supposed to identify all of his assets, but conveniently, now that the bankruptcy court discharged all of his debts, he is able to recall the alleged events.”

Sanchez-Guzman isn’t the only one to accuse Singer. Michael Egan claimed Singer tried to force him to have sex at parties in California and Hawaii. However, Singer submitted evidence showing he wasn’t even in Hawaii at the time Egan claimed he was. Egan would eventually drop the lawsuit and plead guilty to securities and wire fraud in 2015.

The same lawyer who represented Egan also filed a lawsuit against Singer representing another client. That lawsuit was dismissed because it was improper and there was no legal basis for it.

To be clear, the director has not been found guilty of any wrongdoing. However, there have been numerous allegations made against him, but many of them have been thrown out or been disproved.

Singer points out that he believes Esquire is specifically trying to target his livelihood as a Hollywood director with the timing of the article expected to drop when his upcoming biopic on Queen, Bohemian Rhapsody hits theaters. Singer was the director of the film before he had to step aside to “put my health and the health of my loved ones first.” Reports indicated that there was a falling out between Singer and star Rami Malek, but Singer denied those allegations. Singer would eventually return to the project and oversee and assist in editing the film.

Despite Singer never being found guilty of any kind of sexual misconduct and disproving one of the claims with hard evidence, a number of “journalists” and writers from Screenrant to The Playlist expressed their savage anger towards Singer for defending himself from another article that is expected to rehash old accusations.

The multiple accusations against Bryan Singer, as well as his perpetual bad behaviour on sets, have been as well-known in the industry as anything related to Harvey Weinstein. There are a lot of complicit people keeping him afloat.

I take relief in seeing more of my colleagues in the industry talking about this and calling out the obvious bullshit, something that was almost never done only a year prior. But we need to keep this up because it’s obvious the industry wants everyone to roll over and forget.

And here we go! Heard about this Bryan Singer piece Esquire is working on over the weekend. Heard it’s also not a regurgitation of old stuff. The idea Singer is now trying to take credit for Bohemian is almost laughable considering he was basically fired for not doing his job. pic.twitter.com/o9wm76OVY2

Bryan Singer is attempting to get ahead of the impending Esquire story and save the press cycle around BOHEMIAN RHAPSODY despite 21+ years of continuous allegations of abuse, from a 14-year-old extra in APT PUPIL in 1997 to a 2017 sexual assault lawsuit: https://t.co/zzhcStsPgn pic.twitter.com/GfaIhVNKNz

Associate editor of SyFy Fangrrls and co-host of Trends like These Courtney Enlow had two choice words for Singer. 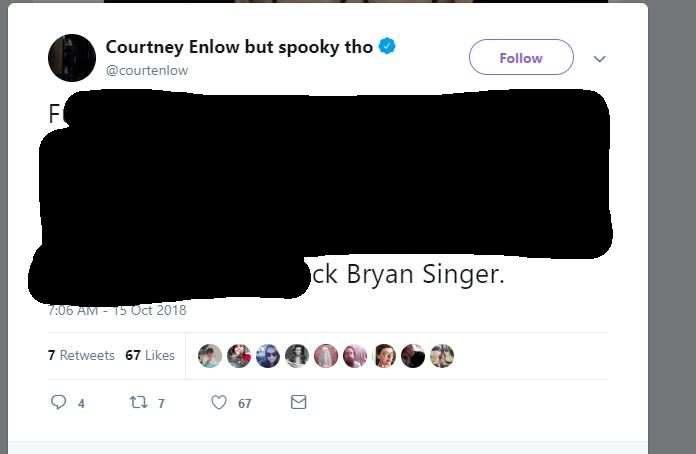 Senior editor at Collider Matt Goldberg insinuated that Singer is guilty by asking how much he spent on lawyers and PR to prevent charges.

How much do you think Bryan Singer has spent on lawyers and PR people to insulate him from these charges over the years? https://t.co/0kBh52rpZc

Bryan Singer has yet to be charged with a crime or even convicted. But that hasn’t stopped many of the people who work at websites that cover the entertainment industry from already insinuating that he’s guilty.

What do you make of Singer’s statement? Do you think this is a media hit against Bryan Singer?