Wherein We Systematically Tear Down All the Work Neil Gaiman Left Us With, In Favor of an Unreasonably Unlikeable Character Who Has a Chip on Her Shoulder for No Discernable Reason.

Here’s where we pick up the story. As someone who loves Neil Gaiman’s run on [easyazon_link identifier=”1401225756″ locale=”US” tag=”boundingintocomics-20″]The Sandman[/easyazon_link], I know most of these characters. The DC writers who have used the denizens of the Dreaming have done a good job over the years since Gaiman left at keeping everybody at least true to character. So I was more than a little distressed, even knowing going into this what Simon Spurrier was doing, that the Dreaming was in tatters and everybody was acting out of character. The idea behind [easyazon_link identifier=”B07FMNKNX4″ locale=”US” tag=”boundingintocomics-20″]The Dreaming #1[/easyazon_link] was to completely take apart everything Neil Gaiman left after his exit from his long-running Sandman series and to rebuild it with something new. The series writer Simon Spurrier even received Gaiman’s blessing to do it. It was a very classy move on his part, considering he was under no obligation to ask Gaiman’s permission. 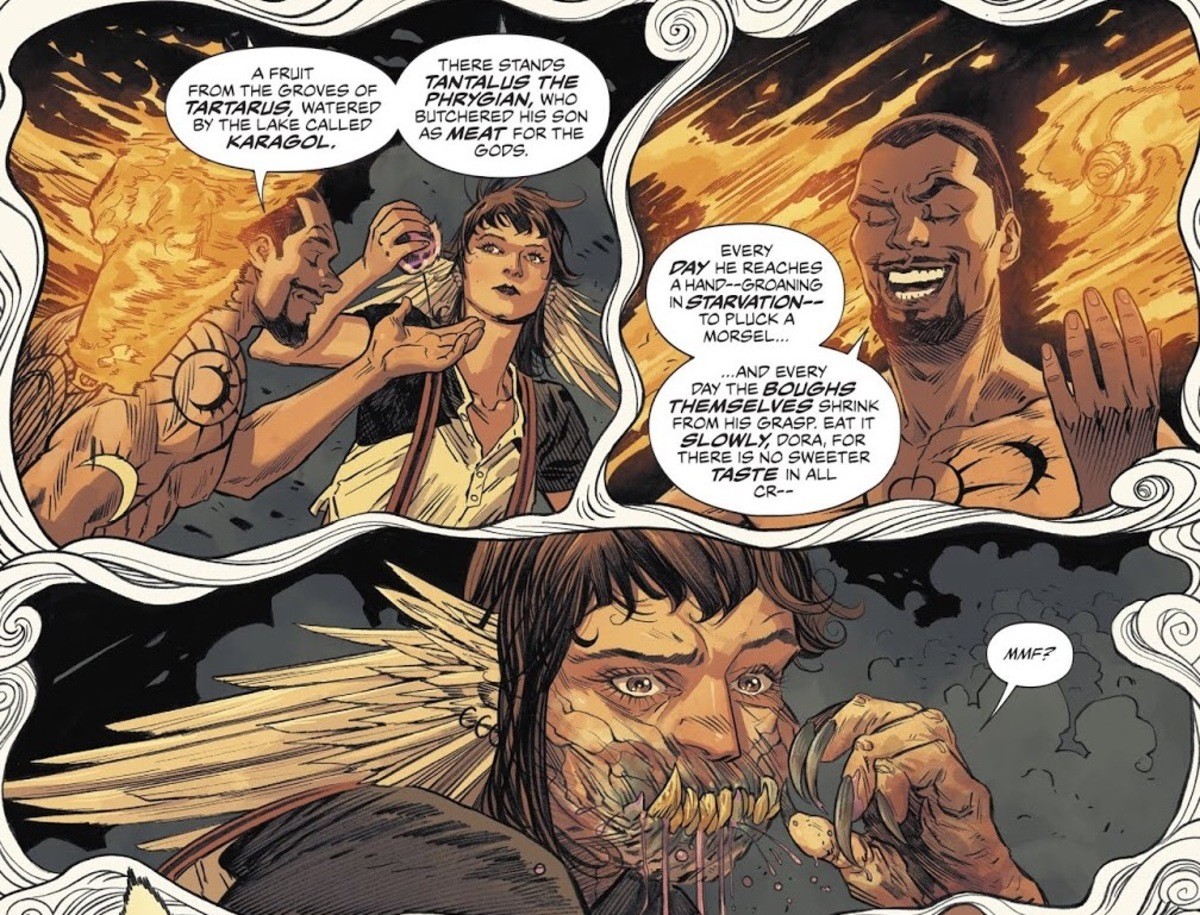 But, Here’s the Problem!

There are two problems with Spurrier’s execution of this series. First, he doesn’t go far enough with the tear down. This may change as it’s only the first issue but if you’re going to rip up the establishment in favor of something new, you want to get to it quickly so that you can concentrate on the rebuild. Secondly, the main character Dora Monstress is so repugnant that she’s insanely difficult to identify with. She’s vicious and self-centered. She doesn’t think before she speaks or acts. In fact, her actions in this story put innocent characters in real danger and she barely gives it a second thought.

Oh Wait, Forgot About the Plot.

The biggest sin a writer can commit is to not entertain. The plot of The Dreaming #1 is just boring. We’ve seen the whole destruction and deterioration of the Dreaming before. Bill Willingham did the whole; our wonderful sanctuary is being invaded by awful impossible homogeneous characters, far better in his [easyazon_link identifier=”140123755X” locale=”US” tag=”boundingintocomics-20″]Fables[/easyazon_link] series. Even the scenes with Matthew the Raven are just dull. The only interesting things that happen in this story directly involve Dora. Considering the cast of characters Spurrier has to play with, that’s just inexcusably bad writing.

The whole point of the Dreaming is that it’s supposed to offer a peek behind the curtain of a place where everybody resides for a few hours every day. The Endless are anthropomorphic representations of universal ideas, and their various realms should reflect that. The Dreaming is populated by creatures that perform a specific function to keep the realm working. When those creatures are jumped out of their bailiwick, the clockworks break down and it has a drastic effect on everybody in the entire world. I don’t think Spurrier gets that. 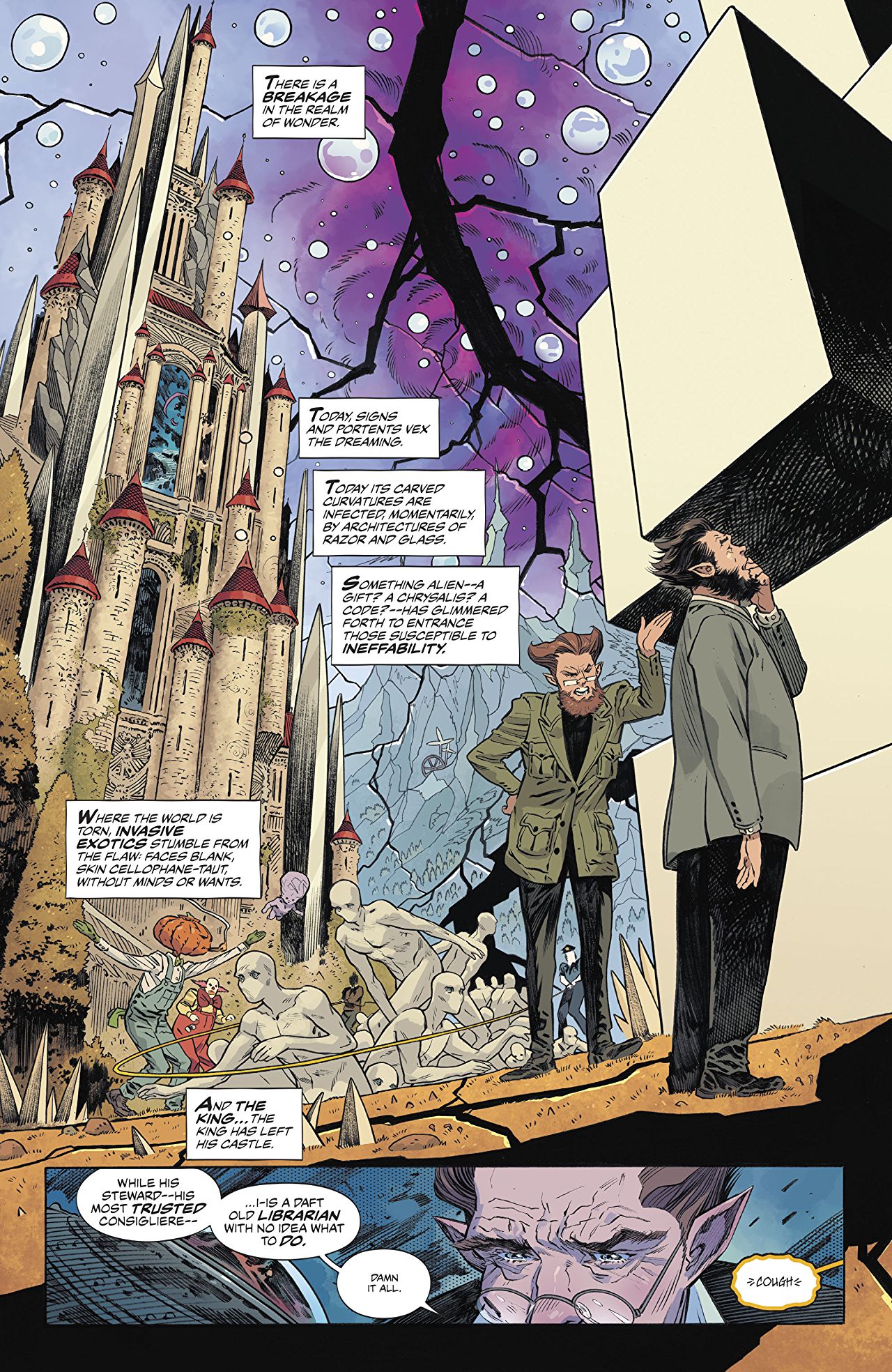 Bilquis Evely To the Rescue!

The art for The Dreaming #1 is by the insanely talented Bilquis Evely and she is the only thing that keeps this story from slipping into forgettable crap. Her character designs are fantastic. Her backgrounds are luscious and full of detail, and she renders all of the supporting characters consistently, and beautifully. Evely’s art is a treasure not to be missed, and it’s the only reason I’m buying issue #2. Well… that and my insane need to suffer through bad storytelling so you all don’t have to.

[easyazon_link identifier=”B07FMNKNX4″ locale=”US” tag=”boundingintocomics-20″]The Dreaming #1[/easyazon_link] may improve over time. It’s possible that Spurrier may get a handle on these characters. It’s only issue #1 so the plot might pick up. He may just be spooling things out slowly with nothing terribly interesting for anybody but Dora to do in the meantime. This is definitely not a recommendation for the story, but if you’re a fan of the artist, you can at least enjoy the pretty pictures. Give this a pass for now. It may be a lot better in the collected edition.