President Trump declared the signatures of the election in Arizona didn’t match and he questioned whether there should be a new election for the Senate race between Martha McSally and Krysten Sinema.

Just out — in Arizona, SIGNATURES DON’T MATCH. Electoral corruption – Call for a new Election? We must protect our Democracy!

The DC Universe twitter account decided to weigh in on this Tweet with some hateful language. They declared President Trump and his administration corrupt and then proceeded to call him a “dumb f***.” 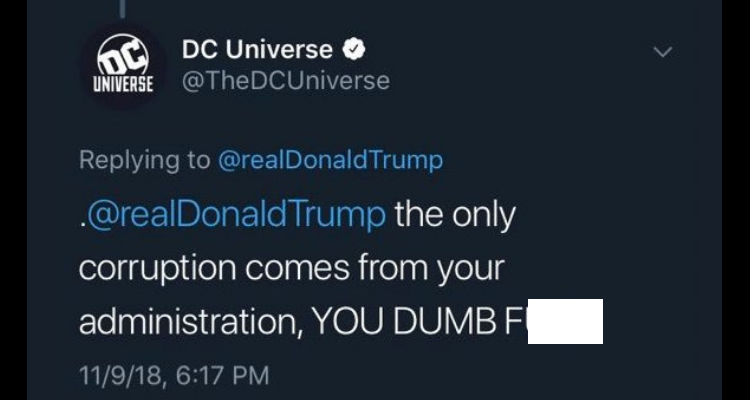 For those unfamiliar with DC Universe, it’s Warner Bros. and DC Comics’ latest streaming service specifically focused on DC Comics entertainment including movies, TV, and comics. The service currently has an extensive list of older DC Comics based films and television programming and is the home of new original content like Titans. In the coming months the streaming service will also feature more original content in an animated Harley Quinn show, a new season of Young Justice, a Swamp Thing live-action show, Doom Patrol, and Stargirl.

Former Superman actor Dean Cain responded to the DC Universe’s Tweet indicating someone should be fired.

If that’s a real tweet, it’s disgusting, and people should be fired.

It doesn’t appear that DC Comics, Warner Bros., or AT&T have made an official statement regarding the Tweet.