Cannon’s defense of Hart came just a day after Hart stepped down from the Oscar’s after The Guardian’s Benjamin Lee decided to resurface a number of old jokes in order to force him to quit or be fired from hosting the Oscar’s.

Lee would clearly advocate for the removal of Kevin Hart from the Oscar’s by writing, “Hiring Hart is an indicative misstep that highlights how homophobia, casual or blatant, is still de-prioritised in comparison with other discriminatory belief systems.” He would add, “If the Academy wants to progress and remain relevant, handpicking a man with a history of homophobia is a flashing red siren of an issue, a middle finger up to the LGBT community and a sign that Oscars might no longer be quite as white but they remain aggressively straight.”

While Lee targeted Kevin Hart, Cannon used the opportunity to point out other comedians who have made “homophobic” jokes in the past. He would also point out that no one was making a fuss about about Chelsea Handler, Sarah Silverman, and Amy Schumer’s jokes or trying to get them fired from high profile gigs. In fact, Sarah Silverman just had a major role in Disney’s Ralph Breaks the Internet. There was no furor about her past jokes.

Cannon first pointed out Chelsea Handler, he questioned, “I wonder if there was any backlash,” to her Tweet from June 12, 2010.  Cannon’s questioning about a potential backlash against Handler is right on point as people like Benjamin Lee at The Guardian can be quite inconsistent in their moral outrage.

After Chelsea Handler, Cannon pointed out Ralph Breaks the Internet voice actress Sarah Silverman’s past jokes. Cannon expressed his love for Wreck it Ralph, but he clearly was trying to point out a double standard to how the media’s moral outrage dealt with Kevin Hart and how it deals with Sarah Silverman.

Silverman is known for her brand of raunchy comedy that at times many have found offensive. However, she has also shielded herself from almost any type of criticism whether comedy related or not by using the title of “comedian.”

Nick Cannon wasn’t going to stop at two. He then took aim at another comedian, Amy Schumer, for an old tweet that used the word f*g: 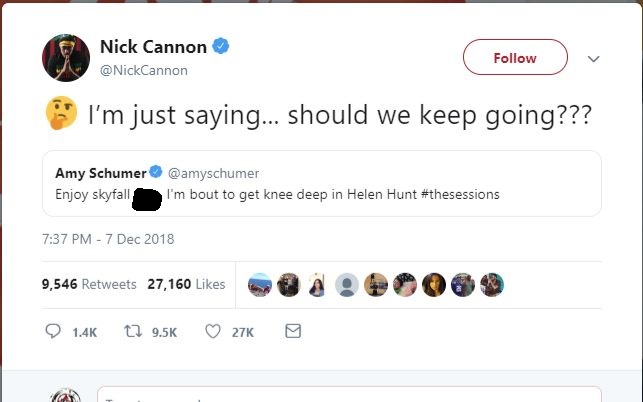 In his three Tweets, Cannon attempted to show that everyone has said or done stuff they might not be proud of. He also made it clear that double standards exist in our current culture of moral outrage.

Interestingly enough, Sarah Silverman recently addressed much of her old Tweets and jokes in an interview with The Guardian promoting Ralph Breaks the Internet! She would tell them:

“Certainly stuff that I did 10 or 15 years ago, I cringe at now, but I think that’s OK. I had really racial stuff that, in my mind, at that time, was illuminating racism and starting a conversation. Now I see it very differently, like: ‘Oh, right. Unarmed black teenagers are getting killed by cops daily. This joke is less funny to me.’ Or I used to say [adopts masculine Boston accent]: ‘That’s so gay.’ And then I would defend it by going: ‘What? I have gay friends! It’s totally different. I just mean ‘lame’. And as I was arguing it, I realised: ‘Oh. I’m the old man who says ‘coloured’ … ‘I have coloured friends!’”

Nowhere in the interview does The Guardian call for Silverman to be removed from Disney’s Ralph Breaks the Internet as they did with Kevin Hart. In fact, Kevin Hart has already explained his past jokes and Tweets much like Silverman did with The Guardian!

For his part, Cannon has been a friend of Kevin Hart for many years. It comes as no surprise that he went to bat for his old pal. They also worked together on the BET’s Real House Husbands of Hollywood for five seasons. A guilty pleasure of mine I can admit.

On social media, reactions were a bit mixed with some even challenging Cannon about his own Tweets. But he quickly shut them down and even went so far as to call out “politically correct” bullsh**. 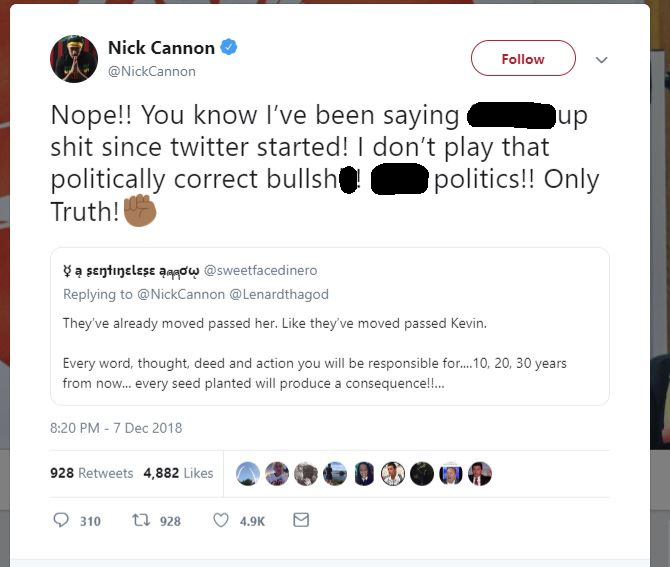 A new host for the Oscar ceremony has yet to be announced by the academy following Kevin Hart dropping out.

What do you think of Nick Cannon’s defense of Kevin Hart? Do you think pointing out the double standard could help blunt the moral outrage culture we find ourselves in? Or could Nick Cannon soon find himself a victim of a moral witchhunt? Let me know in the comments below!