Multiple comic book movie news websites including ComicBook.com and ComicBookMovie.com attacked comic book fans because they expressed that they do not plan to see Brie Larson’s Captain Marvel when it comes into theaters.

The movie is not being review bombed on Rotten Tomatoes. Comic book fans are simply stating they are not interested in seeing Captain Marvel.

They can’t “review bomb” the movie because the film hasn’t come out yet, and users can’t provide a rating. You can only mark if you are interested in seeing the film or if you aren’t interested in it.

Nevertheless, ComicBook.com described people who said they aren’t interested as “sexists” and “trolls.”

ComicBook.com has faced a number of controversies recently. Most recently they took a joke “Racist Deku” meme seriously.

Deadpool star Ryan Reynolds even made fun of them, and one of their writes threatened “consequences” after Marvel fired Star Wars writer Chuck Wendig.

You can see how the website described people who are simply uninterested in seeing Captain Marvel as “sexist.” 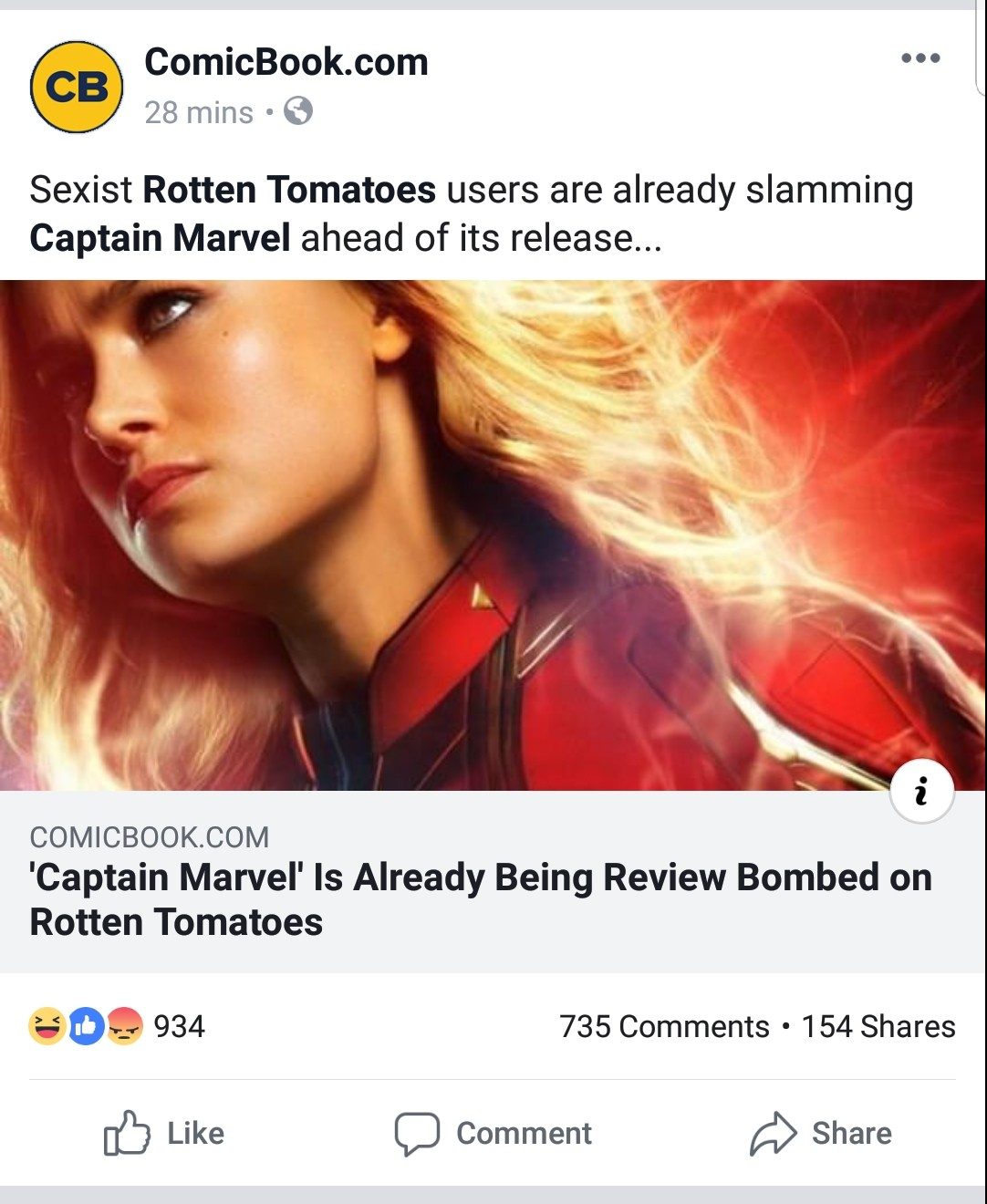 We Got This Covered would make similar claims to ComicBook.com. Their headline would shout, “Internet Trolls Trying to Sabotage Captain Marvel’s Rotten Tomatoes Score.”

Clearly, people expressing their opinion on a platform designed to do just that is “sabotage” to the audience score, a score they aren’t even affecting because the movie isn’t out yet. Does this sound odd to you?

We Got This Covered wouldn’t describe these folks as “sexist.”

That would not be the case for ComicBookMovie.com. In a similar article, their headline would blare, “Trolls Start Targeting Captain Marvel on Rotten Tomatoes As Opening Weekend Projections Rise.” (Archive link: http://archive.is/gdk3V)

It’s a much more accurate headline, although they are still calling fans who are uninterested in seeing Captain Marvel as “trolls.” In their actual article they would describe these folks as “sexist trolls.”

As for what they deem sexist, ComicBookMovie.com posted three comments, “Larson has made it clear…men need not attend this movie.” “Looks like their set to ruin a franchise !!” and “This weird random made up super hero looks like Homer Simpson. Not interested.”

None of those comments look like they are discriminating against women because of their sex, the definition of sexism.

The first comment while not entirely accurate hints at star Brie Larson’s behavior on the press tour promoting Captain Marvel.

Larson also admitted that Marvel approached her to make Captain Marvel a “big feminist movie.” In fact, the film has embraced feminist slogans in its marketing using, “The Future is Female.”

The feminist movement has evolved over the years and in many respects is no longer about the equal treatment of men and women.

Doctor Christina Hoff Sommers has critiqued this new wave of feminism describing it as “a kind of female chauvinism.” She explains that this type of thinking is more akin to a religion than anything with actual evidence supporting it.

“Gender feminism looks at society and says society is rigged against women and every institution bears the impress of the patriarchy, women are a subordinate class and men are oppressors and so if you believe that to me it’s a theology because I can’t see any empirical evidence for it.”

Most of the negative comments seem to take issue with Brie Larson as a person, not her as a gender.

Charles H. writes, “Well, I really wanted to see it. I went to USAFA, as did her character in the movie. But then Brie had to come out as a bore SJW. I think I will save my money. Too bad. I can’t wait until the SJW movement dies and America can get back to true progressive politics.”

Onion H. adds their thoughts, “I wanted to see this at first but the actress who plays Captain Marvel seems to be just bland. I would only want to see it because it fits into the Marvel universe, not because of anything I’ve seen from the trailers.”

Aaron G. wrote, “Once Brie went on an anti-White male tirade I lost interest in this movie. What should I pay to see a woman who hates White men. She can wallow in her own hate filled life.”

However, there are people expressing their interest in the film as well.

Luis M. writes, “This movie looks fantastic. From the amazing visuals of the Kree alien empire to the space fight shown in the trailer, this movie looks to be one of the best Marvel movies yet!”

Colby N. adds, “This movie looks like it’s going to be great.”

Linus W. wrote, “This looks average AF… but its a marvel movie so i Will see it anyways.”

Now granted there are six pages of comments and there are some that are a little more angrier than the others, it is the internet after all, but most of the comments are specifically about how Brie Larson is promoting the film and her comments regarding white men.

It’s not hating on women or discriminating against Larson because she is a woman. The criticism is for the most part targeted towards how Brie Larson is promoting the film. And some don’t even mention Larson at all, simply providing their opinion about what they’ve seen from the movie based on trailers and other promotional materials.

ComicBook.com, ComicBookMovie.com, and We Got This Covered aren’t giving you the full story and are simply attacking Marvel fans for stating their opinions.

What do you make of the articles from ComicBook.com, ComicBookMovie.com, and We Got This Covered? Do you think these types of comments are “sexist?”