Following the passing of Dungeons & Dragons creator Gary Gygax in 2008, the GaryCon gaming convention was founded to honor Gygax’s life and legacy. The annual gaming event, hosted in Lake Geneva, WI, where Gygax originally founded D&D publisher TSR, Inc., boasts exclusive activities such as cosplay contests, movie screenings, and the presence of special guests at the event, such as Wizards of the Coast founder Peter Adkison and Justice League actor Joe Manganiello, for their guests to attend and experience.

In a seemingly surprise decision, on February 18th GaryCon announced in a statement posted to their website that they would be removing former TSR, Inc. editor and Role Playing Game Association founder Frank Mentzer from their list of special guests at the upcoming 2019 GaryCon:

After much deliberation, I made the decision to remove Frank Mentzer as a Guest of Honor from Gary Con. His past misconduct and threatening behavior violate the ethics and harassment policies established by Gary Con. This was a difficult decision for me because Frank was a long-time friend and employee of my Dad, he has been to every Gary Con and had the honorarium of Old Guard attached to his name. He made significant contributions to the gaming industry in the 1980s with Basic D&D and the RPGA. However, Frank’s harassing behavior, threatening communications, tone-deaf and unapologetic responses are unacceptable to say the least and not the kind of behavior that represents what Gary Con is about. This form of toxic aggression is detrimental to the safe space we as a gaming community strive for.

I want to make something crystal clear, Gary Con is about celebrating the love of gaming, making friends, having fun and sharing camaraderie. All while we honor the memory of my father, one of the most important figures in RPG history. In order for Gary Con to continue to be the premiere gaming convention that it is, we must ensure that everyone feels welcome, safe, and believes that they are a valued member of our community regardless of their gender, race, religion, sexual orientation, or what edition that they play. I want everyone to understand that if someone acts inappropriately, the staff will take action swiftly to correct it.  It is my reasoned judgment that having Frank as a Guest of Honor was counter to these principles.  That is the bottom line.

Though Mentzer is no longer a Guest of Honor, it does not appear that he has been completely banned from attending the convention.

No specific incidents or reason for the removal has been given by GaryCon or it’s associates. Some fans speculate that this ban stems from a 2015 incident between Mentzer and former Guild Wars 2 writer Jessica Price, where Mentzer sent Price direct messages on Twitter in a questionable attempt at being flirtatious. Around the time of this incident Price also criticized Mentzer for his alleged response to a Facebook post made by Price relating the story of a woman who was groped on a bus in Seattle. According to Price, Mentzer questioned why the female victim did not retaliate and then proceeded to harass her friends. Mentzer had a different take on the situation, stating as much in a series of Facebook posts following the alleged incident: 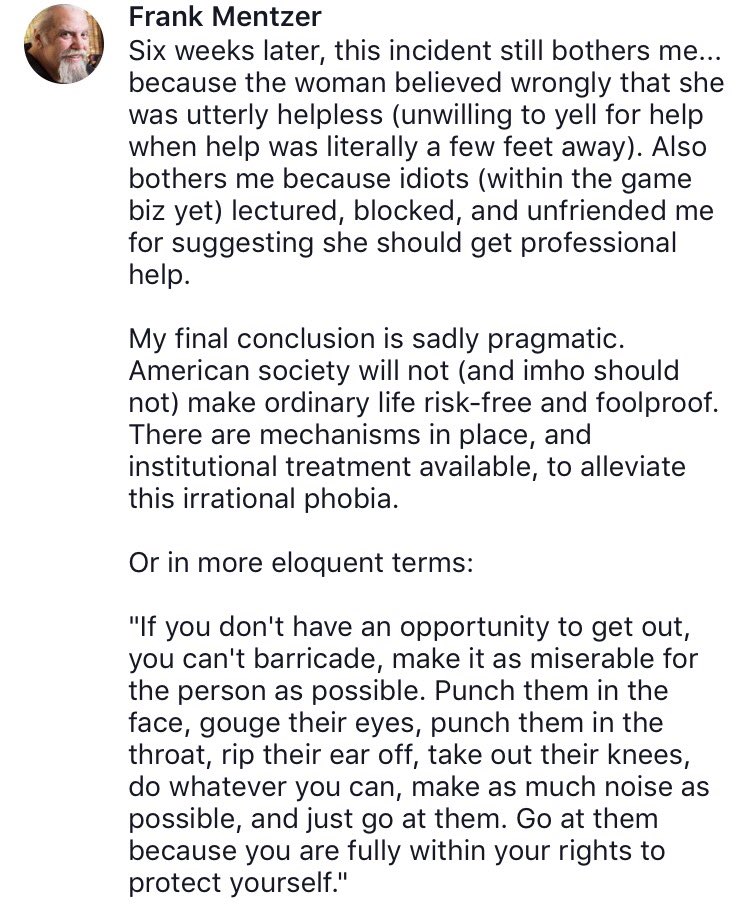 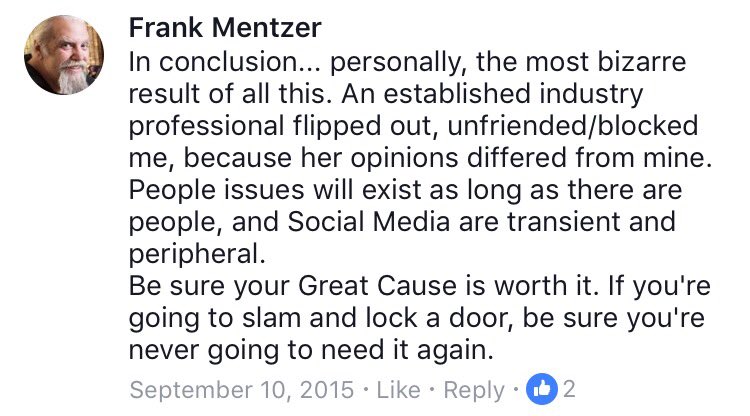 Frank Mentzer’s initial response to the interactions between him and Jessica Price regarding Mentzer’s questioning of an alleged sexual assault victim. The second post was made three days after Price told Mentzer to not contact her again. Price claims that Mentzer’s advice regarding closing doors was a direct threat against her.

Despite Price’s claim that she is “not impetuous enough to post stuff about the men for which I don’t [have receipts]“, no screenshots of the actual conversation prior to it’s deletion exist, leaving both Price and Mentzer’s viewpoints as subjective.

As of writing, Mentzer has not provided an official statement in response to his Guest of Honor standing being revoked. GaryCon will be held in Lake Geneva, WI from March 7th to the 10th.