In an interview with Big League Politics, Markota showed them a letter where Chase Bank stated, “After a recent review of your account, we have decided to end our relationship with you.” 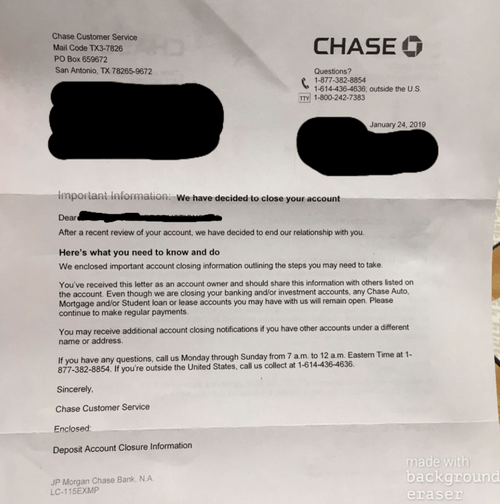 Markota told Big League Politics that the account shut down by Chase Bank was associated with her IndieGoGo campaign for the Lady Alchemy graphic novel which raised over $34,000.

Martina revealed she called Chase Bank to determine why her account was being closed, “They refused to tell me why.” She added, “They said they have the right to end our relationship and not tell me why.”

Markota told Big League Politics she believes the account was shutdown over her politics and the fact that she is a Donald Trump supporter.

Markota provided us with a statement concerning her IndieGoGo, noting that the crowdfunding platform is allowing her to change banks.

“I received a letter saying that the bank is going to end its relationship with me and I didn’t know why I called them and they said that they can’t tell me why they are shutting it down. They refuse to tell me and when I complained about it they said that they have the right to close my account without telling me why. When I saw other right wingers/conservatives getting their Chase accounts closed I was then convinced that it was political. I was concerned over my IndieGoGo campaign. Luckily, IndieGoGo will allow me to change banks, but in the meantime I have to transfer lots of funds and sort out all the new information. You can still contribute to my IndieGoGo campaign.”

In an interview with my colleague, John Trent, Markota detailed how she was “harassed and blacklisted” due to her politics.

“But, just like Comicsgate artists, my cohorts found out that I did not adhere to their ideology, the burlesque and nightlife scene are extreme SJWs and feminists, and they did everything to destroy my life and career.

I was harassed and blacklisted just like Mindy Wheeler. They ganged up on me as a group to harass the theatre I worked in until they told me not to come back into work. They harassed my agent and demanded she drop me or they would refuse to work on gigs with me. They made her life generally hell for letting me work at all until she just couldn’t take it anymore and dropped me. They created campaigns and social media movements and propaganda against me, soon my reputation was worldwide in the industry and I was completely blacklisted. They would contact anyone they knew I was associated to anywhere in the country and inform them to remove me and unfriend me, they contacted all my interactions on social media to inform them I was a “bigot.””

Markota told Dangerous last year that she is pursuing criminal charges against one performer:

“I am currently pursuing criminal charges against a performer who has tried to solicit my information to antifa and other left-wing media groups to defame me and put me and my family’s life in danger. They refuse to leave me alone, every step of the way. These people are relentless and angry. I left their scene, I left NYC, I moved on to another career and they still follow my every step and try to sabotage my life. At this point I think they want me dead.”

Markota would elaborate on this harassment in the interview below:

Markota isn’t the first public figure to have their bank account closed with Chase Bank. Enrique Tarrio, the chairmen of the Proud Boys fraternal organization had his personal Chase account shut down at the beginning of this month. Like Markota, no reason was given, just a letter stating that by April 1st he has to shut down his Chase accounts.

One America News Network reports that Iraq War veteran and pro-Trump supporter Joe Biggs had his bank account at Chase Bank closed. However, Biggs would tell One America News Network’s Jack Posobiec that following a number of veterans threatening to close their Chase Bank accounts, they offered to give him a new account. Despite offering him a new account, Biggs states he never received an explanation from Chase as to why his account was shut down and he decided to take his business elsewhere.

Other conservative media figures have faced similar deplatforming. Maybe the most well-known is InfoWars host Alex Jones who was removed from multiple platforms including Facebook, Twitter, Stitcher, Apple, and others.

Publisher Vox Day even saw his Arkhaven Comics IndieGoGo campaign for Alt-Hero: Q shut down by the crowdfunding platform.

Martina Markota’s Lady Alchemy graphic novel is currently in-demand on IndieGoGo. You can check it out here.