On February 13th, the internationally popular anime My Hero Academia (aka Boku No Hero Academia) saw the home video release of the 8th and final volume of the show’s 3rd season in Japan. In Japan, it is not uncommon for media releases such as manga volumes and anime home video to include ‘drama CDs’, which present items such as plot lines or side stories in a classic radio drama-esque fashion. The latest home release of My Hero Academia was no exception, but the bonus drama cd included with this volume troubled some fans due to its content.

According to a translation provided by Aitai Japan founder Audrey Lamsam, in the latest drama CD, lead characters Izuku “Deku” Midoriya, Katsuki Bakugou, and Shoto Todoroki are accosted by a villain whose ‘quirk’ (the in-universe term for special abilities) allows him to exert a level of control over another person’s body, a power which grows in effect the more the target tries to resist. As the three heroes attempt to resist and fight back, the villain begins to rip open Bakugou’s clothes using a box cutter, before informing the heroes that he intends to force them to pose in lewd and explicit poses in order to frame them as public perverts. The trio learn the quirk’s weakness, and by accepting that they are “stuck”, they eventually regain control of their bodies, with Bakugou unleashing an explosion on the villain before Deku and Todoroki deliver him to the authorities. 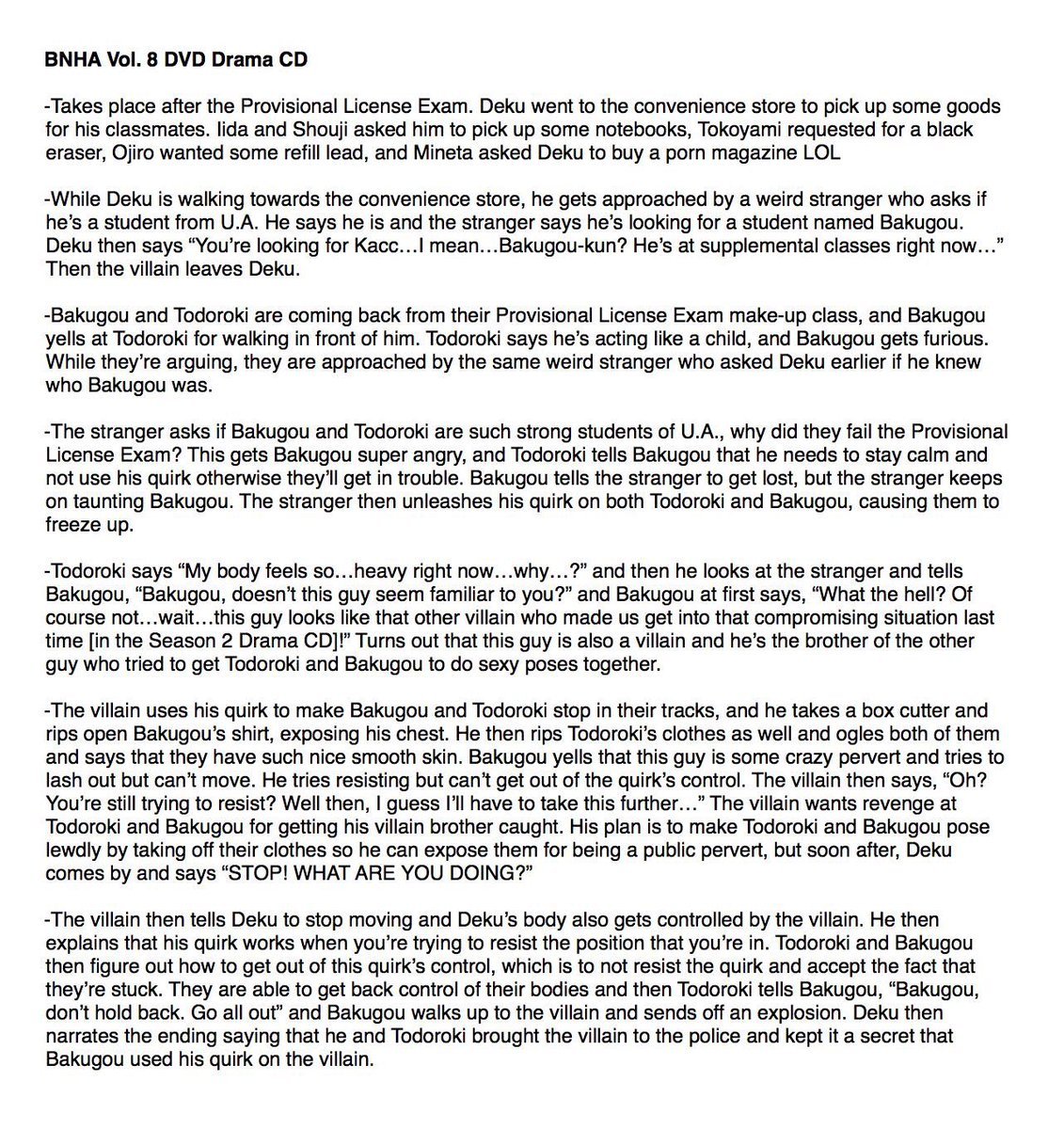 The original translation provided by Lamsam. The summary has since been deleted from her account, but has been recovered through reposts.

The audio drama is a sequel to the Season 2, Vol. 8 drama CD, “An Assassin from the Union”. In this story, Todoroki and Bakugou are similarly accosted by a villain whose quirk allows him to take control of their bodies, and threatens to paint them as perverts by forcing them to engage in a public display of affection with each other. This is far from coincidental, as the villain of the Season 3 audio drama is the brother of the villain featured in the Season 2 audio drama, and is spurred to accost the heroes due to his brother’s defeat.

The story depicted in the audio drama did not sit right with some fans, who quickly took to social media to express their shock and disgust at the apparent sexual assault of minors they had just witnessed (the lead heroes, Deku, Bakugou, and Todoroki are all canonically 16 at the time of the audio drama):

sexual assault warning
.
imagine being involved in BNHA and cosigning “our lead and his rival, two minors, get assaulted” for a whole voiced out drama CD.

god i fucking hate bnha SO FUCKING MUCH this is literally so disgusting i dont understand why its so fucking hard NOT TO SEXUALISE MINORS. AND WHAT MAKES THIS EVEN WORSE IS THAT ITS LITERALLY SEXUAL ASSAULT. WHO THOUGHT THIS WAS OKAY???? https://t.co/mea93vxd9U

Sexual Assualt is not good. It should not be portrayed in the media as fanservice. If you think the recent events in BNHA (if u are not up to date, I will explain below.) was fine and it was all for fanservice, please do unfollow. Though it is+

that bnha cd is seriously disgusting. i havent listened to it and i honestly do not want but holy fuck is that gross.

The outrage by fans even prompted Lamsam to delete her initial tweet wherein she provided the summary translation, acknowledging the controversy and also shedding some light on author Kōhe Horikoshi’s potential level of involvement:

Due to suggestions from others, I have deleted my translation of the BNHA Season 3 Vol. 8 drama cd summary. The drama was written with a specific audience in mind and while controversial, was probably done without bad intentions. However, the topic at hand is definitely not okay.

Also, have seen questions on whether or not Horikoshi was involved in the drama CDs. He or Shueisha most likely has guidelines on what type of things can go on in regards to spin offs, so as long as the content are within the bounds of the guidelines, it is “approved.”

As of writing, both Horikoshi and My Hero Academia publisher Shueisha have not made any statements regarding this controversy.