Catherine: Full Body, the long awaited remaster of the 2011 puzzle-platformer Catherine, was recently released in Japan on Valentine’s Day 2019. The game, which follows the exploits of Vincent Brooks as he is plagued by supernatural nightmares and a deteriorating love life, is slated to release on September 3rd for western audiences. However, manufactured outrage regarding a transgender character featured in Catherine has lead to changes specific to the western release.

On February 15th a thread was started on the gaming forum ResetERA concerning one possible ending in Catherine: Full Body being transphobic. This reaction was in response to a Japanese livestream which showed one of several potential endings which happened to feature Eric Anderson. He’s the birth identity of Erica Anderson, a male-to-female transgender character who has fully transitioned by the time the events of Catherine take place. Despite being unable to understand the context of the ending, as the audio is entirely in Japanese, fans feared that the appearance of Eric, rather than Erica, implied that Erica chose not to transition. Some criticized the developers for featuring Eric in a ‘good ending,’ believing the development team was implying that Erica is happier without transitioning.

However, later in the thread, a different user made a post claiming to have personally received the ending and posted a summary which refuted many of the reactionary claims regarding the ending:

Just got this ending, if anyone wants a summary of it, here:

After beating Mutton, Vincent meets with Catherine and tells her that he wishes they could have met differently, and that he doesn’t care about her past – and loves her. Catherine says she feels the same way, and opens a portal. Vincent wakes up in his high school days, with Jonny, Orlando and pre-transition Erica asking why he fell asleep. Paul, the character who is mentioned to have died at the start of the game is present too. Paul tells them that a new student has transferred, and Catherine walks into the classroom, taking a seat next to Vincent. The two of them start dating and several years later get married. At the reception, Tobby expresses his jealously at not being able to find such a girl like that, with Erica saying that there might be one closer than he thinks. Orlando then looks toward Katherine and Paul, and tells the two of them to hurry up and get married too. Catherine asks Vincent if he’s happy, and he says that he feels like the world totally changed when they met and that he owes everything about who is now to her. He tells her that he loves her, and they kiss. Catherine says that no matter what, she will make sure he’s happy for eternity. Then the game ends.

It’s not stated why Erica doesn’t transition in this end – but it isn’t clear how many years have passed between high-school and their wedding, and it is possible that it simply takes place before she transitioned (Edit: Tobby didn’t know Erica pre-transition). The rumor about Catherine trying to improve Erica’s life and doing so by stopping her from transitioning is false. Nor does Erica “come out as a gay man” in this end. Separate to this ending, I noticed that the line where Vincent tells Erica that she “wouldn’t be allowed to become a female pro-wrestler” is gone in this version of the game. The conversation where she says she wants to still happens, but they removed that line. (Edit: Turns out this line was likely removed because in Rin’s ending, Erica actually does become a female pro-wrestler.)

Another summary was posted by Niche Gamer founder and CEO Brandon Orselli, recounting the full events of the ending and showing that there is no overtly or explicit transphobic sentiments in this ending, noting at the end of his summary:

In the original Catherine release timeline, Vincent is 32, putting the events of that story 14 years or so after they graduate high school. This means Eric could still transition after this ending, and probably will considering he heavily suggested it to Toby.

That’s it. There is absolutely no suggestion that Erica was shown off as a man and that she’s better that way, nor was there any suggestion that Catherine changed everything to make everyone happy. Anyone suggesting this happens in this ending is lying and trying to create outrage.

Though the initial claim was disproven, the outrage did not end there, as the allegations of transphobia were acknowledged by Erica’s English-language voice actress, Erin Fitzgerald. Stating that she stood in solidarity with Erica’s trans-identity and with the trans community, Fitzgerald urged fans to wait to play the final product before they pass judgement:

I retweeted for the kind words about Erica. I support the localization team and the incredible work they did to be considerate about the subject matter… wait til it comes out before you judge it. Things need to be experienced in context to understand them. https://t.co/wr6ZYAy07h

This game has more meaning than the creators could ever truly know. Just in terms of visibility and conversation whether it was done right or wrong. People are learning. I hope to learn more after the localization is released.

However, three days after making these remarks, in a post in her personal Discover server, Fitzgerald indicated that the Atlus localization team would be making changes to the Western release of the game to address the topic of transphobia: 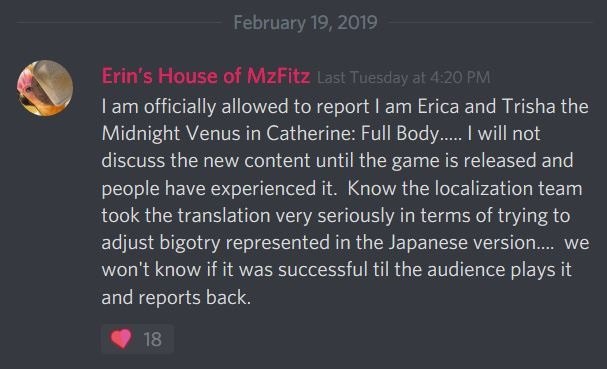 There has been no public statement from Atlus addressing or describing the alleged changes. Players will have to wait until the two editions of Catherine: Full Body can be fully compared before the changes, if any, can be confirmed and detailed.