Alyssa Milano hasn’t done much acting in recent years. However, she has turned towards political activism especially Twitter activism.

She chimed in against the Covington Catholic students and Nick Sandmann claiming “Red MAGA hats are the new white hoods.” 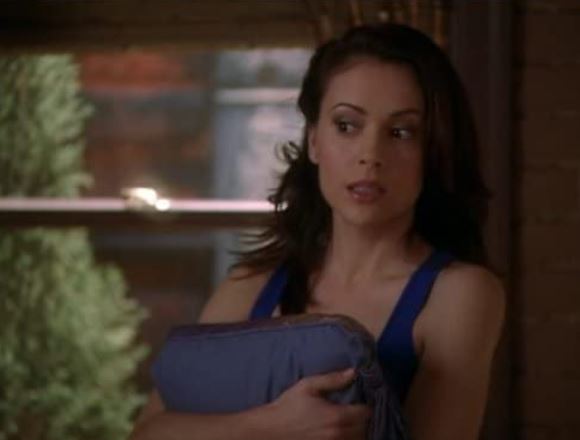 Her actions towards the Covington students might even see her face a lawsuit. She’s even offered up her own ribs to Supreme Court Justice Ruth Bader Ginsburg.

Most recently Milano took to Twitter to answer if she was a transgender.

Milano would claim solidarity with a number of people. She stated, “I’m trans. I’m a person of color. I’m an immigrant. I’m a lesbian. I’m a gay man. I’m the disabled. I’m everything. And so are you, Kirk.”

I’m everything. And so are you, Kirk.

Don’t be afraid of what you don’t know or understand. No one wants to hurt you. We are all just looking for our happily ever after. https://t.co/znkQizV37k

A number of people would criticize Milano for the Tweet with many pointing to the fact that she’s a rich white woman and can’t possibly understand any of the groups she claims she’s attempting to claim solidarity with.

Rich white woman pretends to be a transgender disabled immigrant person of color with multiple sexualities and pretends she can identify with the lives and struggles of all these people in the next hit blockbuster of the year! Starring Alyssa Milano. Rotten Tomatoes gives it a 0% https://t.co/XPsn63lKEa

Others criticized Milano for not including other groups claiming she only picked “certain identities” or groups specifically.

“I’m trans. I’m a person of color. I’m an immigrant. I’m a lesbian. I’m a gay man. I’m the disabled. I’m everything.”
Interesting that you only pick certain identities while claiming you are everything. . .

Some folks simply mocked Milano and the internet at-large for her tweet and discussing it. While others just mocked Milano’s Tweet. Heathers writer Carey O’Donnell even referenced Kevin Spacey’s coming out shortly after he was accused of sexual assault of a young teen.

Today we learned an actual human sex trafficker sold Chinese execs access to the President, and all Twitter is talking about is individual tweets about Ann Coulter and Alyssa Milano. We deserve our dumb death

One user decided to just call out the actress for her Tweet, implying that she uses the controversy stirred up by them as a way to stay in the public eye:

It didn’t stop there though. Some began to call out the actress for selling clothes and posing in photos that they deem racist due to their use of Native American merchandise as well as not working with native groups:

Here are three pictures of #AlyssaMilano @Alyssa_Milano for you who follow her to see. You admire her politics. What you don’t know is this: she’s aware that Rskin merch was deemed racist in federal trademark court, yet she still sells it. AND: refuses to engage us natives on it. pic.twitter.com/vWbeo1SRS7

Shortly afterward Alyssa Milano replied to her own Tweet. Stating that she was “glad this tweet invoked conversation.” She also apologized for offending people. She then claims her original tweet was her expressing empathy.

I’m glad this tweet invoked conversation. I’m so sorry it offended some. I see you and hear you. But just a reminder, empathy is not a bad thing. Nuance is important and literal interpretation is not always intended. And I can identify with and not identify as. Both are powerful.

Many were still unimpressed by Milano’s explanation.

Wait, what?? So @Alyssa_Milano IS capable of reading feedback when folks tell her she’s out of her lane…which makes her silence & continuing to perpetuate anti-Native racist mascots even more appalling. https://t.co/vvMqn93c4N

Actor James Woods would add another potential identity for Milano to mark off. He would write, You left out ‘potential defendant…’ #CovingtonLawsuit.

As I mentioned above, Milano is on the list of Nick Sandmann’s lawyers and she could face a potential lawsuit where she insinuated that Sandmann and everyone else who wears a red MAGA hat are racists.

What do you think of the actress’s attempt to show solidarity with these groups? Do you think the criticism against her is valid? Do you think her apology was sincere?