Alyssa Milano is leading a group of some of Hollywood’s elite celebrities in a call for Hollywood to boycott the state of Georgia should they pass a bill banning abortions after a heartbeat is detected.

Milano called for a boycott of Georgia on Twitter earlier this week stating that Georgia bill HB 481 Georgia ‘Living Infants Fairness and Equality (LIFE) Act’ is “bad for business.” She also claims the bill “strip[s] women of their bodily autonomy.”

There are over 20 productions shooting in GA & the state just voted to strip women of their bodily autonomy.

The bill reads in part:

Milano rallied her fellow celebrities which include Avengers: Endgame actor Don Cheadle, and Marvel TV’s Patton Oswalt to sign their names to a letter addressed to Georgia Governor Brian Kemp stating they “cannot in good conscience continue to recommend our industry to remain in Georgia if H.B. 481 becomes law.”

The letter also reads, “We can’t imagine being elected officials who had to say to their constituents ‘I enacted a law that was so evil, it chased billions of dollars out of our state’s economy.'”

The letter concludes, “we will do everything in our power to move our industry to a safer state for women if H.B. 481 becomes law.”

You can see the full letter below along with all the celebrities who have signed it: 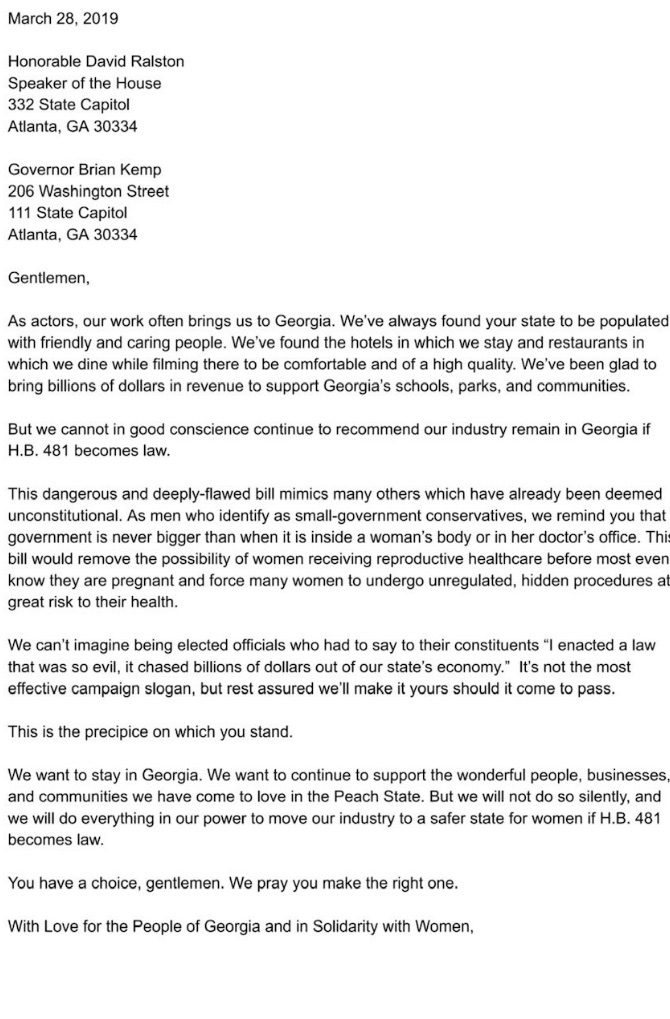 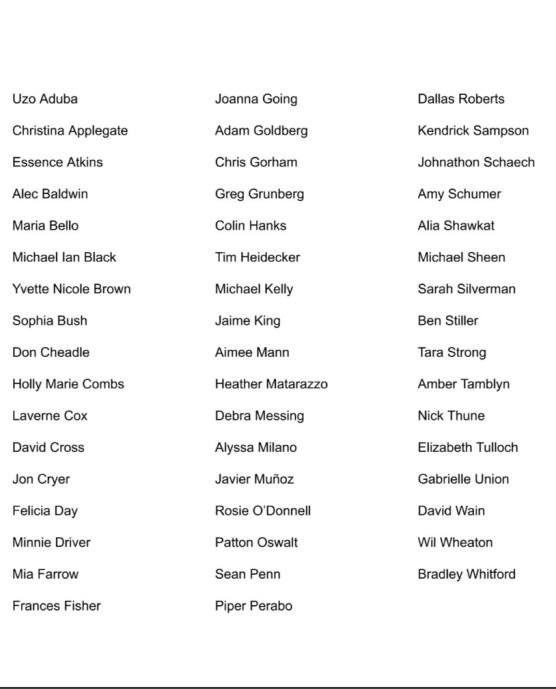 But Alyssa Milano and company aren’t the only ones taking aim at the state. The Writers Guild of America West and East both signed on to Milano’s crusade, saying in part:

“This draconian anti-choice law would discourage people in our industry from working in Georgia and could harm the state’s vibrant film and television industry.”

Echoing much of what Milano said in her letter. The two guilds basically say that if the bill passes and becomes law then Georgia will force many within their industry to leave the state or not sign on to new projects in the future. Pointing to the cost that “would be most deeply felt by the residents of Georgia.”

You can read more of the letter below:

“This law would make Georgia an inhospitable place for those in the film and television industry to work, including our members … If the Georgia Legislature and Governor Kemp make HB 481 law, it is entirely possible that many of those in our industry will either want to leave the state or decide not to bring productions there. Such is the potential cost of a blatant attack on every woman’s right to control her own body.

The cost would be most deeply felt by the residents of Georgia – including those who directly work in the film and television industry, and those who benefit from the many millions of dollars it pours into the local economy.”

The bill, H.B. 481 passed the Georgia House earlier today, and aims to ban abortions that take place after around six weeks of pregnancy.

Hollywood does a ton of business in Georgia. Atlanta-based AJC reports in Fiscal Year 2018 there were 455 productions that did “$2.7 billion in direct spending.” They noted this was the most productions “since the tax credits were passed in 2008.”

Georgia provides film and TV productions with up to a 30 percent tax credit if they spend at least $500,000 in the state.

The Walking Dead, Avengers: Infinity War, Black Panther, Avengers: Endgame, Ozark, and more all have or had a production home in Georgia.

Do you think this letter and a call for Hollywood to boycott Georgia will be effective?