The Star Wars Twitter account deleted a poll that asked fans whether or not they would be part of the Resistance or the First Order in the new Star Wars trilogy. 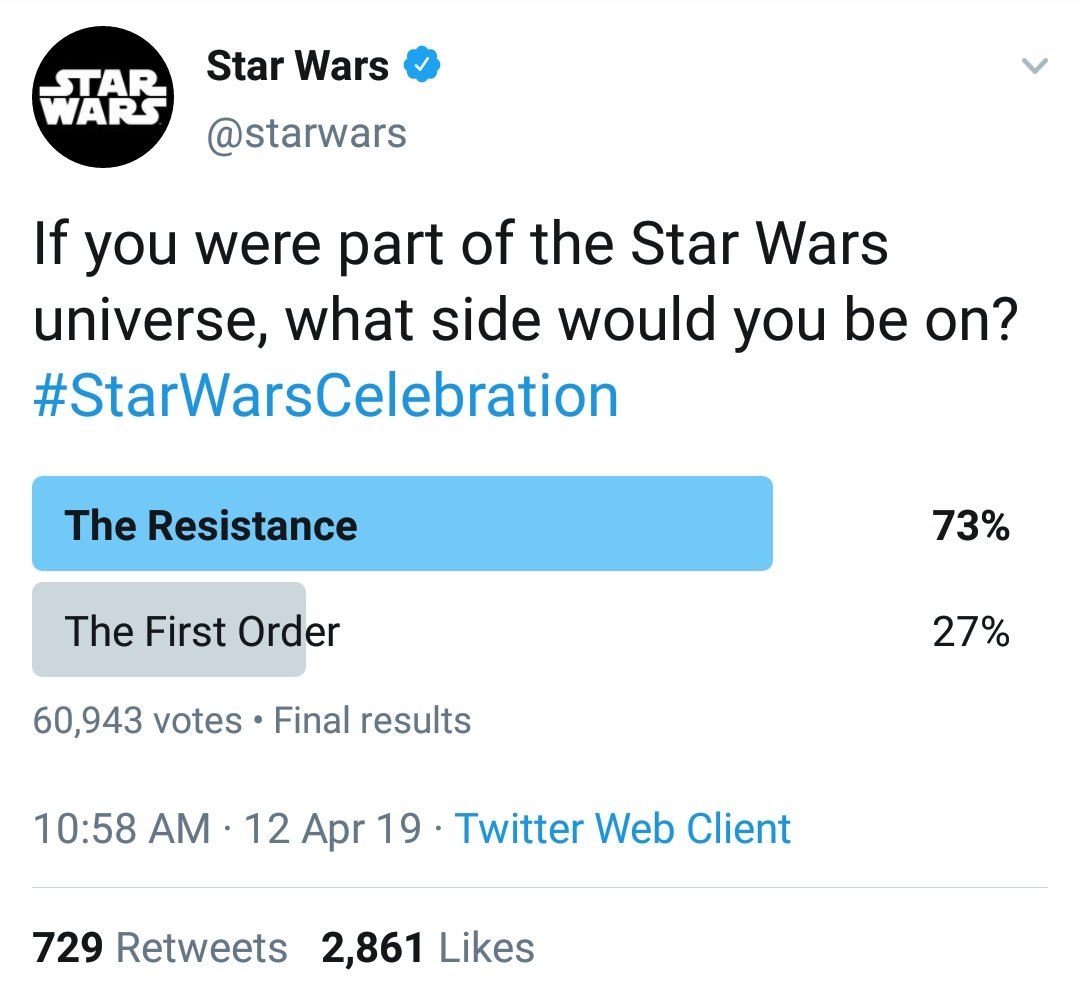 The poll was highly criticized by many people who were trying to equate the fictional universe of Star Wars to what appears to be real world politics.

Many of them apparently have never heard of the game Star Wars: The Old Republic, or Star Wars Galaxies, or [easyazon_link identifier=”B078QC63NX” locale=”US” tag=”boundingintocomics-20″]Star Wars Battlefront II[/easyazon_link], or any of the Star Wars LEGO games where players are able to choose sides whether its Sith or Jedi, Empire or Rebellion, Resistance or Fist Order.

Nevertheless they declared that the poll was a way to discover people who are “fascist.”

YouTuber Vito captured a number of Twitter users who indicated they think that people who chose the First Order in the poll are fascists.

We found some more examples below:

“I’d join an SS division because they have cool uniforms!” Does that make the joining better? Truth is both the question and the First Order answers merely didn’t consider the implications of what they just said, but it’s a hilariously bad look.

Yeah it’s fuckin star wars so what? Most of the people who answered First Order are not actual fascists but that’s how the answer made them look. They essentially asked “would you join space nazis?” and people answered yes. That gives a really bad impression.

“Hands up who likes fascism?” https://t.co/RbKvccySLG

16,454 people say they would side with space Nazis.

Hmmm….. space nazis or the resistance? 27% of the fans are facists. They should cancel #StarWarsJediFallenOrder and #StarWarsEpisodeIX since it clearly brings joy to nazis and the alt-right pic.twitter.com/Gqw6wn9bxD

All this Star Wars hype, while most people blend out that at least half the “fanbase” strongly idolizes space nazis. And we really wonder why white nationalism & right-wing terrorism is on the rise all around the world again? Why do people not see this.