A new promo for CBS’s The Good Fight, a spin-off of The Good Wife, has quickly been taken down after many on social media accused the show of supporting political violence and the assassination of President Trump.

The official Twitter account for the show tweeted out “This is important. #TheGoodFight.” The tweet included a promo for the show where a mob of people in red jackets are destroying cars and property. 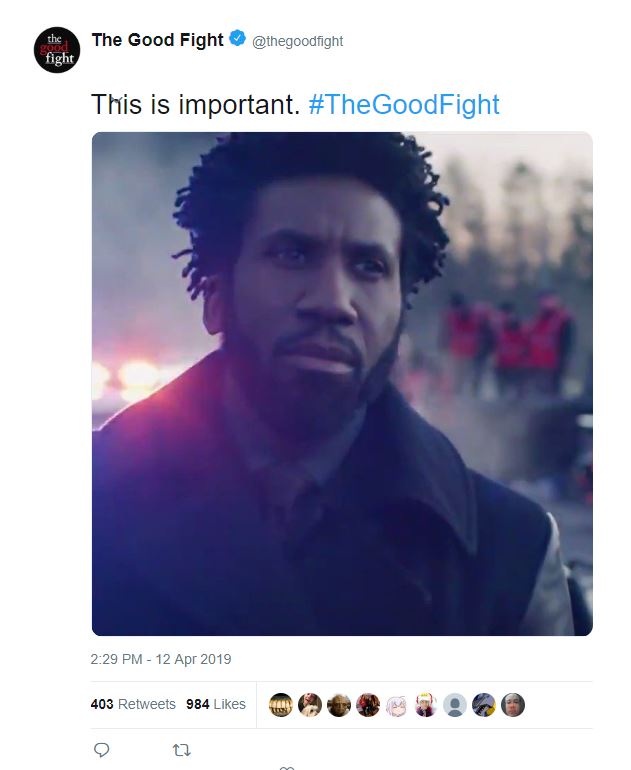 In the video which you can see below, Jay Dipersia played by Nyambi Nyambi walks through what appears to be a riot. As he walks through the violence he talks about the idea of violence and brings up Alt Right figurehead Richard Spencer.

“Is it all right to hit a Nazi unprovoked? I was always taught to never throw the first punch. Never instigate. Defend, but don’t attack. But then I saw a video of the white nationalist, Richard Spencer, being punched in the face during an interview and I realized… Spencer was in a pressed suit, wearing a tie, being interviewed like his opinion mattered. Like he should be considered part of the conversation, like Neo-Nazism was just one political point of view.

And then I realized that there’s no better way to show some speech is not equal. Some speech requires a more visceral response. It’s like Overton’s Window. That’s the term from which ideas are tolerated in public discourse. Well, Overton’s Window doesn’t mean s*** unless it comes with some enforcement. So yeah, this is enforcement.

This clip of the show comes after the latest episode of The Good Fight titled, “The One Where a Nazi Gets Punched.” In the episode, Jay is sent to a polling location, where a group of individuals wearing red jackets show up in order to intimidate voters.

In EW’s recap of the episode they describe the red jackets as thus, “a group of voter intimidating bigots, show up to the school and start scaring minority voters away.” The red jackets appear to be inspired by the Yellow Vest protests in France. But the heart of the episode appears to be inspired by the protests in Charlottesville, Virginia back in 2017.

While the above clip advocates political violence, the episode actually glorifies doxxing as well.

“So, Polly asks Lucca to snap some photos of every Red Jacket so that she can dox them. Yes, this is another instance in which the show’s leftist contingent uses the other side’s methods and weapons against them.

As Lucca and Jay wait for Polly’s doxing to do its work, they watch Naomi interview the Red Jackets’ leader, who is pretty open about his racism. After the interview ends, Jay runs into him in the bathroom and actually ends up punching him. One of the Republican lawyers is in one of the stalls when this happens, but he covers for Jay and pretends like it didn’t happen. This camaraderie rears its head again outside of the school where one of the Red Jackets flips out over being fired from his job because of Polly’s doxing. Lucca admits she doxed him and the other Republican lawyer stands up with her, as do many others. And that ends up leading to an all-out street fight between the Nazis and everyone else. The Good Fight is a fairly cynical show, but it’s rather optimistic of it to show Democrats and Republicans uniting to beat up Nazis. Cars are flipped, windows are smashed.”

While the clip and episode appear to promote political violence, it isn’t the only case. On April 12th, the show’s official Twitter account tweeted out a photo from the show writing, “Hmmm. some of those target words look a little familiar. Did you catch any easter eggs in this scene from The One Where Diane Joins The Resistance? #TheGoodFight.”

In the below photo (Archive link: http://archive.is/c7Mll), you can see the words “Assassinate, “President, and “Trump,” in the upper left hand corner. In the middle column it also reads, “Eliminate” and “Mar-A-Lago.” Mar-A-Lago is is a luxury golf club in Palm Beach owned by The Trump Organization. President Donald Trump often stays at the club in the winter. 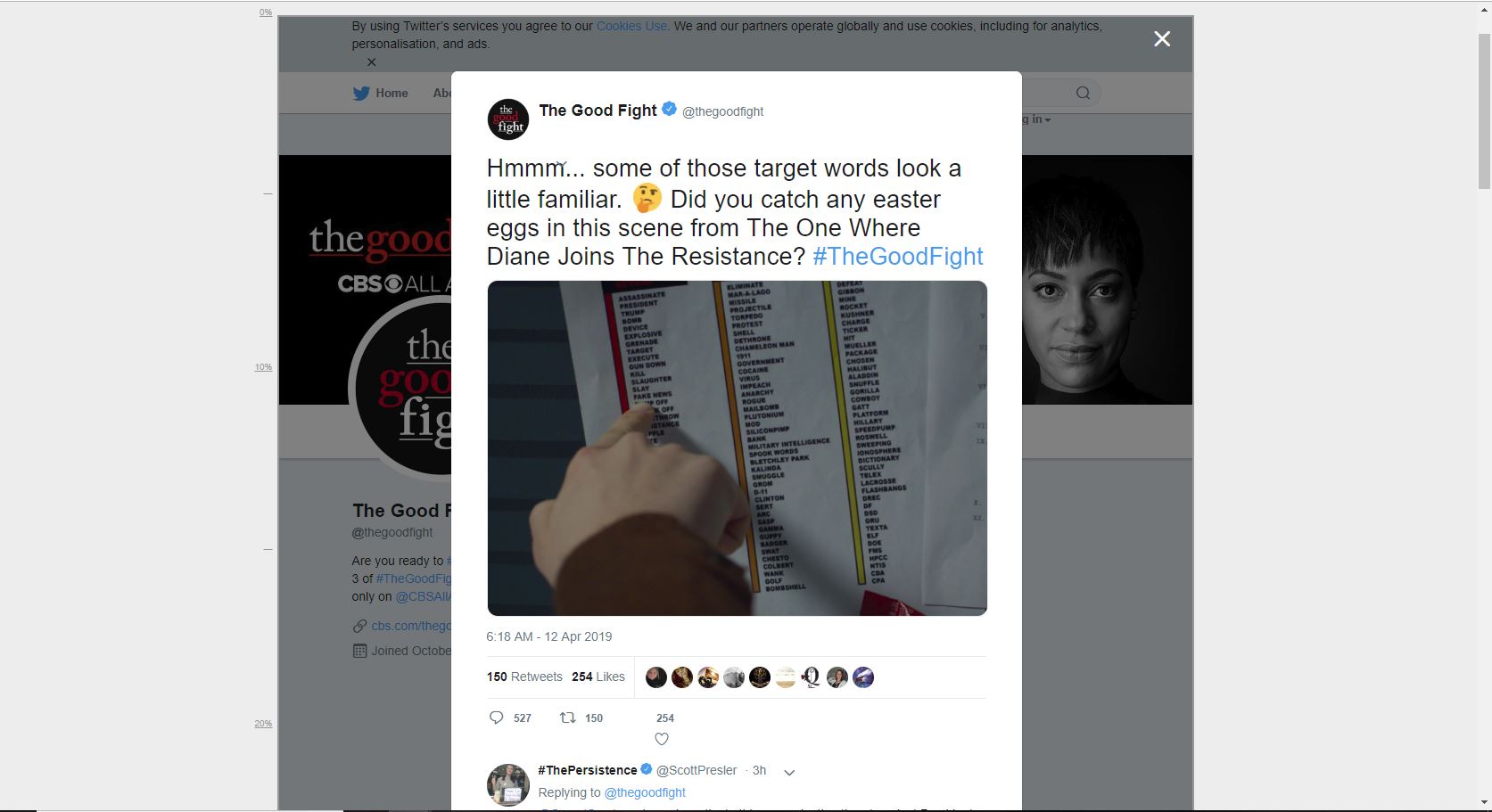 According to Deadline, the list is barely seen in the episode. However, it’s used by NSA analysts Stephen and Dev to track Diane, who recently joined a female resistance group looking to take down President Trump’s approval rating.

One analyst, who tapped her phone, states, “Diane, she just used five target words in one sentence.” He can then be seen using the list and running his finger over “Assassinate,” “President,” and “Trump.”

Now, what is the issue, aren’t Nazis the bad guys? Well, yes they were. In fact the United States alongside the Soviet Union were able to defeat them all the way back in World War II.

However, as journalist Nick Monroe points out the term is being used to apply to political enemies in order to justify violence against them. We’ve seen this with a number of comic book creators including Ethan Van Sciver and Richard C. Meyer. Even YouTubers Clownfish TV have been labeled Nazis by Anime News Network’s Mike Toole. And most recently when Kathy Griffin targeted Nick Sandmann and the students of Covington Catholic High School where she wrote on Twitter, “Covington’s finest throwing up the new nazi sign.” They were reportedly using the “Okay” sign.

“Why is “punch Nazis” a bad thing to say and incitement to violence?”

Because the term NAZI is being used by far-left extremists to apply to ANYONE who disagrees with them, politically.

It DOES NOT SOLIDLY MEAN WWII HITLER’S REGIME anymore. To deny that fact would be FOOLISH.

The fact that @thegoodfight , a MAINSTREAM MEDIA OUTLET, **DELETED** their tweet?

This should be ENOUGH PROOF that LEFT WING EXTREMISM is BAD and anyone calling for it needs to get their head examined. pic.twitter.com/UBnioYYhSB

In fact, Monroe points to the recent Star Wars poll that was taken down that asked fans if they would join The First or The Resistance. Star Wars took the poll down after a number of people insinuated those who were choosing to join the First Order were fascists and Nazis.

ANOTHER reason why @thegoodfight saying “PUNCH NAZIS” is bad.@VitoGesualdi pointed out this Star Wars poll that people interpreted as “28% of Star Wars fans are Nazis.” https://t.co/L6cdCsewC5

Is @thegoodfight advocating violence against 28% of Star Wars fans? pic.twitter.com/uNQbpLdKNo