Gareth Roberts, a writer for the popular Dr. Who TV series that airs on the BBC,  saw his upcoming Dr. Who short story removed from a BBC Books anthology.

Roberts claims his short story was removed from the anthology because a number of Doctor Who fans “agitated for my removal.”

He wrote on Medium about his short story being removed from the anthology.

“I was commissioned by BBC Books to write a short story for an anthology of Dr Who stories. I’ve written several Dr Who episodes for tv and many Dr Who books, for BBC Books and for Virgin, the previous licence holder for Dr Who fiction.

I completed and submitted the work.

The publication of the book and its authors was not intended to be announced until early June, but some details, including my contribution, were leaked accidentally.

At this point a section of the Dr Who fandom agitated for my removal. Also, some of the other contributing authors to the book (I don’t know who) threatened to withdraw if I was involved. BBC Books immediately folded to these demands, and I was informed that although I would be paid my story would not be published, as they judged – wrongly, in my opinion – that a potential boycott would make the book ‘economically unviable’.”

Roberts then shared an image of an offending Tweet, which he claims was the cause for the Dr. Who fans to agitate for his removal. 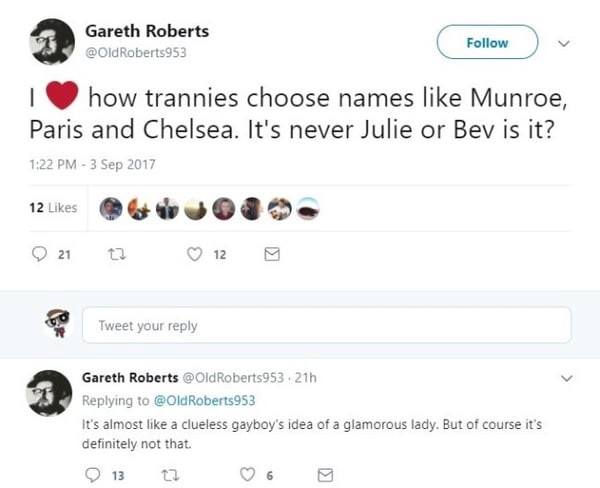 On Medium, Gareth details some of his experiences as a gay man back in the 1980s. He specifically notes that as “a member of the London Lesbian and Gay Teenage group we referred to ourselves and each other as queers, trannies, and dykes.”

Roberts would then declare his position on gender identity.

“I don’t believe in gender identity. It is impossible for a person to change their biological sex. I don’t believe anybody is born in the wrong body.

I think it’s wrong to – write a falsehood into law; compel people by law to speak words they do not believe; rewrite the law to remove women’s biological sex-based rights and protections; reinforce gender stereotypes; medicalise children who don’t conform to gender stereotypes. That’s it.”

Gareth doesn’t end it there. He notes that his he doesn’t believe his view should be protected.

“I don’t believe my view should be protected either. People must be protected, ideas must never be. I would ask the writers who objected to my inclusion in the same book as them to reflect on that.”

One of the writers behind Gareth Roberts blacklisting claims to be a fellow contributor to the upcoming anthology volume, Susie Day. The children’s book author had some choice words to describe Roberts. She called him “an awful human being” who should experience “consequences” for his views.

Thank you for saying this. I do understand why people have concerns, about artist v art, about free speech. But no one’s entitled to write for DW, or any other kind of job. And I think there should be consequences for being an awful human being.

Day would explain just why she targeted Roberts.

So, since That Doctor Who Writer’s blogged about it: I’m a contributor who questioned GR’s inclusion in the anthology, on account of him being a vocal transphobe, amongst some other views he found in the bin. (I don’t know if any of the other writers were involved.)

When I signed up to the project, I only knew of him as a DW TV writer. When the contributor list leaked, I learned his inclusion was incredibly hurtful to trans fans, and why. Being involved felt like a tacit endorsement of his views. Big nope.

I raised my concerns, and said if he was in, I was out. I don’t share a platform with bigots (including ones who say it’s all just bants, before restating their bigotry). I fully expected to be ditched. He’s a name in this world. I’m… not.

BBC Books made their decision. I’m grateful they took the opportunity to demonstrate that transphobic views have no place in the Whoniverse, both in and outside the stories.

Thank you to everyone who spoke so honestly about why this mattered to them, and for continuing to do so today. Hug/fistbump, you choose. /thread