The Notebook author Nicholas Sparks has been accused of homophobia and discrimination after e-mails were published which show Sparks taking issue with the actions of a former headmaster regarding the alleged establishment of an ‘LGBT club’ at an academy co-founded by the author.

The Epiphany School of Global Studies is a self-described “comprehensive college-preparatory and globally-focused school” co-founded by Sparks and his wife, Catherine Sparks, which distinguishes itself among other schools by proudly being “anchored in the Judeo-Christian commandment to Love God and Your Neighbor as Yourself.” In 2013, the school offered the position of headmaster to a teacher named Saul Benjamin who accepted the offer and began his employment at The Epiphany School in February of the same year. However, Benjamin’s tenure at the school would last a little over three-months, as Benjamin resigned from his position at the school and in 2014 filed a lawsuit against Sparks and members of The Epiphany School Board of Trustees seeking damages for “discrimination, breach of contract, emotional distress and defamation,” as his attorneys claimed that “Sparks and members of the Board unapologetically marginalized, bullied, and harassed members of the School community whose religious views and/or identities did not conform to their religiously driven, bigoted preconceptions.”

In the midst of the ongoing legal battle between Sparks and Benjamin, news website The Daily Beast obtained copies of e-mails sent by Sparks to Benjamin which had been presented during the discovery process of the court case. In these e-mails, Sparks speaks candidly to Benjamin about his anger and frustration towards Benjamin’s focus on “tolerance, diversity, non-discrimination and LGBT” issues: 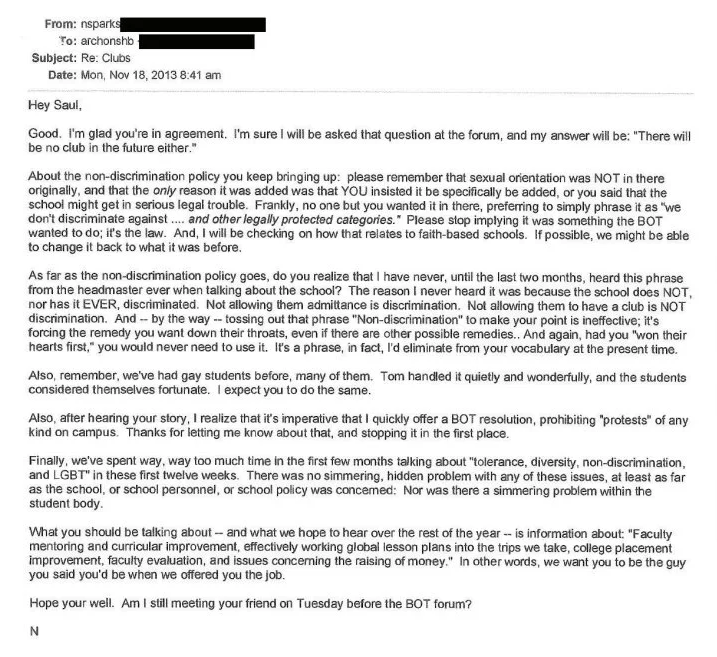 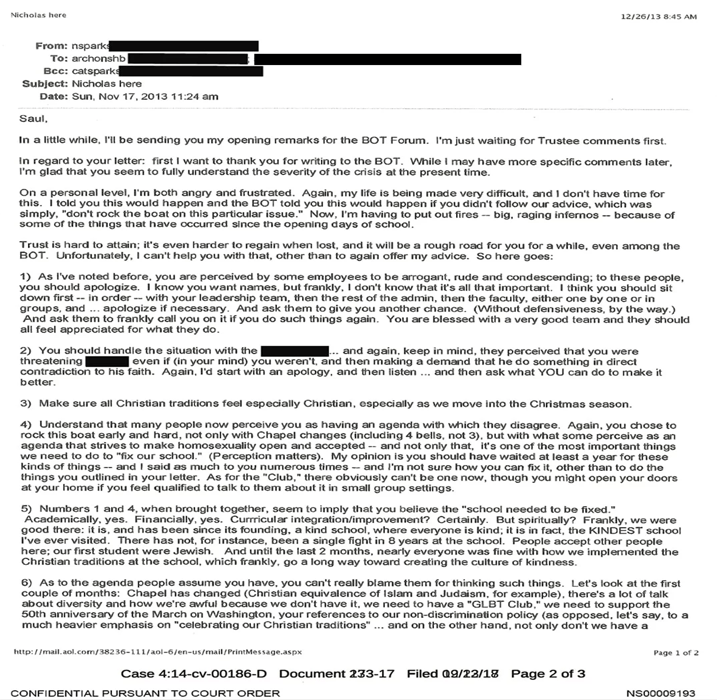 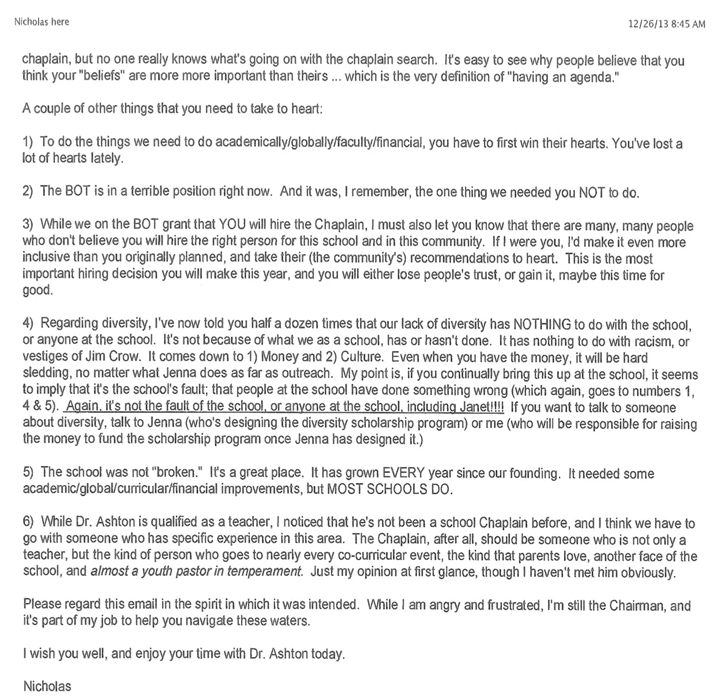 Screenshots of the leaked e-mails as provided by The Daily Beast.

While it is clear that there is a staggering amount of animosity between Sparks and Benjamin due to their conflicting ideological focuses, the recently obtained e-mails also bring to light Sparks’ prejudicial feelings regarding the creation and existence of an LGBT club at the school, of which Benjamin was accused by the school of “promoting a homosexual culture and agenda” by allegedly creating the club in secret against the explicit direction of the Board of Trustees:

“I’m sure I will be asked that question at the forum, and my answer will be: “There will be no club in the future either.

About the non-discrimination policy you keep bringing up: please remember that sexual orientation was NOT in there originally, and that the only reason it was added was that YOU insisted it be specifically be added, or you said the school might get in serious legal trouble. Frankly, no one but you wanted it in there, preferring to simply phrase it as “we don’t discriminate against …. and other legally protected categories.” Please stop implying it was something the BOT wanted to do; it’s the law. And, I will be checking on how that relates to faith-based schools. If possible, we might be able to change it back to what it was before.”

“Understand that many people now perceive you as having an agenda with which they disagree. Again, you chose to rock this boat early and hard, not only with Chapel changes (including 4 bells, not 3), but with what some perceive as an agenda that strives to make homosexuality open and accepted – and not only that, it’s one of the most important things we need to do to “fix our school” […] As for the “Club” there obviously can’t be one now, though you might open your doors at your home if you feel qualified to talk to them about it in small group settings.”

Sparks would also advise Benjamin in another e-mail to “Remember, we’ve had gay students before, many of them,” and that “[The former headmaster] handled it quietly and wonderfully… I expect you to do the same.”

The rumors that Benjamin had founded a ‘gay club’ were sparked by a group of students who were beginning to informally and consistently meet to discuss their sexual identities and orientations. Reports of bullying by prominent students towards students from the group were received by Benjamin, but the alleged bullying only served as a catalyst for the Board’s accusations and decisions.

Shortly after the initial publication of these e-mails by The Daily Beast, Sparks took to his Twitter to address the TheDailyBeast article and the resulting public opinion of the school as a bigoted institution:

Since 2014, I have vigorously been defending the lawsuit brought against me and the Epiphany School of Global Studies by its former headmaster, Saul Benjamin.

The article appearing in today’s TheDailyBeast is not news, and repeats false accusations and claims made against Epiphany and me, and largely ignores the overwhelming evidence we have submitted to the Court.

As we prepare for trial, I want to make one thing clear:

At this time, we will not have any further comment.

Benjamin’s case is scheduled for trial in August.