A Japanese fan-artist has been subjected to harassment and accusations of racism due to a lighting choice on a drawing of the recently announced Pokémon character Nessa which slightly lightened the tone of her skin color.

On June 13, artist najuco shared an image they had drawn of the Pokémon Sword and Shield Water-type Gym Leader to their personal Twitter page. For the drawing, najuco chose a softer, muted palette choice for Nessa, resulting in a stylistic and colorful piece which deviated slightly from the colors displayed in her official artworks:

The image quickly gained traction among najuco’s almost 60,000 Twitter followers and once the piece was fully circulating across social media, najuco’s post was quickly descended upon by users accusing najuco of white washing and racism:

Nessa is a brown girl. Please make sure your art reflects that. 🙁 https://t.co/G2IuQ7SCIc

this would be cute if you got her skin tone correct, white washing is ugly https://t.co/59liifHQeb

You’re not a good artist if you can’t portray a dark skinned person in a muted color palette. Sorry.

This artist can draw however they’d like and I think that’s great. But acting like they have a grasp of color and value and that this is an accurate portrayal of her skin tone is just not correct. Her skin IS lighter here. pic.twitter.com/V942GKIvQ9

This is a drawing of a tan white person. Black kids can’t enjoy seeing themselves in media without y’all sending the message that lighter is better. https://t.co/FbYB2bsfdZ

One particular user, in a series of now deleted Tweets, claimed to “fix” najuco’s art by darkening Nessa’s skin color (a half-hearted attempt, as the user applies a simple darkening layer to the image rather than utilizing any sort of color theory or artistic effort) and, when asked by najuco to delete the post due to najuco’s policy on reposting their art, the user claimed to be “within [her] right] to put najuco “in [their] place: 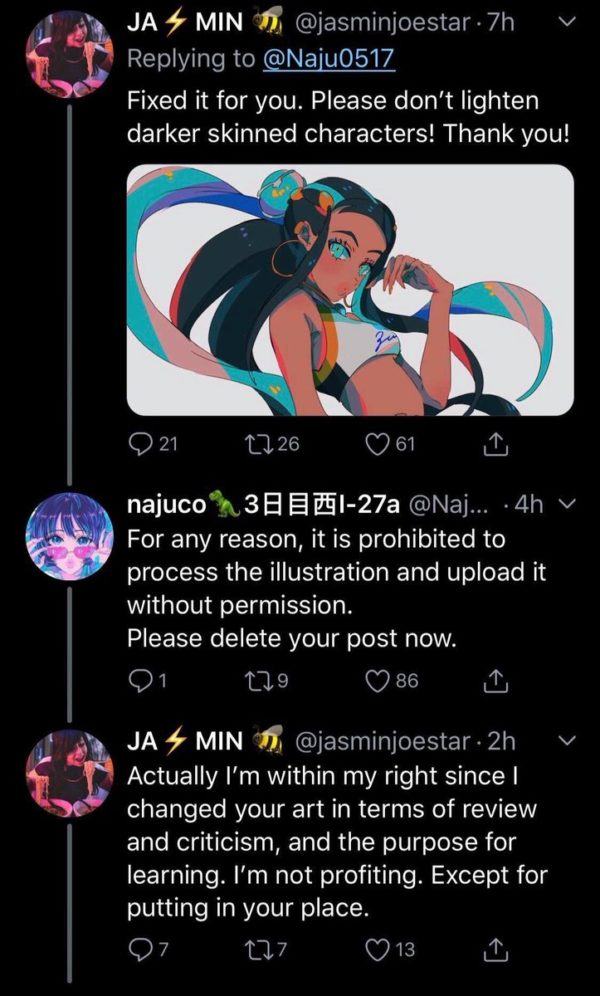 Following this edit, najuco reached out directly to the user, only to be met with a non-apology and a lecture before coming to an agreement which resulted in the deletion of the post claiming to have “fixed” the artwork.

However, it was abundantly clear that most users were disgusted with the insults and vitriol being directed towards najuco, as a significantly larger set of respondents to najuco’s piece are overwhelmingly positive and supportive:

Some people are way too serious with their politics sometimes. Dont mind em and keep up the good work

People asking you to change the skin tone don’t know how palettes and lighting works, you don’t need to change anything. This piece uses a certain palette to suit the style, sort of reminds me of Warhol’s art prints. If anyone has studied art you may have come across that name. pic.twitter.com/VL4a9yhHMz

To people saying this is whitewashed, she is definitely not whitewashed! Its just a more pastel color palette and it’s beautiful! 💕

Keep doing your art! I love it!

What do you think about najuco’s art? Do you think it was white-washed?