The popular account of video game fan and culture commentator Mombot has been suspended from Twitter, with the reason for this ban currently unknown.

Mombot is best known as the Japanese housewife who regularly advocates for the fair treatment of video game consumers and speaks out against the constant ad hominem attacks slung towards the industry and fans. She was also a leading voice in the GamerGate movement, having penned a Medium post discussing the potential role Zoe Quinn’s Crash Override Network played in facilitating online harassment. She also keeps a running list of the numerous, influential anti-GamerGate critics and journalists who have since been exposed for crimes ranging from abuse and stalking to outright sexual assault against children.

Mombot has also been the regular target of harassment, with her opponents claiming that she is neither a female nor Japanese, but is in fact a 32-year old white male named Zachary Miller. These claims rise from an alleged coordinated effort by Mombot and another user which fed anti-Gamergate actors false information in order to expose their hypocritical practice of doxxing.

It is currently unknown why Mombot’s account was suspended. According to a cached version of her account, the last interaction she had was with Forbes video games reporter Paul Tassi. Tassi called for women to share their stores in support of his claim that women were not ‘welcomed’ into gaming, to which Mombot responded by stating that the majority of her online harassment came from games journalists, rather than from earnest fans. (Archive link: https://web.archive.org/web/20190730093850/https:/twitter.com/PaulTassi/status/1155843158288343042)

If any women would like to comment on the “oft-repeated myth” that gaming is often not inclusive or welcoming to women, feel free https://t.co/d8KXsW3IbI 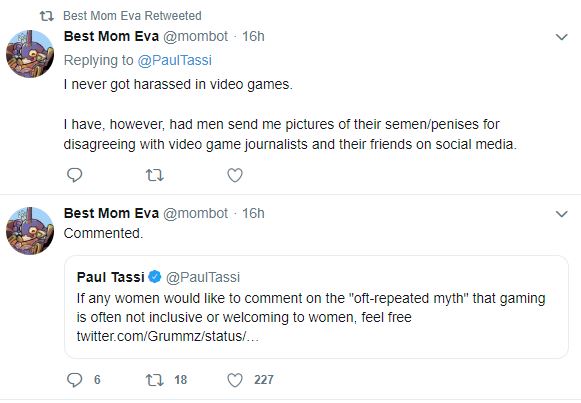 As of writing, Mombot has not publicly commented on her suspension.